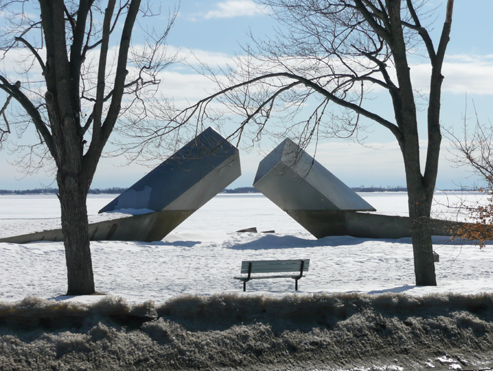 In the early 1970’s, members of the Kingston community suggested the city erect a sculpture in between the Queen’s smokestack and the water purification plant. In honour of Kingston’s Tercentenary (300th birthday), Ontario, Quebec and the federal government all made donations of about $50,000 each which was used to commission three sculptures. The first of them was Time .

Russian-born artist Kosso Eloul was commissioned to create the work in 1973. Time created controversy amongst the neighbours. Some believed it was an eyesore that blocked the view of the lake. Others saw it as a stunning and thought-provoking work of art.

Time is made of an aluminum alloy that was developed at Alcan specifically for this project. This was Eloul’s way of pointing out the plant’s importance in our community.

The meaning of Time has been questioned over and over again. Some believe it represents the passage of time. In fact, rumours have flown that the sculpture was built on a fault line and the two rectangles would eventually touch. This is not true.

Whether you love it or hate it, Time is a part of our scenery in Kingston and is considered a favourite landmark to both tourists and locals alike. Many of us see it as we speed by. Park your car and go give Time a closer look.