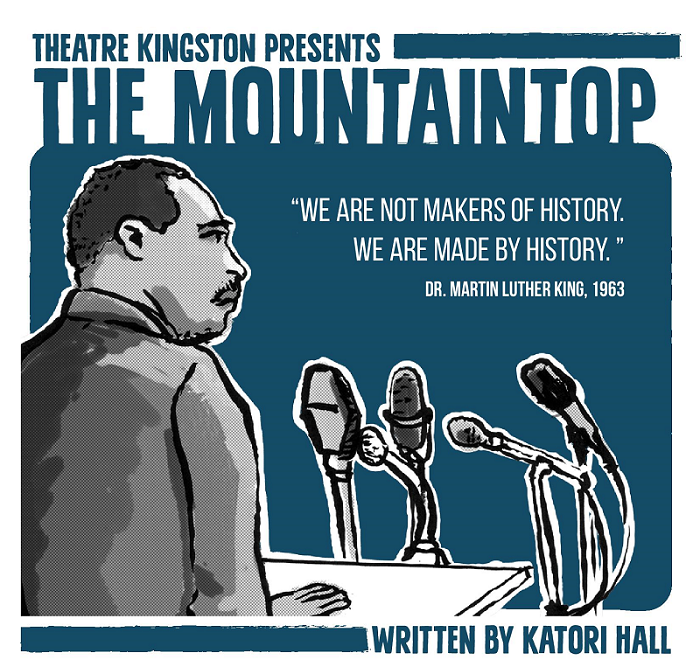 Theatre Kingston was founded in 1990 and has grown and developed into a professional theatre company in its 25 years.  During this time, the company has seen five Artistic Directors at the helm, each adding their own ideas and running new initiatives within the company.  Now, under AD Brett Christopher, Theatre Kingston runs as a fully professional company, producing three shows annually including a series of child/youth engagement activities and working with local theatre practitioners to build a strong cultural voice in the region.

This season will open with Katori Hall’s The Mountaintop.  Directed by Rebecca Benson, this production stars Stratford Festival star Michael Blake and rising star Natasha Mumba.  The play is a fictional re-imagining of the final hours of Dr. Martin Luther King Jr.’s life.  Returning from a prophetic speech during the sanitation workers’ strike, Dr. King has a chance meeting with a mysterious maid, Camae, at the Lorraine Motel in Memphis.  The two engage in intimate and transformative conversations in which the audience hears the hopes and fears of Dr. King the leader, and the man.  Winner of the 2010 Olivier Award for Best New Play, The Mountaintop invites the audience in as King confronts his own destiny, legacy and mortality.

The script is both surprisingly funny and incredibly powerful, and with this cast, it is sure to be the most talked about play in Kingston this Fall. I cannot wait for audiences to experience it.

The Mountaintop runs at Domino Theatre from October 30th to November 15th 2015 and Kingstonist has two pairs of tickets up for grabs for Saturday, October 31st at 8pm and Sunday, November 1st at 2:30pm.  For your chance to win, drop off a comment below, retweet this post or share on Facebook.  Better yet, do all three to triple your chances.  We will select two lucky winners at random next Thursday, October 29th.

If you don’t win, fear not!  Tickets range from $19-29 are available at The Grand Theatre Box Office at 613-530-2050 or online.  This production contains mature language and some mature concepts and is recommended for ages 12 and older.

One thought on “Ticket Giveaway: Theatre Kingston’s The Mountaintop”