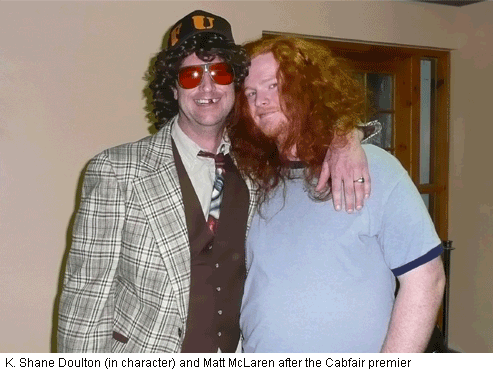 The Kingston Canadian Film Festival wrapped up today with a free showing of Shake Hands with the Devil. Earlier on in the day, I had the pleasure of attending the premiere of Cabfair, which was written, directed, and produced by Kingstonian, and first time film maker, Justin Chenier. Cabfair is a comedic mockumentary that was made on a dental floss budget of $500, though it’s definitely worth so much more. The movie centres around a day in the life of a loud-mouthed cabbie named Reggie O’Brien (K. Shane Doulton), whose antics include: hunting for 8-track cassettes in dumpsters, protesting outside his favorite country radio station, and watching his customers make out in the back seat. Doulton is accompanied by a colourful cast of screwballs including a dog catcher, ex-priest and his porno obsessed boss, who are played by acting veterans and new local talent.

Rather than recount the entire story blow for blow, I’d rather you find out for yourself. At first I was disappointed that Cabfair was only shown once during the festival, however Justin announced during the Q&A session following the premier that The Screening Room has graciously agreed to show his film from March 14th to the 21st. So whether you’re a die hard fan of the Trailer Park Boys or simply a movie buff, Cabfair is one flick you shouldn’t miss. A word to the wise, Chenier claims they drop 599 f-bombs, so this one’s definitely not for the kids. To wet your appetite and give you a bit of insight, please listen to a recording of the Q&A session below.
[display_podcast]