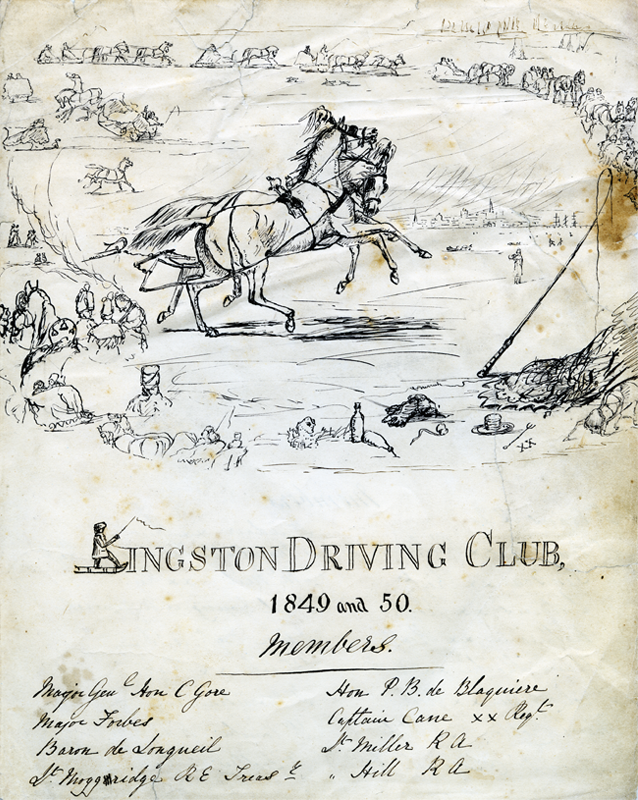 This image is the frontispiece to the Kingston Driving Club Minute book. The Driving Club was a community group made up of Kingston citizens and military officers that gathered together to go sleighing in the countryside around the town of Kingston. The backdrop of the drawing shows the Kingston waterfront with a trail of sleighs, the small xx in the front right corner is a nod to the XX Regiment which made up a significant portion of the club, and the drink bottles are self-explanatory! From the minutes of the January 17th 1850 meeting:

With commendable punctuality, twenty sleighs assembled in the Tête de Pont Bk. Square at two o’clock and on the bugle sounding dashed off in gallant style through the town and thence up the Bath road, turned into the Forty Foot road, and returned by the Village of Waterloo to the starting point where a capital lunch was discussed enlivened by the sweet strains of the xx excellent Band.

Few incidents worthy of notice occurred during the drive, as the club kept admirably together all the teams having much improved in condition since the last turnout. The flight of one gay bird supposed to be a cardinal from its gorgeous scarlet plumage was checked once or twice by those plaguing traces getting unhooked and just beyond the grove inn a gallant Esculapius either attracted by the fair charioteers’ charms or working to exhibit skill at a close shave came in contact with a sleigh driven by a very pretty girl, both however got off without damage. Query? Would this jostle have happened if an ugly old woman had been in that sleigh?

Driving round a sixpence on the ice is highly recommended to all who wish to excel at close shaving.

The Hero of Moultan must again figure in the report having got into difficulty by the loss of a nut connecting his shafts and sleigh but is supposed to have cleverly replaced it with an icicle, as he was duly in his place at the finish.

After lunch the club again drove through the town and turned on Mortons hill, on their return a gallant gunner pulled up under the impression that something having given way he could not “get on” his horses were of a different opinion as they “got off” but were neatly pulled up and no harm done.

The pace after lunch was very rapid, and several sleighs were [left?] “nowhere” on our assembly in the Bk. Square before the disperse,

Longueuil, V.P. for the day.