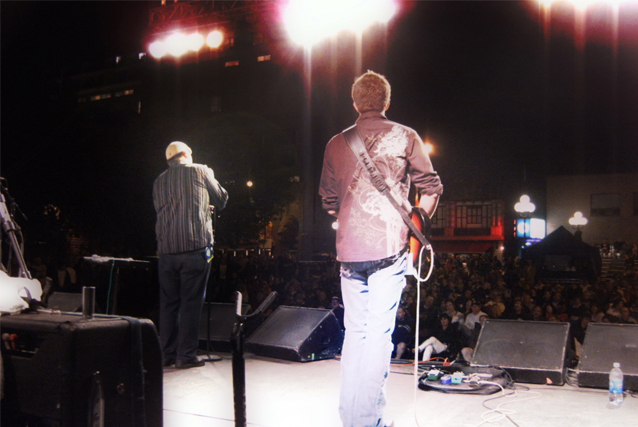 Weekends frequently pass like molasses for most teens in Kingston. As a local teen, I understand that there are an outstanding number of events publicized via Facebook now-a-days, hence there is no excuse to miss extravaganzas such as the Limestone City Blues Festival. This past weekend, I ventured downtown to check out Delta Highway, a blues band from Memphis, Tennessee. Admittedly, this band has concerned itself with the angst and disagreeability of women in their life, something which teen boys can relate to.

My friend Tyr and I were grooving to Delta Highway’s Vocalist, Mr. Santini, who busted out harmonica solos all night long. At one point, Santini encouraged willing audience members to bust a move in front of the stage, however most Kingstonians were content sitting in their pre-positioned lawn chairs. Nevertheless, a funky denim-covered woman took up the offer, owning the dance floor while her friend memorialized the moment with his camera. He later arrived on stage to take photos of the band, which got me thinking.

Soon thereafter I located the stage manager, Michelle, who kindly approved my request to take some unique photos from a backstage vantage point. From this side of the show, I honestly felt the soul of the entire band. It was during this memorable opportunity, when I realized that Delta Highway should claim the fan’s choice award for this year’s festival.  In addition to the snap shot that’s accompanying this post, I also captured a bunch of video footage, featuring Mr. Santini rocking every last inch of his harmonica.

Just before we departed, a friend of the family decided to buy my mother one of Delta Highway’s CDs.  He asked, “which disc has the most harmonica on it? The $15 one or the $20 one?” One bill later, he had presented my mother with “The Devil Had a Woman.”  This was when I decided that the entire band had their ups and downs with the opposite sex. We later retired to the Brew Pub to mull over the fantastic evening, while Tyr and I agreed that we’d have to go on more adventures, more often.

Thanks to the organizers of the Limestone City Blues Festival for bringing everyone downtown for one last, summertime hurrah. I’ll see you next year.

Jay Miller is a Kingston-based video blogger for his personal site JayDaily.com.