Developments of all shapes and sizes were on the minds of many Kingstonians in 2016.  One of the most contentious projects to emerge this past year was The Capitol, pitched by IN8 Developments as a soaring, 18-storey luxury condominium tower along Princess Street.  The radical pitch garnered both support in terms of interested buyers, as well as fierce opposition to its shear size, lack of adherence to official plans and the precedent it would set for our downtown.  With concessions made by way of shaving off a few floors, set backs, adding a public arts space and parking, The Capitol narrowly passed by a single vote at City Council on September 20th.  But wait, not so fast!  Cries of conflict of interest on the part of Councilor Adam Candon were quick to follow, leading to a review by an Integrity Commissioner who determined that there was an inadvertent breach, which opened the door to a re-vote.  With round two resulting in an equal split, The Capitol was temporarily grounded, however a pending appeal to the Ontario Municipal Board could save it from the brink, and ultimately set in motion the slow erosion of downtown Kingston’s unique, historic character. 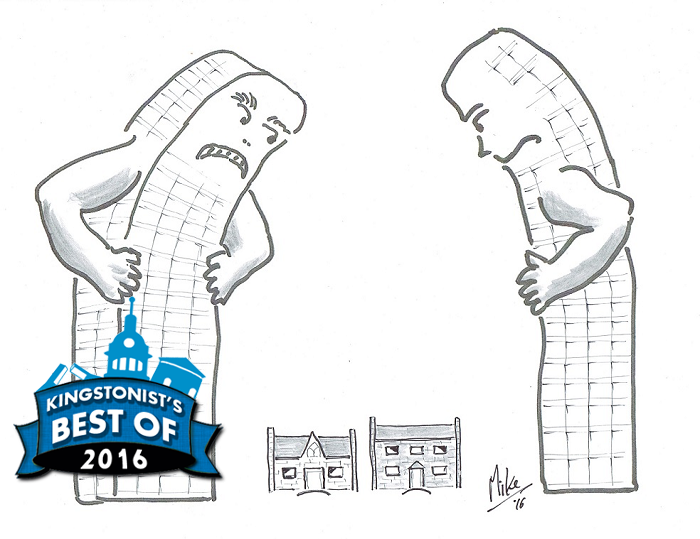 Why did I draw this? Because, like so many, I feel the unique attraction of Kingston will be lost once the first truly high-rise buildings go up. We have mid-rises already.

Kingston unique? Yes, for a start, our waterfront setting is something rare. Then consider the old city itself. Kingston is blessed with a Human Scale downtown where almost everything is walkable and the buildings do not loom. I used to walk to work up Bay Street, I know what looming feels like!

Not only Human Scale but, despite some mid/late 20th Century blots, a city full of varied and beautiful architecture in limestone and brick. The planned 20-storey buildings for Lower Queen Street and the Capitol proposal on Princess will open the way to others, until our old buildings cower amongst the roots of the towers.

Dwarfed, shaded from the sun, bullied into submission and blocked from view they will fade away until Kingston becomes just another North American city.

Bullied because developers are shouldering in, selling apartments not yet approved for construction. Pushing the assumption that the bait of tax dollars will over-ride careful planning. Making careful use of timelines for introducing proposals. Assuming intensification can only be done vertically.

Friends of ours looked at several Canadian cities for retirement – and chose Kingston. They saw it as beautiful and unusual, in that it has the feeling of a small town with the amenities of a much larger city. I suspect many of us feel the same, let’s not spoil it.