At this year’s Christmas parade, Krista LaRocque (née Rini), whom I haven’t seen in thirty years, was greeting the crowd, me included, along the route. Recognition dawned simultaneously: we hugged and agreed to meet for coffee.
She’s brought several mementoes with her, including a t-shirt that bears our school’s simple message, The little school with a big heart. 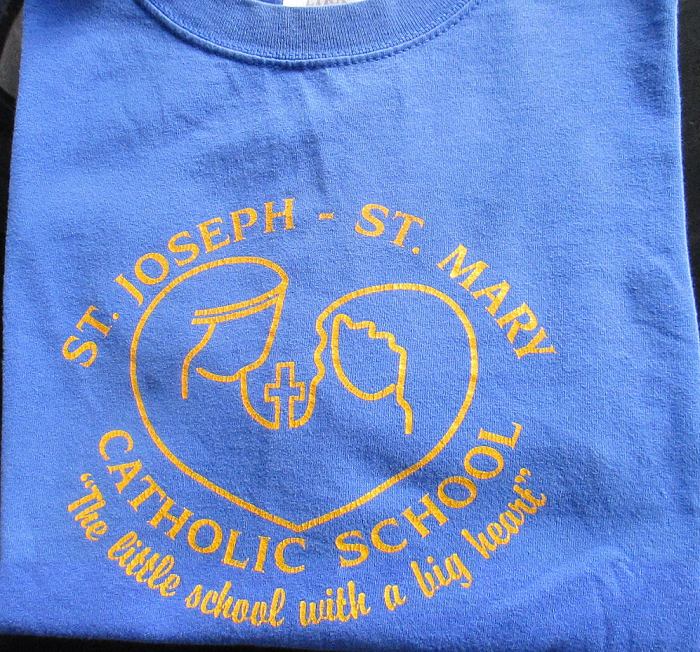 “I have myself coming through the front door,” she begins, “and there’s lots of light in the hallway.”

Most elementary schools have multiple hallways: SJSM is so small that it only has one. As children, we were jealous of the more spacious schools in town. Now, we wouldn’t trade our hallway for anything.

“And I remember the gym,” Krista recalls, taking us on a little journey. “Man, we had a lot of good fun in there! We played floor hockey, and there were masses and celebrations. I wasn’t much of a singer, so I sat beside your sister and basked in her glory.”

Krista was part of a tight group of young girls at SJSM who still keep in touch, even forty-three years later. My sister Mellissa Breault was fortunate to be among this group, as was Beth Finn. 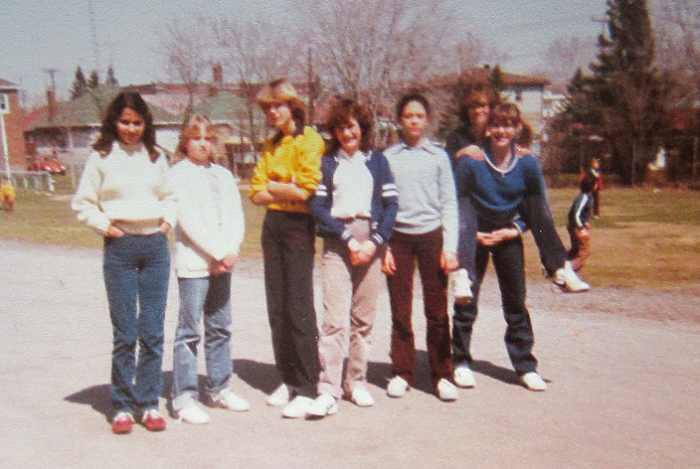 Recently, the city lost a community-minded man in Retired Detective Sergeant Michael Finn, Beth’s father. One testament to the spirit of the school was that many of the group came to the wake. “Mrs. Dowling showed up and she came right over to our little group,” Mellissa says. “We talked about what we always talk about—things like team sports and the time she took our floor hockey team out for a victory treat.”

“That’s right!” Beth adds, laughing. “The other teams didn’t have a chance against the St. Joe’s floor hockey team, what with that promise of ice cream!” 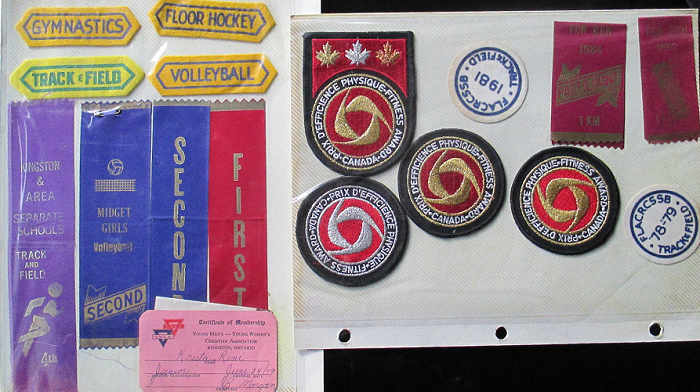 Krista gives some perspective. “It was Grade Four, her first year at St. Joe’s. And she was our favourite teacher.”

At that wake, many of the school’s legacies came to light, including Dianne Dowling’s gift of music therapy.

“She took what she loved,” my sister tells me, “which was John Denver.” Mellissa closes her eyes, reminiscing. “Sometimes, when I’m stressed about something, I repeat those songs and they calm me down.”

“To this day,” Krista agrees, “when I want to connect with myself, I listen to John Denver.” She giggles, her dimples still impish. “I went to a music store one day and asked for his music, and the guy said, ‘Who?’”

“If I learned anything at that school,” Krista confides, “it was a sense of community. In the older grades, we got chances to volunteer. I helped with Mrs. Lollar’s Special Ed class, and there was one individual in a wheelchair. I thought, ‘Wow, we’re all able to be united under one roof.’”

Krista chooses her words carefully. “Tanya passed away in May.” Tanya DeCouto had what the medical community describes as a quadrilateral abnormality: all four of her limbs were misshapen and nonfunctional.  “Because our school offered Tanya a normal school environment, I can now connect with the soul of the person. They may look scary to a child who wouldn’t understand, but they’re here for a purpose, like we are.”

For twenty-six years, this inclusive attitude—another of the school’s legacies—has shaped how Krista interacts with others in her profession as a nurse.

Mellissa would see Tanya at church and at the mall. “She always had her hair done up and was wearing pretty earrings. I thought her very brave to go out all by herself, because she had to rely entirely on others. So many people are afraid to ask for help, but Tanya would let people in. I’m sure she changed people’s lives.”

Intrigued, I have coffee with Carol DeCouto and Chris DeCouto, Tanya’s mom and brother.

“That ramp to the front door was built for Tanya,” Carol shares with me, proud of the big-hearted school. “And because the regular desks were unsuitable, the school had a couple designed just for her.” Carol shares photos with me: there’s one desk for regular school work and one that allowed Tanya to enjoy floor work, with her classmates. Tanya is glowing in these photos. 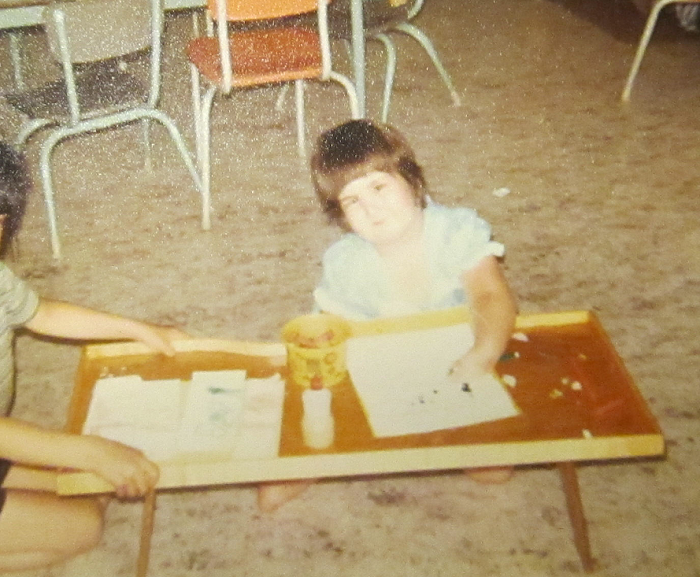 “Did you feel protective of her?” I ask Chris. “Were there times you had to do things for her, or step in?”

“No!” Chris replies, a little surprised at this idea. “She was very independent and always off doing her own things. Tanya was just my big sister.” I can’t begin to imagine how different Tanya’s reality would be to mine, yet she was supported in her family and at her school, allowing her to live the kind of impactful life to which we all aspire. 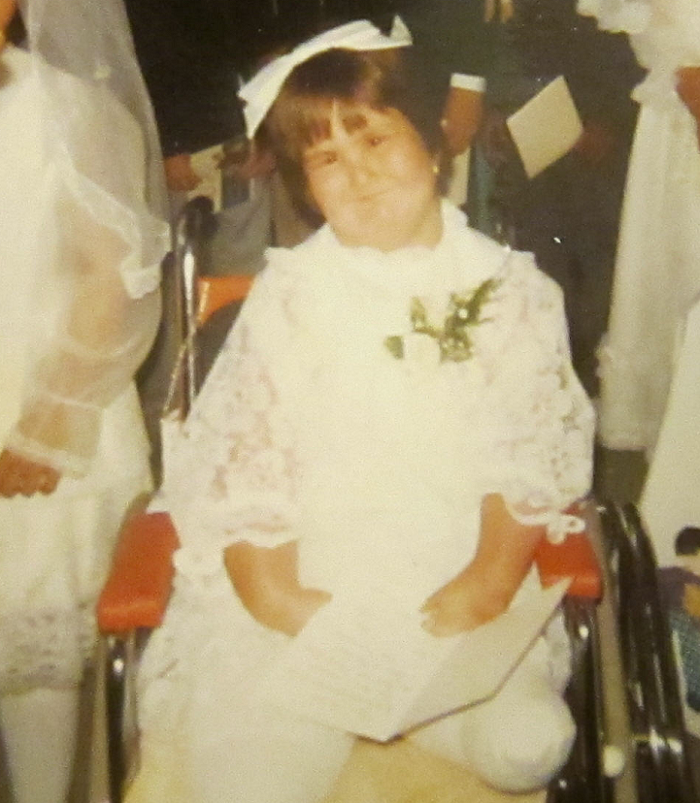 Another part of Krista’s virtual tour down that single SJSM hallway is the staff room. “We thought we were big cheeses when the teachers asked who wanted to clean the staff room,” Krista shares, her hand shooting into the air unconsciously. “I do!” she volunteers.

My sister’s smile fades. “I was too shy to volunteer,” she admits, a fact that surprises me. My sister is now herself a teacher, in charge of a one-room school. I would never describe her as ‘shy’. “When I got to Teacher’s College,” she tells me, “I had to do volunteer work. It was from watching Krista and the others that I could get up the nerve to do it. It was a hugely rewarding experience.”

“And, in the yard,” Krista continues her reminiscences, “there were these big, concrete slabs.”

“Yes,” laughs Beth. “They sat mysteriously against the back of the gym. I still wonder what they were hiding.”

“Maybe hidden treasure!” the five-year-old in me suggests.

“We met there outside of school and then we’d head over to Churchill Park. Sometimes, we brought a picnic—maybe grape Kool-Aid and baloney sandwiches. We sat under a crabapple tree, where we could see and hear the little waterfall and the pond, and it was shady.”

“Why did you choose that spot?” I ask.

“Well, with one living on Victoria, someone else on Regent, another on Ellerbeck, and me on Carruthers, it was central. It wasn’t far from home and we all felt safe.”

Only a couple of moments in our childhood didn’t feel that way. These reminiscences at Detective Sergeant Michael Finn’s wake remind me that there are many who look out for our community. In carefully worded but kind texts and email, Beth demonstrates one more legacy, of the integrity that I have come to expect of SJSM graduates.

Her email signature indicates that her career choice was also teaching, but more telling is her title: DREAM Team Supervisor.

When I ask Dianne to share memories of Krista, Mellissa, Beth and Tanya, she declares, “ … these girls were leaders in making the class a community.” 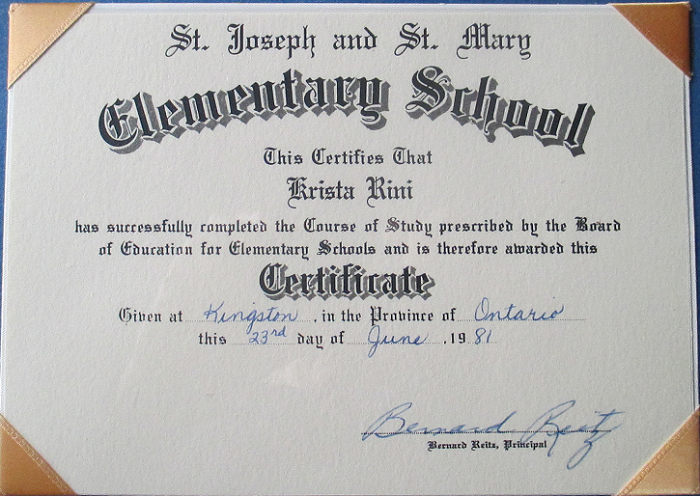 This tight group of giggling young girls from SJSM have grown into open-minded and inclusive women, solid citizens who have a quiet but undeniably big-hearted effect on their communities.