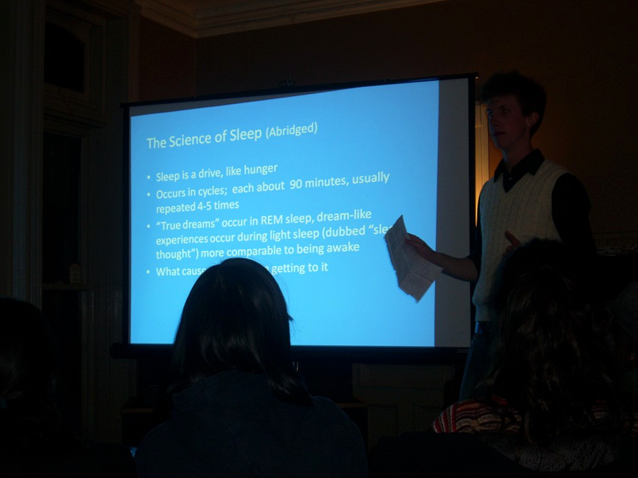 Queen’s University catered to the intellectually curious Monday evening when the TEDx discussion group held its latest meeting at the Grad Club.

A small crowd of about 30 students and professors viewed a combination of video clips and original student presentations extrapolating on topics from the nature of creativity to tips for the perfect nap.

TEDx refers to an independent offshoot of TED (Technology, Entertainment, Design), an American non-profit organization with the slogan “ideas worth spreading”.  The original TED gained a large following on the internet through its ubiquitous TED Talks, video clips in which prominent individuals give 18-minute lectures on scientific and cultural issues.

According to the website for the Queen’s group, “TEDx is a program of local, self organized events that bring people together to share a TED-like experience. At a TEDx event, TED Talks video and live speakers combine to spark deep discussion and connection in a small group.”

“It’s for the sharing of ideas,” said Phillips of the group’s philosophy.  “[It’s] asking students to break outside their shells and think about things that are maybe outside what they’re studying in school.  It’s also a promoting event for the [TEDxQueensU] Conference.”

That conference is tentatively scheduled for November 6, 2010.  Bringing speakers from across Canada to Queen’s for a half-day lecture series, the event would mark a high-water point for the fledgling discussion group.  Fundraising and the search for sponsors have already begun.

But on Monday night, the focus was on more abstract thoughts.

The evening’s lectures began with an official TED Talk by novelist Elizabeth Gilbert on “A New Way to Think About Creativity.”  Musing on the historical association of creative genius with mental illness, Gilbert advocates a return to classical concepts of creativity as an external force to be harnessed by the human mind.

After the video, second-year civil engineering student Cian O’Neill-Kizoff began his own presentation on the subject of cat naps.  Following a discussion of different scientific explanations for our need to sleep, such as “body restoration theory”, O’Neill-Kizoff lightened his approach.

The perfect nap, he explained, depends on a variety of factors, including setting (light, warmth, sound), timing, commitment (“There are no half-hearted naps!”), and length.  He detailed the pros and cons of different napping positions, such as “The Thinker” – highly recommended for students inconspicuously falling asleep during lectures – the belly flop, the fetal position, and the hard-partying “group spoon”.

Finally, O’Neill-Kizoff answered the question “are naps good for you?” with an emphatic “yes!”, pointing to the prominence of the siesta in Latin cultures, the lowered risk of heart disease – especially among working men – and the convincing equation “time lost napping < time gained by productivity.”

Alina Kulesh, a third-year student and director of the 2010 FOCUS Film Festival, used the next segment to talk about that year’s event and screen three of its award-winning short films.  Her selections included Best Picture winner “The Camera”, in which a second-hand camera yields a gruesome discovery; the violent, Tarantino-esque “Frankly My Dear”, detailing a drug deal gone bad; and the surrealist “Nobody’s Perfect”, whose protagonists find comfort in mutual missing body parts.

Phillips’ own presentation, “Hermits and the Life of Seclusion”, was inspired by the recent death of reclusive Catcher in the Rye authour J.D. Salinger.  Phillips distinguished hermits from recluses through the former’s more religious overtones.  He based his reasoning on the origins of the word “hermit”, translated roughly from the Greek for “desert-dweller”, and its links to early Christianity in stories such as Jesus overcoming the temptation of Satan.  In each case, seclusion from society was a means of testing one’s faith.

Phillips invoked fictional hermits, such as Yoda and Obi-Wan Kenobi from the Star Wars films, as well as real recluses, such as English cult hero “Fred” Stawinoga, To Kill a Mockingbird authour Harper Lee, and Calvin and Hobbes cartoonist Bill Watterson.  In analyzing Salinger’s own isolation from society, Phillips suggested the author was a hermit, rather than a recluse, because of his perceived Buddhist leanings.

Salinger, he argued, saw people as “phonies” whose rigid social expectations only further stoked his desire to escape.  Phillips drew a parallel to the Japanese phenomenon of hikikomori, in which people isolate themselves in their homes and shun all human contact.

The evening was bookended by another TED Talk with British authour Ken Robinson, “Do Schools Kill Creativity?”  Robinson points to the fact that more people are graduating today than at any point in history and that university degrees are rapidly becoming useless through such academic inflation.  Arguing that it is the interaction of different ways of looking at things that yields creativity, Robinson calls for a new system of “human ecology” to contest a traditional education system he feels has “strip-mined human consciousness”.

TEDxQueensU meets at the Grad Club every other Monday at 8:30, and next convenes March 1.  To get involved, e-mail [email protected].