Over the next two weeks, Kingstonist will be counting down our best posts from 2011. The list includes a diverse mix of topics that are near and dear to the hearts of our volunteer contributors. Rest assured, we’re already working on some interesting stories for 2012, but we’re suckers for best of and top 10 shows.

On the 2nd of May, Kingston and the Islands went to polls to elect a successor to long-standing MP, Peter Milliken. When the last ballots were counted, the Limestone City remained a Liberal stronghold with Ted Hsu emerging victorious. During the the lead up to the 2011 Federal Election, we got a chance to interview Hsu, while his responses were inspirational and heavily influenced by his experience with sustainability. Revisiting the interview, it’s clearly one of the best offerings from 2011. 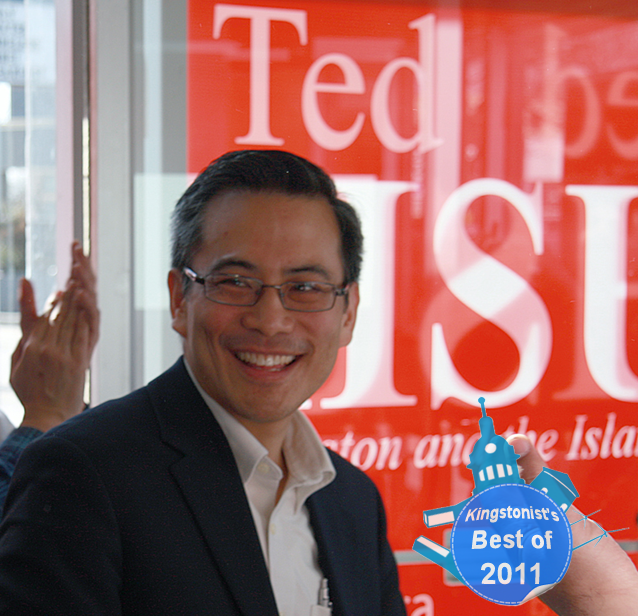 Today we’re featuring the third and final MP candidate interview with local Liberal Party representative, Ted Hsu. I would encourage you to read and compare his responses with those provided by Eric Walton and Daniel Beals respectively. By posing a standard set of questions to each candidate, we’ve been able to gain insight into their priorities and positions on various local issues. With any luck, our latest round of six questions, which included fantastic input from our readers, will prepare you to get out their and vote on May the 2nd.

1. What do see as the biggest challenge facing residents of Kingston and the Islands over the next five years? Further, if you are elected as our federal representative, how do you propose to solve it?

The biggest challenge facing residents of Kingston and the Islands over the next five years is the same one we face globally, and we’ll continue to face for many years to come.

The history of civilization is marked by adoption of innovations in science and technology – quite often driven by crises. In the face of such crises, societies undergo tremendous upheaval that eventually gives birth to a radically new economic base. Whether one chooses to believe that the cause is man-made or natural, global warming is presenting the most serious crisis mankind has faced. We’re only just beginning to see its disruptions in the cost and security of food, water and fuel. But that disruption also presents opportunity.

We must focus on Kingston’s economy, in particular to attracting and/or incubating new businesses in Kingston and the Islands – businesses whose contribution ensures that we leave no member of our community behind.

Rising fuel costs will shorten supply chains. This will re-introduce the opportunity for localized manufacturing for a localized – and global – market (this alone argues for immediate reinstatement of the prison farm program). Our economic future is dependent on our moving towards tomorrow’s digital, clean resource, health and biosciences technologies.

My background is as a scientist and as an international business leader. I’m trained and experienced in dealing with complex issues. For the last several years, my work has been focused on building in southeastern Ontario the network of partnerships and technologies that will be the basis of tomorrow’s economy.

2. The federal Prison Farm program was terminated last year due to supposedly high costs, and to provide more relevant employment skills to inmates. Do you agree with the reasoning behind the closure? If elected would you commit to re-examining the Prison Farm rehabilitation program?

In my Canada – in Michael Ignatieff and the Liberal’s Canada, “Paying Our Way Through Agriculture” remains a noble and priceless objective.

For reasons that Stephen Harper and his local candidate cannot – or will not – explain to Canadians, a cost-effective program that supplied locally-produced food to the penitentiary system and instilled in inmates the characteristics we so admire in the Canadian farm community – hard work, discipline, compassion and pride – is to be replaced with an $13 billion program that finds its reward in caging fellow Canadians for increasingly mean-spirited reasons.

The Liberal party is unequivocally committed to restoring Canada’s prison farm program, incorporating into it new skills-training opportunities such as green agriculture.

3. While most candidates will agree that all Canadians should have access to the Internet, what’s your position on usage-based billing? Should the government intervene and stop plans to meter bandwidth and charge consumers more?

While bandwidth caps are a concern in Canada’s urban centres, we are at high-risk of leaving rural Canada behind in the digital world. For that reason, the Liberal Party has identified as a priority the achievement of 100 per cent high-speed internet connectivity everywhere in rural Canada within three years.

At a personal level, I note increasing dissatisfaction in the Canadian population for a regulatory framework that supports a competitive environment in which cellular phone costs are some of the highest in the world and limits competition in provision of broadband service. Taking best advantage of new technologies will likely require a review of the regulatory/competitive environment.

4. As out population continues to increase, and a greater proportion of Canadians enter retirement, the availability of health care becomes increasingly vital. Are you concerned that the nation is headed towards privatization, or a two-tired health care system? Would you do anything to protect public health care?

I don’t believe in privatization of health care and/or a two-tiered system. I do believe in investment in achieving efficiencies, in planning ahead (e.g. the Liberal’s Brain Health strategy for addressing Alzheimer’s and dementia), in technologies such as e-Health, and in support of Canadian families who are providing homecare for the elderly and infirmed. None of this takes away from the Liberal commitment to healthcare as expressed in our national platform:

Liberal governments brought in universal medicare and passed the Canada Health Act. A new Liberal government will bring a robust, renewed commitment. For Liberals, as for most Canadians, universal access to quality, timely care regardless of your ability to pay, and regardless of which province you live in, is part of what defines Canada. It is embedded in Canadian values, and in the Liberal record. Under Liberal leadership, the federal government will return to its long-established role as a strong partner in health and healthcare.

5. It is increasingly argued that changes to the electoral process need to be made in Canada. The most popular proposal for electoral reform is mixed member proportional representation. What are your feelings towards this kind of reform, and do you feel it will encourage more people to vote?

I rather suspect that political science students will one day look back on Campaign 2011 as the spark that ignited electoral reform in Canada. Stephen Harper’s tireless effort to demonize coalition government has backfired – prompting, instead, a much-needed discussion on how we are represented.

6. Kingston has made some modest strides over the past few years to become Canada’s most sustainable city. What are the key environmental areas that you feel the city needs to improve upon? If elected, how would you and your party support continued green development in the Limestone City?

While we’ve seen tremendous recent improvements in public transit usage, Kingston tops the list of Canadian cities for high levels of gasoline consumption per capita. And yet, we live in a relatively small city where just about everything is closely at hand. I’ll use my expertise in green energy and my demonstrated record in organizing the regional sustainable energy community to get Kingston out of this “hall of shame.”

As noted in Question 1 above, more broadly and in the longer-term, we must move our local economy to the green energy and technology economy of tomorrow. As the Member of Parliament for Kingston and the Islands, I will use my scientific, technology, business and organizational skills to help the community make that happen.