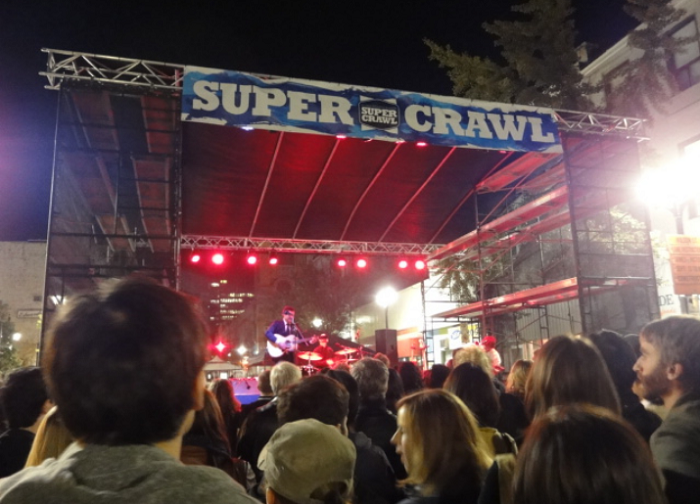 This past weekend, I finally made it to my hometown of Hamilton to check out their annual music and arts festival, Supercrawl.  Named after the many weekly art crawls that take place in Hamilton, the free event, now in its fifth year, is a celebration of the arts and features 4 music stages, a fashion stage and about 5 blocks of artisan tents and food trucks.  James Street North, where the Supercrawl festival is held, is completely closed off to traffic and is the newest hotspot in the Steel City.  Over the last few years, there has been a takeover of this downtown street by art galleries, locally owned shops and restaurants, music venues and even their own branch of the CBC.

The festival shuts down James Street from Friday-Sunday of the second week of September, allowing only pedestrian traffic for the three days.  People of all ages and walks of life come out in droves, filling the street and, in many cases, showing off their dance moves.  The musical talent showcased during Supercrawl is nothing to shrug about.  This year’s line up included The Arkells (Hamilton’s sweethearts), Rich Aucoin, Polaris nominated Hamiltonian Jessy Lanza, DJ Kode 9, the newly formed poppy, punky, Operators, American rockers Spoon and folk musicians Bry Webb and Oh Susanna.  But this is just scraping the surface, over 40 bands played over the course of the weekend, and planners also made of point of taking the time to boast their own with performances by The Hamilton Philharmonic and The Hamilton Children’s Choir.  A family area was also featured, complete with children’s activities and live music.

I’ve lived in Kingston for nearly 15 years now but I grew up in the Hammer and have always drawn similarities between the two cities.  Both Hamilton and Kingston have a diverse population ranging from blue collar workers to doctors and professors and, of course, students.  Kingstonist has visited the idea of Kingston playing host to similar festivals in the past.  Our 2010 discussion on Nuit Blanche brought in a lot of opinions about why such an event could or could not work in YGK.  After finally experiencing Supercrawl for myself, I am more convinced than ever that we could pull off something similar.  July’s Princess Street Promenade is a great place to start and next weekend the city will host the first ever fall version of the day long event.  Why not take it a step further?

When the students arrive in September, Queen’s holds events to welcome them back and to celebrate the start of a new school year.  The sidewalk sale on University Ave. is always a big success and this year, for the first time, Queen’s will host a music festival called Q Pop! that will feature a very impressive line up of musicians.  The only problem is, you have to be a student, staff or alum to attend. So what about an inclusive event that brings the Kingston community and the Queen’s community together?  A festival such as Supercrawl in downtown Kingston, could be a great way to kick off the school year and create ties between the two.  Not only that, but it would be excellent for downtown Kingston’s shops, galleries and restaurants. The event in Hamilton ran until 11pm on Saturday night and the shops along James Street North had their lights on and doors open the whole time.  It also brought in a lot of folks from other cities – even Torontonians left their metropolis to take in the festivities.

So this week, we want to know:

Could Kingston host a weekend long festival like Supercrawl?

Hamilton’s population is nearly 5 times that of Kingston but I was impressed with how the event flowed and how well behaved festival goers were.  It felt like a safe space with a happy, celebratory vibe.  I think Kingston could benefit a lot from trying out our own version of Supercrawl.  What do you think?  Could a weekend long music and arts festival work in YGK?  Tell us why or why not in the comments below.

Thanks to Sari for today’s pic.

3 thoughts on “Should Kingston Host a Supercrawl?”