In the wake of Writers Fest, our readers were treated to numerous interviews with the likes of Michael Lista, Sarah Tsiang, Diane Schoemperlen and of course, Steven Heighton.  As luck would have it, many folks interested in Heighton’s work were attracted to our interview, which went on to record a very high level of traffic.  Accordingly, you can plan on us connecting with us more local writers leading up to and following next year’s Writers Fest. 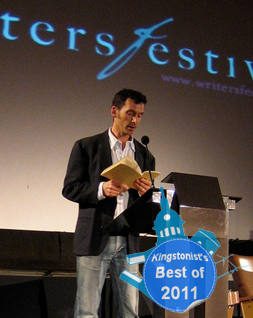 I often think about Steven Heighton and what best describes my thought is perhaps a quote from his paper, that’s on his website, On Trying to Wear Al’s Shirts: “How do we come to wear the shirts of mentor poets?” Heighton is the tallest of the Canadian writers alive today, and he resides in Kingston, Ontario. Over the phone, before the Kingston WritersFest, we spoke.

1. I just wanted to start off with this: talking with John Lazarus [of the Drama at Queen’s University], I told him that at my cottage this summer an old Walrus brought me one of your uniquely styled fictions: Noughts & Crosses. I explained to Lazarus the story’s section about the sealed-off passageway “thirty feet under Brock Street” and questioned him as to whether he believed it was true. He replied, “that sounds very Heightonesque.” Could you describe what you define as Heightonesque?

“Let me tell you first: that passageway, that tunnel, it was for real. If you go to St. Mary’s Cathedral, they have some pamphlets by the entrance, with info about the church, and it’s all in there.” About being Heightonesque, he said, “that’s the sort of thing you have to ask other people, readers, reviewers.” He continued, “You don’t want to know too much about your own process–you might get too self-conscious.” I added a question about distorting the perception of truth, and if he thought he employed any magic realism for the sake of exploring that theme. “Like Gabriel García Márquez? No. I’m not a magic realist in thsat sense of the term.” But, he added, was not strictly realist.

2. I know you had a very personal relationship with [Al] Purdy, and I want to know if you can describe the influence he’s had?

His influence . . . it was especially a matter of his confidence in me, his friendship and hospitality. Those were tremendous gifts. A number of his best poems did have an influence on me when I was learning to write, but on the whole I have to say that other poets–Hopkins, Dickinson, Yeats, and several others–influenced me more than he did. Hopkins especially. I can see that by looking at my early poems. As for Al, I really liked him, man to man, and we got along fantastically. I do love his best poems, they’re among my favourites, but, as I say, when I consider the tone and texture of my own work now–the register of the language, the formal concerns–I don’t see his shadow in a big way. His influence on me was more as a generous yet tough coach, sometimes encouraging me, sometimes kicking my ass.

3. Besides being on the board of directors for the Kingston WritersFest, what work are you doing right now?

I write full time. Fiction fills the fridge, in a modest way, and I also write poetry and short stories, as well as doing a few teaching stints and residencies. . . . From the point of view of ‘work,’ there’s no ‘living’ to made from poetry, of course, but I keep writing it because I need to–it’s at the heart of my life.

4. How should the Canadian poet see Kingston, Ontario, as opposed to Toronto?

I can’t say how other people should see it. For me, the choice to live as a writer in Kingston has been a good one. Like it or not, Toronto is the cultural capital, our imperium, and the distractions there are formidable–two or three or more readings per night, literary ‘galas’of various sorts chequering the calendar, etc. etc. I think if I lived there I’d find it hard to focus on the real work. Also, life is cheaper in Kingston, so I can survive here as a fulltime writer.

5. Now, on the Canadian identity. You wrote in reply to Borges, Some other just ones, and quoted his original: These people, without knowing it, are saving the world. Is the position of the Canadian poet one of necessary naïvety, and what can you say positively about the purpose of a writer in Canada?

Oh, man. That’s a huge question. One thing I’ll say is, although it’s not the purpose of poetry and fiction to teach anything–poets and literary fiction writers just write what they have to–there is an incidental sociopolitical benefit, if the writing is any good. Good literature encourages the habit of empathy–the ability to imagine the private loneliness of another life. And that habit is crucial to our survival, on an individual and a global level. But there’s another benefit, for the writers themselves: over time, practicing writers become more empathatic, because they has to imagine the distinct solitude of other people, some of them very different from themselves.

6. What recommended reading can you offer to Canadians, non-Canadians, artists or non-artists?

I can never answer these questions. My mind goes blank. But let me see. . . . This year I’ve declared a sort of moratorium on reading contemporary and Canadian books–I’m trying to read further afield, to broaden myself, trying to catch up on some of the classics I haven’t read. So I’ve been reading James Salter (OK, he’s a ‘modern classic’), and man, a lot more people should be reading him. His short stories. Such density and concentration! What reverence for language! I’m also catching up on some older classics I’ve never read, like Stendahl’s Le rouge et le noir (in French) and Proust’s magnum opus (in English, I’m afraid)–great books I should have read long ago.

Do you have any final remarks for our readers?

In my new book–a small collection of memos and fragmentary essays called Workbook–I have a section called ‘On Reading: 15 memos to myself.’ I’ll offer one of the memos here: ‘Reading great prose or poetry is like undergoing corrective laser therapy: it sears away the cataracts of habit.