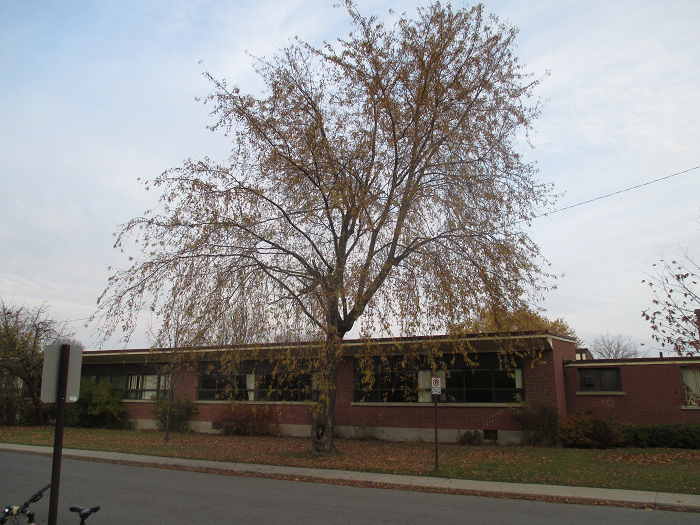 It’s baffling. Standing beneath the St. Joseph/St. Mary (SJ/SM) Catholic school office window, I’m eyeballing the ledge, more than six feet above the ground. This is how my nine-year-old tomboy self climbed to the roof in search of lost balls. I couldn’t manage it now, so how did I do it then?  John Corrigan is amused at my bewildered inspection. Mr. C, as everyone calls him, reminds me of a stump that once existed under the window. Even in a departed state, trees find a way to give. “I’ve been blessed to be here for twenty years,” says Mr. C, the sole teacher in the school’s final year. He tends a compact class of Junior/Senior Kindergartners. “When I arrived, there were a hundred and forty kids at the school.” The neighbourhood has become expensive—family homes selling to become
student housing—and French Immersion is attracting families to the downtown core. And so, the school is slated to close.

Elementary-aged children may not live here anymore, but the schoolyard is far from deserted. Compared to the yard I played in, it’s downright crowded. There are commemorative trees and shrubs everywhere.

Not far from where we stand is a mature red maple, spectacular in its autumn colours. The tree peers into the school library, by design.

“There was some bad flooding in Manitoba, like there seems to be every year,” Mr. C shares. “We wanted to fund-raise for a school in Rosenort.” There had been considerable water damage, so any funds raised would be welcome.

Even with reduced numbers, “ … we still raised a couple of hundred dollars,” Mr. C reminisces. “The cheque was mailed off and in return, we received pictures of kids with new library books. It was cool to see that connection.”

“A few years later, the Ice Storm hit Kingston. When we finally got back into school, a cheque arrived by mail from the school in Rosenort. They’d raised some ridiculously large amount, like seven hundred dollars!” Mr. C’s voice is tinged with embarrassment.

“Wasn’t it just that you couldn’t get into the building?” I ask. “There wasn’t much physical damage done, so how did you use the money?”

“We bought more books for the library,” he tells me, “but we also bought a tree, to remind us of that connection between the schools. This maple.” We are both looking up into the crimson canopy now, aware that this sturdy creature embodies a kind heritage, between strangers. “It was a learning moment for everybody,” he comments, pleased.

Inside, Mr. C leads me to a framed photo of a pretty child, smiling broadly. “This was one of our students,” he explains. “She needed a lung transplant, so the family moved to Montreal to await a donor.” My fingers stray to her hopeful face. “She passed away in the spring that year. A tree was planted in her memory.”

Dianne Dowling, a retired teacher who continues to volunteer her time, appears at my elbow. “Hers is the large oak out front,” Dianne quietly offers. The tree is magnificent.

On a tour, I’m introduced to a flowering shrub at the front entrance, commemorating Nadia Luciuk, a past principal. A teacher named Mrs. Neeley requested a linden tree, also out front and looking vibrant. And then, there’s Arthur.

On the fiftieth anniversary of the school, a tree was planted near the playground structure. “Before the dedication,” Dianne shares, “we wanted to host a contest to name the tree, to give the kids a connection. It didn’t happen. At the ceremony, Father O’Connor surprised us by naming the tree after Arthur Owens, a great-uncle of an early priest in the parish. It was perfect: the kids remember ‘Arthur’ because of the storied aardvark!”

Arthur has already lost his leaves, but his up-stretched canopy belies the friendly optimism of an elm. “Kingston trees are robust,” I comment. “They seemed better equipped for last winter than Toronto’s urban forest.”

“After the Ice Storm,” Dianne says, “workers from across the province offered to assist Kingston with the cleanup. A utilities company worker suggested to me that, ‘There must be a lot of tree huggers in this town.’”

There are certainly tree huggers at this school. With hardly a second thought, our committee arranged for the city to plant one final tree—a Liriodendron tulipifera, or tulip-tree—in the north-east corner of Churchill Park, to commemorate SJ/SM’s closure.

On the appointed day, we are all watching out the school windows for the city workers, who are doing several plantings at once. During afternoon recess, a large truck appears: young trees are piled in the back. After consultation with school staff, a single tree—our tree—is gingerly lifted from the pile and placed in a backhoe for transfer to the planting site. The most apparent feature at this distance is an enormous burlap sack wrapped around our tree’s roots. 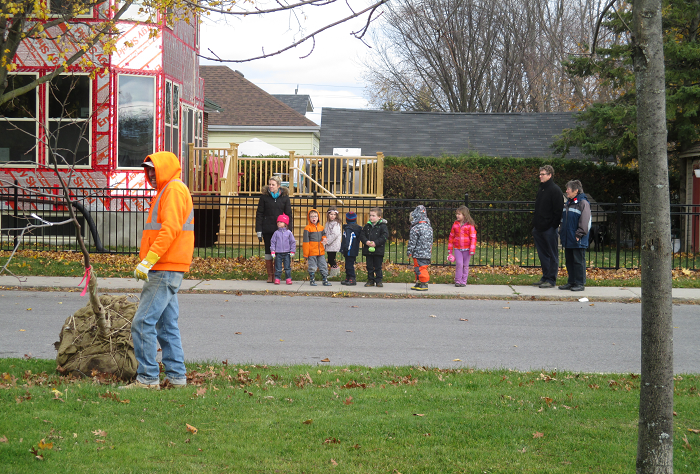 Students are bundled up and ushered to front-row seats on the sidewalk, across the street. We watch as a hole is dug to precise measurements, into which our tree is then placed; the sack is removed from its roots, which are buried in dirt and then mulched. An explanatory plaque is inserted at the foot of our tree.

When it’s safe to visit, the students draw near. The teachers’ faces betray their doubt. Up close, the tree is completely leafless and stickman-skinny, a disappointment. Sensing a need, the children busy themselves. Two quietly collect leaves dropped by other trees. One asks if they can have our tree’s ID band. Another suggests, “We should call her Zippy!” Everyone concurs readily. These children are actively welcoming their tree to the SJ/SM forest, utterly assured of its chances. Having worked with urban forestry programmes in Toronto, I am also feeling confident of Zippy’s future. 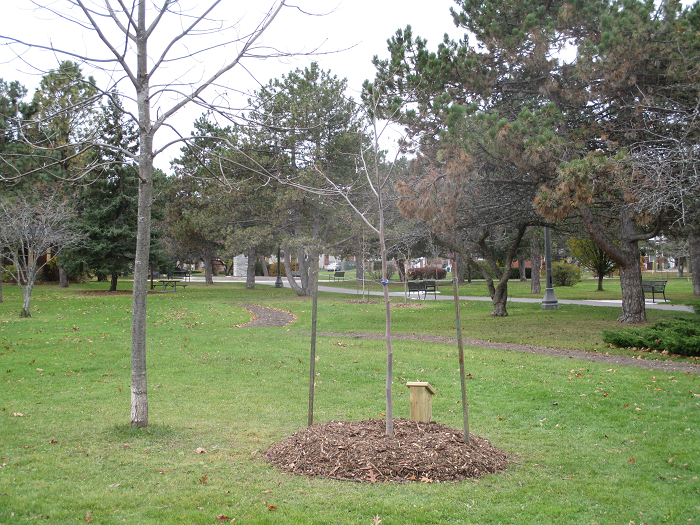 Tulip-trees have straight trunks and irregularly shaped crowns. Their leaves are vaguely feminine, lobed with a distinct notch rather than a tip. These trees bear romantic flowers, large and brightly coloured, and tulip-shaped, a sweet reminder of the past to the future. But the best part is that a tulip-tree, a magnificent native of the Carolinian forest, can grow upwards of seventy feet tall. This tree will release enough oxygen annually to support two or more people, about two hundred and sixty pounds of it each year. Her shade and wind buffering will draw more people to the serenity of Churchill Park. And over the course her life, our Zippy will likely absorb an entire tonne of carbon dioxide.

Wrapping my fingers gently around her slender trunk, I hug our new addition. 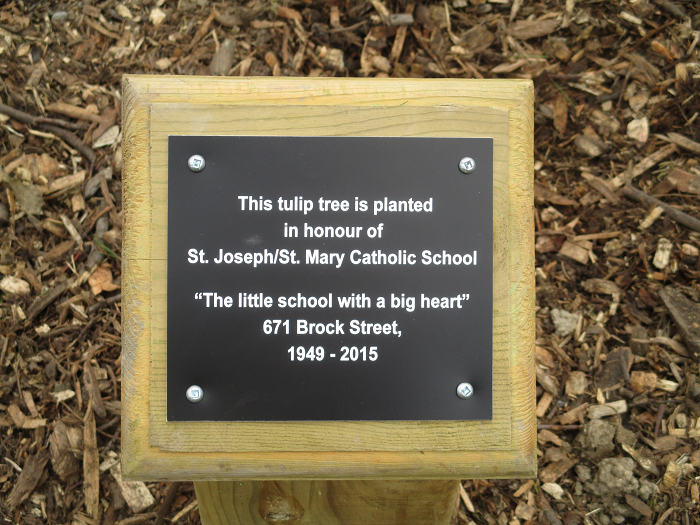 Later, Mr. C watches me rootle through my pockets. “A student was learning to write stories,” he tells me. “All day long, she’d appear with brief notes for me. ‘I brought an orange.’ ‘We have a dog.’ One day, she gave me a note while I was distracted; I promised to read it later. At home, amid the paper clips and Kleenex in my pocket was her simple story, ‘My grandma died.’ Of all the days to not read her note! You can’t know which moment will be the one where your reaction might have a profound effect.”

SJ/SM celebrates its community—teachers and students, strangers, those beloved and less so, those who dutifully assist and those who receive. Everyone’s contribution is honoured. As our time on this property comes to a natural end, we pass this tradition on to the urban forest, an inherently giving life form.