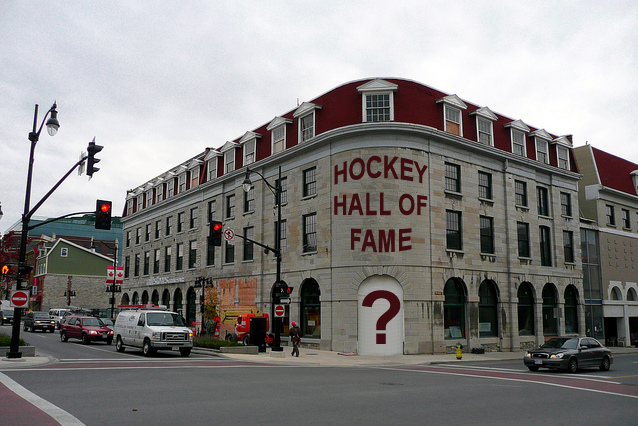 Last July, beloved hockey commentator Don Cherry lent his support to a proposal to re-locate the International Hockey Hall of Fame (IHHOF) from its York Street location to the historic, newly renovated Smith Robinson Building.  Presently, the IHHOF is tucked away in an aging two storey building on the southeast corner of the Memorial Centre grounds.  Mark Potter, President of the local Hockey Hall of Fame, recognizes that the Hall’s location is the main reason this hockey shrine has been unsuccessful, which is especially true since the relocation of the Fronts to the K-Rock Centre.  Therefore, rather than waste an estimated $1.4 million renovating the current IHHOF facility, City Councillors will be presented with three options at Tuesday’s council meeting, effectively shaping the future of the the International Hockey Hall of Fame.  The most contentious option being brought forward, at least from the perspective of taxpayers, is for the City to invest $400K to relocate the IHHOF from York Street to the Smith Robinson Building.  Accordingly, this week’s poll question asks:

Should the City provide $400K to relocate the IHHOF downtown?

While I sympathize with the locationally-challenged IHHOF, and firmly believe that a downtown museum would fare far better than the York Street Hall of Fame, our ongoing financial burden supporting the K-Rock Centre does not leave a great deal of support nor funds left in the community well.  Aside from the option of bulldozing the current IHHOF and contributing $400K worth of taxpayer funds towards the $1.2 million dollar downtown relocation, other options being presented to Council include:

It would certainly be a devastating day for many Kingstonians and fans of the frozen game if the local IHHOF had to close its doors, and sell its cherished possessions to the highest bidder.  Even so, I can’t in good conscience argue that taxpayer funds should support this. Hopefully the K-Rock Centre’s financial shortcomings will be on the mind of enough councillors, and the City can pledge support in other, less costly ways.  I think a great majority of us are in favour of relocating the IHHOF to a tourist-friendly location, however we don’t have the appetite to chip in.  Rather than take funding away for much needed infrastructure, social and cultural projects, this project could be accomplished with private fundraising and corporate sponsorship.

What are your thoughts on the City providing $400K to move the IHHOF down to the Smith Robinson Building? How would you prefer to see this problem resolved?  Please drop off your comments below.