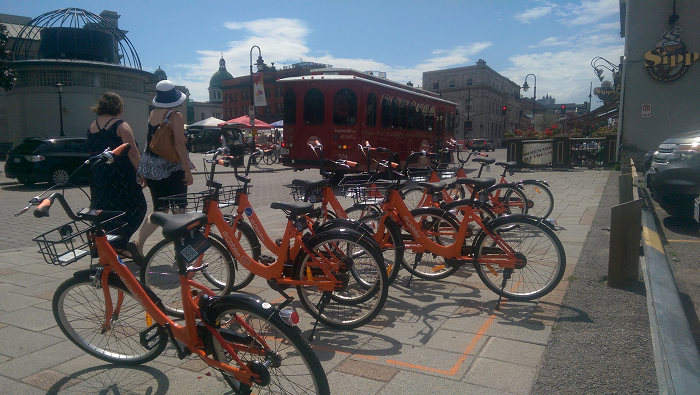 You may have noticed an influx of orange bicycles around downtown Kingston and on Queen’s campus. Dropbike, a new Toronto-based bike sharing service is running a summer-long project in Kingston. The pilot project began on July 1st and will continue throughout the summer, providing 100 dockless bicycles for rent in the downtown area. During the trial run, the first 10 rides are free, followed by a $1 an hour fee. “Dockless” refers to the fact that this particular bike sharing system doesn’t require expensive and intrusive changes to infrastructure such as large racking systems on our sidewalks. Instead, the bikes have an on-board locking system that allows the bikes to be left at any virtual “Haven”, and are locked via a smart phone app.

In order to make use of Dropbike, you do need to have 1) a credit card; 2) a cell phone; 3) a data plan. With the city’s free wireless only available in certain areas, Dropbike is only accessible to those who carry a smartphone with data (that counts me out). While we’re happy to see a Canadian company getting the first stab at providing bike sharing in ygk (something we have been advocating for for years), it’s unfortunate that this system isn’t fully accessible. Other bike sharing companies such as Vélo’v in France; Gr:d Bike Share in Arizona; VeloGo in Ottawa, (and a ton of others), have systems that allow users to purchase a PIN number online; purchase memberships of varying lengths; or pay as you go using kiosks located at each docking station. While it does require adding said kiosks around the city, offering this option in addition to using a smartphone app would certainly make using Dropbike easier and more accessible for many Kingstonians.

That being said, it is a pilot project so this is a great opportunity to try it out and perhaps encourage the company and The City of Kingston to consider additional ways to make it easy for us to ride around ygk. Considering the possibilities such as easy access to cheap bikes and the potential for the project to grow geographically, we want to know:

We’re really excited to see The City of Kingston trying out such a great initiative. Bike sharing has been around for decades and, while we work to improve cycling infrastructure in Kingston, it’s helpful to offer more opportunities for people to ride. Feedback from those who take advantage could certainly help with making future changes to city bike lanes. The accessibility issue is one that should be addressed and Dropbike has acknowledged that this is something they need to work on. Tell us what you think about Dropbike or bike sharing in general. Will you make use of this over the next two months? Tell us why or why not in the comments below.

2 thoughts on “Bike Sharing in Kingston”