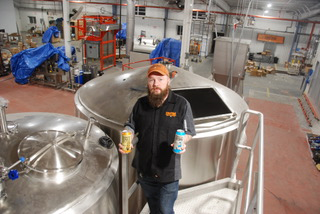 If you’re a craft beer fan, you couldn’t avoid the rumours on social media last year that a big player on the scene just might be relocating to Kingston. When it was confirmed that Spearhead Brewing Company was in fact doing just that, local suds lovers were delighted by the news. Spearhead is not only proud to represent Kingston as its homebase, but they are pleased to help out the community too. I sat down with Josh Hayter, President & CEO of Spearhead just before Christmas to talk about their relocation, their love for their new town, and of course, beer.

1. Why did Spearhead decide to relocate to Kingston?

For years, we’ve been a contract brewery, and then we started looking for a home. We looked in TO first, didn’t find anything that we liked. So we expanded our search further, and then we ended up talking to Richard from Pure Ingenuity. We always had him pegged to build our stuff. He was a partner and shareholder; he owns this building that happened to be coming up for vacancy. So it was kind of the perfect storm. Plus we love Kingston! For the size of the city, it’s got a huge culinary scene, it’s got three schools, it’s got the military base, but it’s a great place to live. We were really welcomed with open arms; people were like, “Yeah, yeah, come to Kingston.”

2. How did Spearhead go from contract brewing to being its own brewery?

There were two guys who were around from the get-go: Martin, who’s still around, and Dmitri, our former president. They got together, they had an idea; Dmitri had done some homebrewing and had some recipes nailed down. To really make it work, they needed a head brewer. There are very few homebrewers who can graduate to real brewing and do it. Geordan [Saunders] of Napanee is a great example of the right way to do it. That guy’s awesome. But for every Geordan, we have a thousand people who can’t do it. So they went and talked with Tom Schmidt, who is our brewmaster…he’s from the Czech Republic and he is a great guy, but he has brewed more beer than almost anybody I’ve ever met. He worked for Labatt for over 30 years; he worked in their international division, and if they acquired a brewery and it wasn’t doing well, they’d send him over and he’d get them back on the ball. He’s been all over the country and the world. So he was retired, sitting back and sipping beer by the pool and it was just one of those moments. “Just when I thought I was out!” We give him the creative licence. So he was an integral part, he nailed down the recipes, started brewing, and the company took off like a shot out of the gate.

3. Spearhead has gotten very involved with local causes since coming here. Would you elaborate a bit more about that?

We’ve been working with KEDCO, Tourism Kingston, and also working with the food bank. We’ve also aligned ourselves very closely with Hospice Kingston. It’s a great cause and they’re expanding as well as expanding their services, so that they can do more activities with people in the hospice. They’re expanding their facility to house people because it’s a growing need. So we sponsored them for their Hospice Fest and I’m actually working on the committee to plan the next one. We’re gonna make it bigger, and bring more money in for them. There’s a great team being assembled with brewers, restaurants, and representatives from the city, fire, police, and paramedics. Everybody’s getting involved. We’ve done every event we’ve been made aware of. Some of them we couldn’t because they happened two days before and we can’t staff that {on short notice}. With our brewery tours—and we’ll be doing lots of tours—we’ll be charging five bucks plus a flight, and it’ll actually be cheaper than if you just came in and bought a flight (so you might wanna take lots tours), but the amount from every tour is going to Hospice Kingston, and there will be also be a donation jar if you want to give more. How much that will generate for them, I don’t know yet because we’re not open yet. Hopefully it’s a good chunk of money for them.

4. Aside from your core beers, give us a sneak peek at what will be on the taps when you open? Will there be more one-offs and local guest taps?

We are constantly making new beers. Constantly. Well, our distribution is wide enough, that if we make a 30 barrel one batch, we can sell it before it’s even out of the bright tank. Lots of bars want those one-offs. We’ll also be launching a lager for Kingston, but we can’t give a name for it yet because it’s a secret! That will be the first beer to launch out of Kingston; that will be a core brand. We’ll have other beers out of our taproom, but that’s going to be a big one. We’re going to have six or eight taps. We’re gonna fill them up with our one-offs, our core brands will be on tap at all times, and we’re definitely going to have at least one guest tap. We’ll be rotating breweries, but rotating cider and things like that. We’ll have some fun with it. We’re also going to offer tap space to anyone who is contract brewing with us; that’s another thing a lot of breweries won’t do. But we’re willing to do that because we want them to grow, so we’ll have tap space for guys like that. We’re gonna do some cold coffee, too. [laughs] We’re working with a local coffee provider to make that happen.

5. What are some of the future goals for Kingston in terms of your brewery as well as your fellow brewers?

The first that we did when we made the decision to come to Kingston was pick up to call all the other brewers. We’re not coming here to step on anybody’s toes; we’re coming to grow and help grow the region. If you look: there’s Toronto, Ottawa, Vancouver, there’s all these cities that have a lot of good breweries in them, but no one’s built up that city to be like Portland, where you can get really great craft beer in the Waffle Hut. Everybody’s got good craft beer on tap. And we love to help make Kingston Canada’s first craft beer capital. It was the first capital in the country and it could be the first craft beer capital. We wanna make it that. And we want to work with everybody in town to make it that. We’re not saying “hey we know everything”; we’re saying “hey you make beer and I make beer so let’s join together to make this community a lot better.”

6. You’ve been doing this for a long time. Have you ever had a moment when you’ve thought: “That’s it. I’m done”?

I have never gotten up one day since I started doing this and thought, “Awesome! Now I have to go to work!” It’s every day that’s what I think. We make beer, we have fun with it but take it seriously because it’s a business. Where else do you get to sit and chat with somebody while you have a beer as part of your job?
———————-
As of this writing, Spearhead’s taproom and retail space are expected to open on 23 February 2018. Check their website and social media feeds for any updates! There are also plans to work with the city and have a West End farmer’s market on site in future as well.