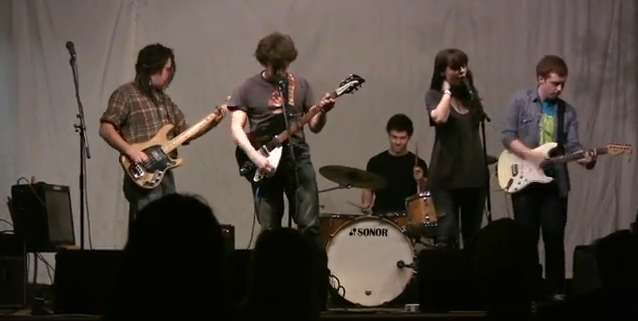 Sleuth Bears, a local, new-millenium grunge band is launching their début CD tonight at the Mansion, Parochial Youth. Meeting with vocalist/guitarist Neven Lockhead at The Brew Pub last night, I enjoyed a conversation riddled with artistic puns, music, and pop culture. This band is led by true artists, some Queen’s students in English, Philosophy, and Politics. Lockhead described the band’s style as “marginal notes to a manuscript”. If that’s not postmodern enough for you art junkies, then perhaps you should attend for $5 tonight at the Mansion and hear the new lyrics.

1. “Sleuth“, “Parochial“, those aren’t colloquial: are you Nirvana with arts degrees?

Haha. More like stuck in Arts Degrees without Nirvana, though I speak only for myself. Ken and Gary are pretty serious students. The rest of us might be more inclined to catch a cool show at The Artel rather than read up on Gothic Architecture, as much as I am a fan of the pointed arches.

2. I know you’ve worked with locals like Cousins, Rae Spoon, Hooded Fang: what other acts inspired you?

We went through a time of trying to sound more like False Face, another Kingston band. On top of being really nice guys, I think they really inspired us in an important way. From listening to their music and going to their shows, they taught us how powerful it can be to sound more abrasive as a band, and not being afraid to really let loose and crank it up. There’s something about the air at False Face shows, about how it is being pushed back into ever corner of the room by the sound. We try to approach that kind of intensity and thickness sometimes.

I think we also take some from Talking Heads, they have the kind of attitude we want.

3. You used to work at the CFRC. Could you describe your experience there?

I was so fortunate to be given the job as Music Programming Manager at CFRC in my 2nd year at Queen’s. It felt like I was learning a lesson every 10 minutes at that job. It exposed me to such great music, demystified the music industry and let me get behind the scenes of a community that I grew up in. But what it did the most for me, and for us as a band, was surround us with a group of supportive and passionate people who, like us, really want to make cool things happen here in town.

4. Kingston’s great as a vinyl source and I was wondering if anyone in Sleuth Bears is particularly attached to their player for inspiration, or do you find better music at concerts perhaps?

I’m not as big of a waxodermist as some of my friends. I buy records mostly at shows. I love leaving a concert with something in hand, and being able to revisit it later. There is something about having something as physical as a record that is unable to be matched by anything else. I really want to be on vinyl at some point before I’m 25.

5. Could you describe to me how tomorrow evening will play out, like, which age group do you expect in the audience?

Tomorrow night will probably be the happiest show for the band. Each of us are extremely proud of this release. The kind of support we get from the Kingston scene is so wonderful. But I think any sentimental notions we might get at the show will be hidden behind the energetic grunge heat we try to bring on a regular basis.

6. What do you have to say on the modern process of publicity or making a name for yourselves?