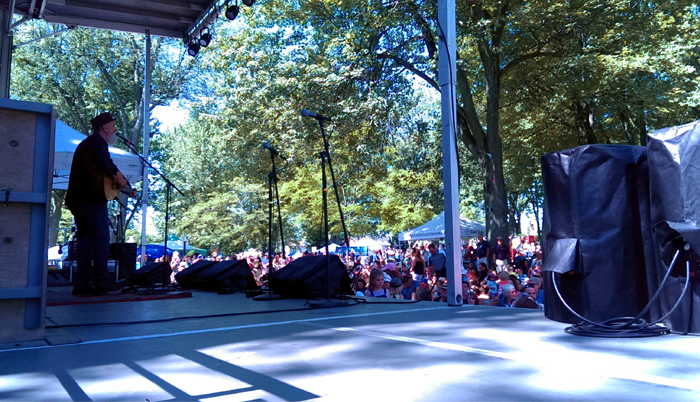 The 2017 Skeleton Park Arts Festival is behind us and, two days later, we’re still basking in the glow that this free annual summer fest brings with it. Five days of arts programming began last Wednesday evening with an opening reception at Elm Cafe for Métis artist Onagottay, followed by a screening of Indigenous digital stories at Legion Branch #560. The good times continued on Thursday with Live Music Aqua Fitness at Artillery Park accompanied by Spencer Evans, and Friday featured a screening of Jay Middaugh’s “LIVE in Kingston” at Next Church. The weekend brought us two full days of musical and theatrical programming including Fred Penner, Orange Alabaster Mushroom, Forty Seven Teeth, Justin Rutledge, Yuka, The Minotaurs, Sarah Harmer, The Barefoot Players, The Métis Fiddle Quartet, Old Man Luedecke and so much more. The brand new Hillside Poetry Stage featured readings by local poets with performances by Jenny Whiteley and Nathan Lawr. As always, the Porch Jazz Parade was a highlight of the weekend with performances by Swamp Ward Orchestra, Son Latino, Kitchen Gypsies and Chris Alfano, all accompanied by the incredible puppets of Birdbone Theatre and lead by Spencer Evans and his Goat Steppers Parade Band. Another successful festival has us all excited to see what next year will bring! In the meantime, enjoy some of our photos from this unforgettable celebration.