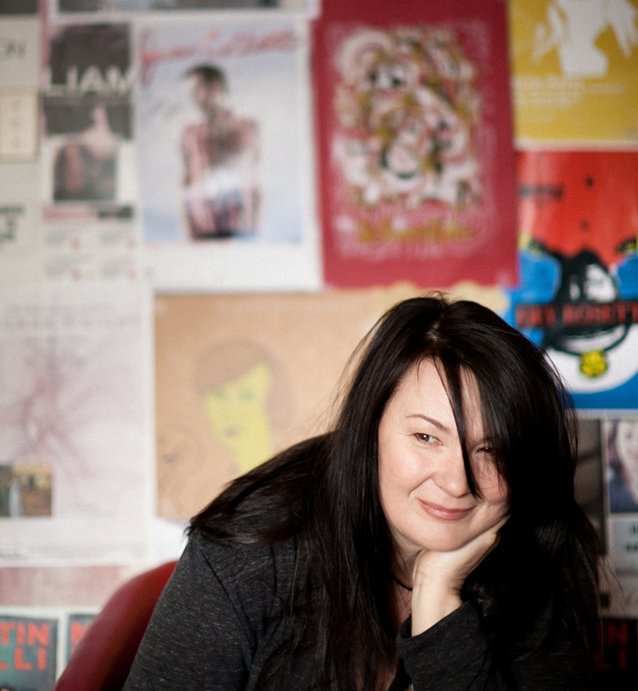 Virginia Clark grew up in Battersea and moved to Kingston to complete a degree in Sociology at Queen’s. After some time on the west coast, she moved back to the east and took up residence on Wolfe Island.  She eventually landed a job managing The Grad Club, and are we ever lucky she did.

Since she took over the club eleven years ago, the music scene in Kingston has grown and flourished to become the envy of other small cities in Ontario. Virginia established Flying V Productions and is now the top concert promoter in Kingston. The shows she brings in are comparable to any big city and tend to sell out quickly. Thanks to Virginia’s hard work, The Grad Club, known by musicians and music lovers all over Canada as a favourite venue for live music, has a reputation for hosting top notch bands in a quaint, welcoming atmosphere. Virginia’s success in coaxing this incredible talent to Kingston has resulted in sold out show after sold out show, requiring her to make the move to larger venues at times such as Sydenham Street United Church, The Alehouse and even the KRock Centre.

In addition to this work, Virginia is also the Artistic Director of the Wolfe Island Music Festival that will take place next weekend.

1. How did you first get interested in music promotions? When and how did Flying V Productions come to be?
I actually became involved with music promotions by accident. I answered a call from an music agent who got me to book one of his bands and soon after that the calls started flooding in for me to book bands.

Flying V Productions started when I realized I should put a label on all of the concerts that I have been promoting because nobody knew who was putting them on. Jill Barber came up with the name in about 5 minutes and also sent me a cute guitar logo with a flying v guitar.

2. You’ve brought in some incredibly popular and awesome bands at venues ranging from The Grad Club to local churches to the KRock Centre. Do you have a proudest moment? Is there a show you could label as your favourite? Why?

Proudest moment (scratching my head) I have weird obscure proud moments. One moment was during the Wolfe Island Music Festival when I saw a toddler dancing away to Holy Fuck. I was proud that I helped expose awesome music to such wee kids. Other proud moments are almost every year after pulling off a successful festival and not knowing if I could ever make the next year any better – than that year – because it was just that damn good.

Oh man, favourite show! I have waaaay too many favourite shows: Joel Plaskett at the Grad Club, Handsome Furs and Magic Jordan at the General Wolfe, Holy Fuck and Wolf Parade at the Wolfe Island Music Festival, Sarah Harmer in a barn at a winery, Plants and Animals playing for my birthday at the Grad Club last year, Diamond Rings and PS I Love You at The Wolfe Island Music Festival, Modest Mouse at the Alehouse, my first show with Jill Barber at The Grad Club, Stars at Sydenham Street United Church, Broken Social Scene and Feist doing open mic at The Grad Club, Neko Case getting up and playing with The Sadies at The Grad Club, a private show on my farmhouse porch with The Weakerthans and Bahamas playing Neil Young covers. Honestly I could go on forever!!!

3. How do you go about getting the bigger acts? Is there a band that you’ve been pining for that has been a challenge to bring to Kingston?

I often collaborate with Toronto promoters with the much larger acts, but also bring them to Kingston by begging and pleading. I tried really, really hard to get Wilco to come to Kingston last year and it almost happened. I guess I should have begged a lot more than I did.

4. What do you see as the music promoter’s role? Do you think anyone can do it? How has social media affected or changed the way you do business?

As a music promoter I feel like a bit of a curator and only do shows that I consider to be of a certain quality. Social media is good and instant but can also turn into spam, so I try not to oversaturate the audiences with too much unnecessary news. I do love Twitter though! It can be a blast and very informative.

5. Tell us a bit about the Wolfe Island Music Festival. When did you get involved and how?

Wolfe Island Music Festival started with friends asking friends to play on a dock and it soon morphed into one of Canada’s most celebrated festivals. It takes place in the village of Marysville on Wolfe Island on Friday Aug 5th and 6th with Stars headlining this year along with other amazing acts like Buck 65, Plants and Animals, Great Lake Swimmers, Paul Langlois and more. I got involved around 8 years ago when bands actually needed to be formally booked, and now I am the Artistic Director.

6. Aside from WIMF, what exciting things are on the horizon?

Thanks and credit to Tim Forbes for the photo of Virginia.