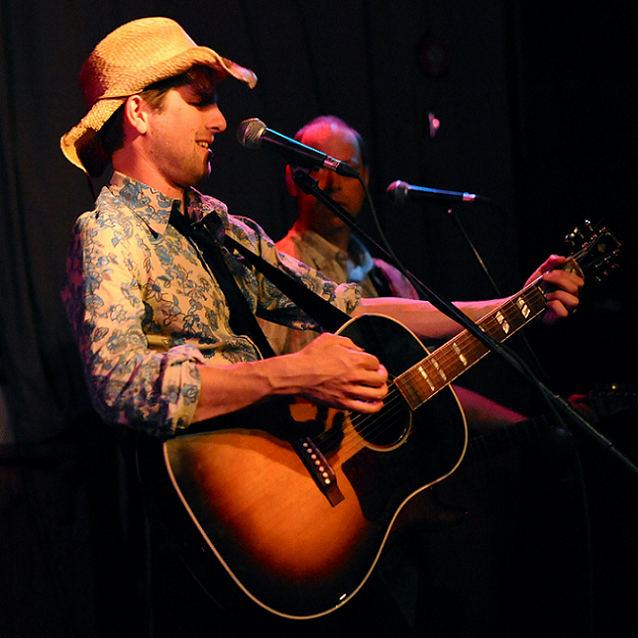 In our third episode of Six Questions, we sit down (via Email) with Reuben de Groot and one of his band members, ivory tickler, Josh Lyon.  Over the past few years, I’ve enjoyed many of Reuben’s live performances at both the Grad Club and the Mansion, while you might also remember him from a recent episode of Apple Crisp’s TV Desserts.  Lately, I’ve been anticipating Reuben’s upcoming album, Hey, which is being unveiled to the Limestone City this Saturday night, at the Mansion.  Two days before the big reveal, and the cross country tour that is to follow, Reuben and Josh take some time to talk about Hey, and look back on their music making experience to date.

1. The term wanderlust has been used to describe your adventures living in Vancouver, San Francisco, Edmonton, and now Kingston. How has the journey from city to city shaped your sound to date?
Reuben:  I think living in those cities has allowed me to make new friends in each new town, and its those people that have introduced me to new music, different influences and new players to make music with.  I think part of the reason I genre hop the way that I do is because of the way I’ve moved around.

2. Your music is often described as a kind of jazz, rock, country fusion, while influences span the Amazing Rhythm Aces to Steely Dan. Have you ever encountered any stereotypes as a result of being lumped in with these genres/artists?
Reuben:  I’ve never encountered any negative stereotypes.  People that are fans of those 70’s fusion acts are usually just amazed that they’re not alone – let alone to find out there is a band paying tribute to those bands that isn’t in their 60’s.
Josh:  On the flip side, it’s really hard to describe Rueben’s music to someone who isn’t a fan of those bands – I was only vaguely familiar with a lot of the bands Rueben loves before I met him.  I’ve told people that the music is sort of country/rock/jazz mix and they often seem to get a little squirmy.  At that point I have to add “except good” before I lose their interest!  The country fans love the music too, but I’ve also had people say to me after shows “it’s like country music for people who thought they couldn’t stand country!”

3. A couple of your songs received considerable acclaim by being used on television shows including Jpod, and Robson Arms. Did you tune in? What’s it like to have your music incorporated into tv shows?
Reuben:  I didn’t.  We were in the states when those songs were featured.  I saw the jpod episode online later, that was weird.  They chop the song to fit the story, but it worked.  It was the song “Things are Gonna get worse” and it comes on right after a big breakup scene.
Josh:  The nice thing about that song is that it can be used in almost any context… It’s always amusing to tie it in to a current event – it’s a catchall statement really, it can apply to almost any place or time.  People relate.

4. Since the release of your last EP, Winter of our Discotheque, you became a dad. How have your responsibilities as a parent impacted your commitment to the band? Has fatherhood influenced your song writing?
Reuben:  Fatherhood hasn’t really affected my songwriting too much.  I don’t write directly from experiences I have so I’m not good a penning songs for Lowell or about him.  The arc of the songs I write is pretty long for the most part, so I come up with an idea, flesh it out a bit, and it might only get finished a year or two later.   So being a father might only impact my finished material in a year or two.  The commitment to band has always been affected by fatherhood, seeing as all but one of the guys that have been playing with me for the last two years are fathers.  We try to make it work as best we can, well, our wives and girlfriends try to make it work for us is more like it.
Josh:  I’ve had incredible support from my family – I think we all have from our families – to pursue music and do the thing that we love… I even suspect my parents have started checking Rueben’s MySpace as they’ve started calling my wife to offer childcare whenever I’m out of town for a gig, which I generally don’t remember to tell them about!  And, like Rueben said, it’s nice to have multiple dads in the band… everybody is very understanding about family priorities and yet still flexible enough to tour from time to time!

5. Lately you’ve been hard at work putting the finishing touches on Hey you new album. Are there any funny/memorable stories associated with the creation of this album that you’d be willing to share?
Reuben:  Its been a long haul. I almost forget the beginning of the process – we started before Lowell was even born so all of that takes the place as the memorable event of the year.  It was great to work with Luther out in Adolphustown.  There were a few scary drives back into Kingston with the snow blowing and the lake waiting to swallow the truck.   I’m kind of glad that nothing too funny or memorable happened cause that usually means you deleted the hard drive but it turned out all right or someone’s car broke down but you got the neighbour to record his part for him – but none of that happened.  I made the album I wanted to make.
Josh:  It has been a long haul…but it’s so rewarding to have the whole thing done now.  And the tunes sound great.  The contributions of awesome players and vocalists from all over the place, plus the amazing talent of musicians in Kingston all come together to make something really wonderful.  It’s been a huge collaborative effort with help from all over the place.  For me one of the highlights of this record was getting to arrange the horn section for Baby Wake Up, which I originally composed using cheesy MIDI horns and then got to hand off to some of Kingston’s best horn players (Sylvain Gagnon – Trombone/Trumpet, Spencer Evans – Clarinet, and Bunny Stewart – many Saxophones) to improvise on my arrangements and really bring them to life.  Such a treat… and it sounds so good!

6. You’re coming up on a busy couple of months where you’ll be touring to promote your latest creation. How does the reception from your fans in Kingston compare to what you’ve encountered in other cities?
Reuben:  After living in a few different cities in Canada, I kind of have a few hometowns that I get to have a good warm reception in.  I’ll be doing a few shows in Vancouver next week, which is always a good place to come home too.  Old friends and band mates.
Josh:  It’s nice to play for a Kingston crowd – you know you can always call someone up to jam or sing along.  I originally met Rueben at the Grad Club open mic so it all started with just getting up to jam together there.  A lot of the folks who used to go out the open mic come out to see the band and jump up on stage for songs they know… It’s a very different feel from some of the other shows we’ve played.  The Toronto crowd seems to take us very seriously based on the shows we’ve gotten to play there and some of the folks we’ve gotten to play with, whereas Kingston always feels more comfortable and friendly – especially with a regular Thursday night at The Mansion.