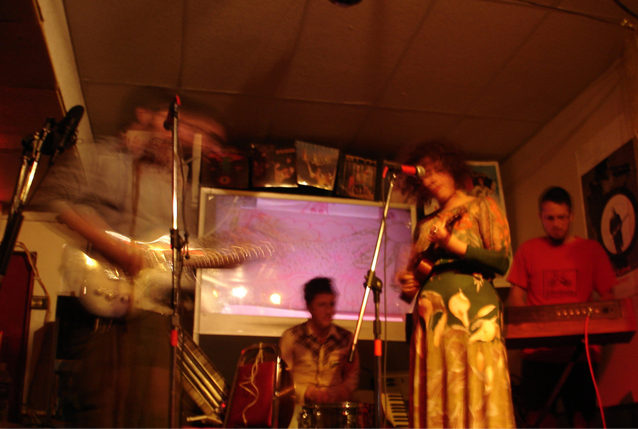 If you’ve taken the time to read about Kingstonist, you’ll know that we strive to cover a wide range of topics from a variety of perspectives.  We are always looking for new contributors, as well as better ways to provide useful and unique content.  In order to help us get there, I’m pleased to announce a new series titled Six Questions, which will feature interesting and entertaining interviews with an assortment of personalities with a connection to Kingston.

In this inaugural edition, Simon Borer (guitar, vocals) and Ruhee Dewji (flute, sax, vocals) of Entire Cities take the time to answer Six Questions.  This Toronto-based ensemble is no stranger to the Limestone City, as they perform here regularly, and will be playing at The Mansion tomorrow night alongside Reuben de Groot, Bruce Peninsula, and Share.  Regular readers may also recognize the band’s name as we’ve featured their music video for The Woods, as well as an episode of TV Desserts with Simon Borer.  Before we get started, special thanks to Quiet.Fyre for the photo of Entire Cities rockin’ out.  Enjoy, and hope to see you at the show.

1. Entire Cities is a 6-person (or more) band, while it’s members have diverse and overlapping backgrounds, as well as interests. What attracted you to join forces? Has it been challenging to manage all of your schedules, personalities and sounds?

Simon: Membership in Entire Cities has a long and tangled history: initially Josh and I made some demos and handed them out to everybody we met, inviting them to come play whenever they felt like it. Over the years it evolved to resemble a band. While we still like having people randomly jump on stage with us, we’ve got a core of super-committed people. Everybody’s styles and tastes are different, but at the end of the day, we’re all just music nerds. Another thing we have in common is that we’re all pretty good at working by consensus. I don’t think that anybody who wasn’t excited about working with people who were different than them would last very long in the band.

Ruhee: Managing all of our schedules is practically a full-time job in itself. I’m still amazed that we manage to make it work as often as we do. I think the most significant trait of Entire Cities is that we’re adaptable — not just in terms of schedules, but musically too. We have a really wide range of musical taste, but we manage to pick and choose bits of things that we all like and throw them together. That’s probably why we have so much trouble describing what we sound like, too — “If you take this part of this song and that part of this band …”

2. Your music has been described as beyond infectious, thanks to delightfully simple hooks, meticulous choral and instrumental arrangements as well as lyrics that perfectly weave poetry and prose. If you had to explain Entire Cities’ sound to a stranger, how would you do it?

Simon: This is something I’m lousy at. I usually just tell people it’s weird county-rock with too many instruments.

Ruhee: The worst part about describing our music is that whenever we tell someone it’s “country-rock” or “folk-country-rock” they invariably think of something that doesn’t sound like us at all. Sometimes I just say we’re a rock & roll barn dance and that seems to get the point across all right.

3. Entire Cities has received high marks from the likes of Chart Attack, and you’ve collected positive vibes from reviewers and audiences alike. What’s the most flattering thing, the highest regarded compliment or most significant honour you’ve received thanks to your music?

Simon: Definitely when we were asked to play a wedding by a couple of complete strangers. It was super-fancy, in this hotel in Ottawa. Before we started playing, I thought it was a terrible idea, but it turned out to be just the loveliest thing in the world. There’s nothing better than seeing a ten-year old in a tuxedo dancing with an old lady to a song you wrote.

Ruhee: I got hugged four times by a really excited drunk guy in Hamilton once.

4. While you write the lyrics and come up with the basic melodies, I’ve read that further song refinement is a collaborative process involving all of the members of Entire Cities. This team-based approach to creativity much lend itself to some pretty interesting and humorous stories. Do you mind sharing the details of your most memorable song writing experience?

Simon: There’s a song that we play when the power goes out (which seems to happen to us a lot) called ‘The Octopus Farm’. We were driving home from practice and everybody in the back seat started spontaneously singing, “the Octopus Farm, the Octopus Farm, we all shake hands on the Octopus Farm” for no discernible reason. I ran home and wrote some verses, and now it’s canon.

5. The band seems to frequent Kingston a fair bit, playing the Grad Club, Skeleton Park Music Festival as well as an impromptu performance on board a city bus. What’s your connection to Kingston? What keeps you coming back? How does our music scene compare?

Simon: Kingston has my favourite music scene ever, such an amazing pool of talent both for making music and for making it happen. Josh grew up there and moved back awhile ago, and we’ve been friends since we met at camp when we were about 13. Kingston has been kind of a second home for me ever since, and we just seem to click with the music scene there as well as we do, if not better than, with the stuff that goes on in Toronto.

6. You’re coming off of a busy year promoting your new album, which involved a hefty touring schedule. While October looks to be just as busy for Entire Cities, what are you looking forward to in the near future?

Simon: We’ve been recording our next record with Heather Kirby from Ohbijou, that’s the big thing. We’re working with a record label now, Easy Tiger, and they’re going to be reissuing Deep River on vinyl as well as putting out the new album. We’re looking forward to putting it out in the spring, and we’re working out a spring tour that looks really exciting.

One thought on “Six Questions for Entire Cities”