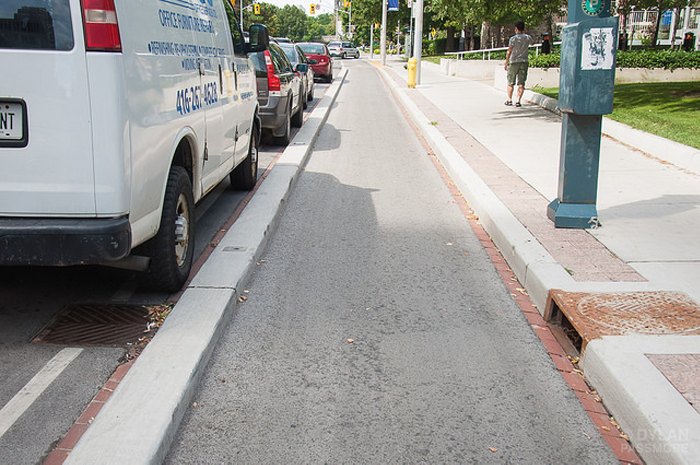 Kingston has made great strides in recent years when it comes to promoting active transportation and the development of cycling infrastructure. From Kingston Transit’s Rack & Roll program to the Commuter Challenge, and from the installation of an expansive network of bike lanes to faded and oft ignored sharrows, these enhancements were enough to warrant Bike-Friendly Community Bronze level recognition from the Share the Road Cycling Coalition. While cyclists will agree that we’ve come a long way in terms of making it easier and safer to ride in Kingston, as we strive to become a bike friendly city, many recognize that the work has just begun.

Last week, the City of Kingston announced a landmark investment in cycling infrastructure: the creation of the city’s first segregated bike lane.  A 1.7 kilometer stretch of Bath Road (between Collins Bay and Cloverdale) will receive a 1.5 meter-wide dedicated cycling lane on the north side, and a 3 meter-wide multi-use lane on the south side.  The project has received support from the Ontario government by way of $268,000 of funding via the Ontario Municipal Cycling Infrastructure Program.  With Kingston’s first segregated bike lane scheduled to come online by the end of Summer 2017, this week’s poll asks:

Do you support the installation of segregated bike lanes in Kingston?

The arrival of Kingston’s first segregated bike lane is a significant win for cyclists, however it’s also somewhat laughable when you consider the lane’s diminutive size and the fact that it’s relegated to one side of Bath Road. Optimistically, this development could be viewed as the foot in the door many of us have been waiting for, as it has the potential to stimulate more segregated lanes in other areas of Kingston.  And just why should we care about the prevalence of segregated lanes?  They are widely celebrated for their ability to reduce traffic congestion and cut injuries in half, both of which are key factors to stimulating and encouraging new cyclists to hit the road.

As Kingston eyes the next phase of the city’s bike lane network, serious consideration must be given to convert existing routes into segregated bike lanes, while extensions and new additions should be given the same treatment.  That sort of development is bound to generate criticism, as it will necessitate the elimination of on-street parking, the reduction of two-lane streets into single lane thoroughfares, and other inconveniences to motorists.   Even so, such sacrifices are warranted if Kingstonians are serious about lofty goals associated with active transportation, and bike friendliness.