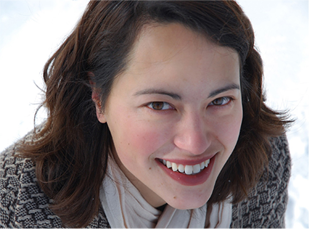 Sarah Yi-Mei Tsiang was launching her children’s book, Dogs Don’t Eat Jam, when I first met her, though I had interviewed her over the phone about a week prior. She was telling parents and children that the most important lessons in life were “how to burp and how to make the perfect snowball.” Yet, her verses voice the frustrating facets of motherhood, too, and it’s why I still think that Tsiang’s versatility and tone is best allegorized as the local landmark, Skeleton Park, which she wrote a poem about: a playground for children built above the graves of many unknowns. She’s that serious and yet playful, more controlled though than a Jekyll and Hyde act.

1. Do you feel that there are aspects of your writing that are shared between your poetry and children’s books?
I started by writing poetry and I feel like poetry and picture books are very similar. They both share a love of metaphors, a condensation of language, and are mainly image based. In short, they compliment each other very well. I was lucky enough to spend 6 years with my daughter reading children’s books, which is the most fun research ever. It’s really necessary to brace yourself in the genre if you want to write children’s books, they are so much more complex then people give them credit for.
I wasn’t much of a writer before the birth of my daughter — I really just dabbled, writing only when inspired. It took signing up for a course, deciding to invest money, to give me the boost to take it seriously. The experience provided me with the discipline to write, and experience in the craft.

2. As a Kingstonian, do you have any setting-based inspirations?
Having lived in Kingston for 5 years, all of my books are largely influenced by Kingston. There’s even an entire section in Sweet Devilry devoted to the street I live on. The section is called The Cataraqui Street Verses. My first picture book was partly inspired by the swing set next to the Woolen Mill, by the Cataraqui River. In addition, Jason Heroux, a brilliant local writer, inspired my newest picture book, slated to be out in 2012.

3. What can you tell us about local literary groups?
I’m the founder of the Villanelles and we write poetry, and some fiction. We meet at a member’s house, every two weeks, and it became so popular that we had to limit the group, so we aren’t taking any members for awhile. Next, Young Kingston is a group of children/YA authors which was started by local writer Ying Lee who’s also part of WritersFest. There, schools connect to find out about the several children’s writers in Kingston, and we get requests to run workshops. I love doing workshops because kids are always so open to new ideas.

4. For the sake of publicity, how much faith do you have in social networking?
Social networking has its place, though I find it can only go so far. A Facebook event page can be useful to let people know what’s going on, but it doesn’t really pull people. An organization like the WritersFest does the best job at using all the different venues for publicity. Using a variety of techniques to promote events is key — newspapers, posters, Facebook, Twitter, and targeted campaigns that directly engage your audience. It’s funny this should come up though, since my next book is actually entirely based on Facebook. For that I imagine a lot of my promotion will be more directly linked to social media.

5. How do you feel about writing on the Canadian identity?
I don’t set out to define the “Canadian Identity” in my writing. Instead I write about Kingston, about the community I know and love. Canadian identity is so diverse and individual that the only way for me to express it is through my own experience.

6. What recommendations for Canadian poets can you give?
Sue Goyette, has a new book called Outskirts which is absolutely fantastic. Susan Musgrave has a new book out, Origami Dove which is now up for the GG, and I’m hoping she’ll win. Julie Bruck (who is always fantastic) has a new book coming out in 2012 called Monkey Ranch, and I’m really looking forward to that. Sheri Benning is always fabulous and I can give a personal guarantee that anyone will love her books Earth After Rain and Thin Moon Psalm because they’re just that good. Helen Humphrey is an incredible poet and her work is ridiculously beautiful. Bronwen Wallace is one of my all time loves — her book Common Magic is just exceptional. It gives me shivers every time I read it (and I re-read it often).

Any closing statements?
I’m currently partnering with Oolichan Books to put together an anthology called Desperately Seeking Susan Poems, because we really believe everyone should increase their Sue-based reading. It’s crazy how good this anthology is going to be — you wouldn’t believe the fantastic Sues we’re lucky enough to have in Canada.