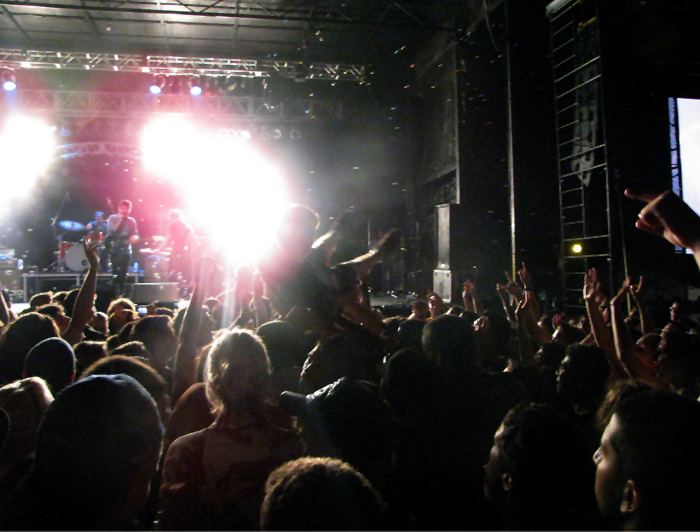 Kingston’s Market Square was bursting at the seams with music lovers thanks to a free, live performance by the Arkells last Friday night. This second of two Rockin the Square engagements proved to be even more popular than the season’s inaugural concert back in June, which had a definitive local flavor featuring Sarah Harmer and opener Rueben deGroot.  The turnout was undeniably massive, making hugely popular events such as Movies in the Square, Buskers Rendezvous and the Limestone City Blues Festival pale in comparison of crowd size and energy.  Eager attendees were packed in tight, as close to the stage as the barriers allowed, while choice seating in the temporary bleachers was snapped up quickly by those who arrived early to gain the best vantage point of the show.

While I’m admittedly not the hugest Arkells fan, they put on one heck of show, which could be heard many blocks away from Market Square; not a noise complaint.  And as I’ve witnessed after many a show at the K-Rock Centre, as this summer’s last Rockin the Square concert concluded, the throngs of attendees flooded the streets making their way into local restaurants and watering holes for post-show refreshments.  All in all, Rockin the Square proved to be a resounding success.  The series delivered top quality entertainment where the price of admission was not a obstacle, and it resulted in a flood of respectful concert-goers who subsequently supported local businesses.  With the K-Rock Centre somewhat lacking in terms of summer programming, it’s fantastic to see the City of Kingston and The Drive generously stepping up to fill in the void of big name performers coming to town. Looking back on this year’s series:

What was your favorite aspect of Rockin the Square?

I for one would love to see Rockin the Square double their number of shows next summer, and if there’s an appetite for that sort of thing, take hold of every weekend there isn’t a major festival or event making use of market square. Assuming the series will continue next summer, who would you like to see rock the square in 2015?  Should the city make this event a part of the regular summer routine for Kingstonians and tourists?