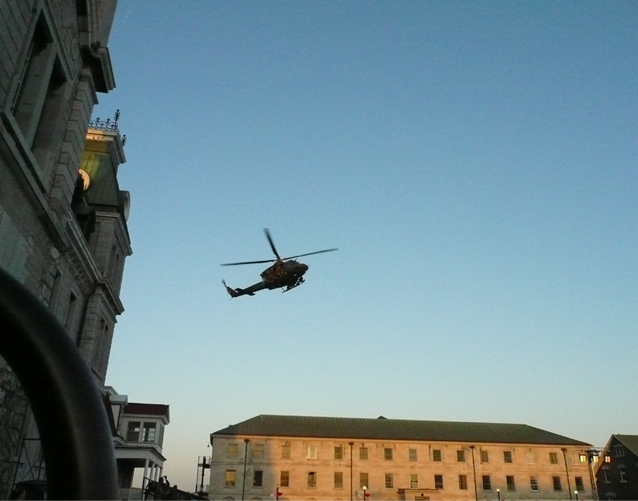 On Thursday evening, we made our way across the LaSalle Causeway and onto the peninsula, which the Royal Military College of Canada has called home since 1876. With Convocation behind them, RMC was buzzing with excitement as Cadets and spectators anticipated the spectacular Sunset Ceremony. In case you are unfamiliar with this annual event, it’s essentially a chance for the Cadets of RMC to showcase military skills including drill and rappelling, sports such as fencing and taekwondo, and finally, lots of fireworks. Although rain and gale force winds prevailed throughout the day, the skies cleared long enough to allow the Graduating Class of 2009 to have their sensational sendoff. Highlights included, the Sandhurst Team, who rappelled onto the Parade Square from a CH-146 Griffon helicopter, which appeared out of know where. We were also amazed by the precision drill team, who pulled off movement after movement simultaneously, and sometimes silently. Last but not least was the end of the world-esque fireworks display that was bigger and louder than most of the displays put on by the City over Confederation Basin. Be sure to check out our Flickr, and YouTube channel, which are loaded with tons of sights and sounds from RMC’s Sunset Ceremony. Our congrats to the Grads of 2009, and all those who made this event a huge success.