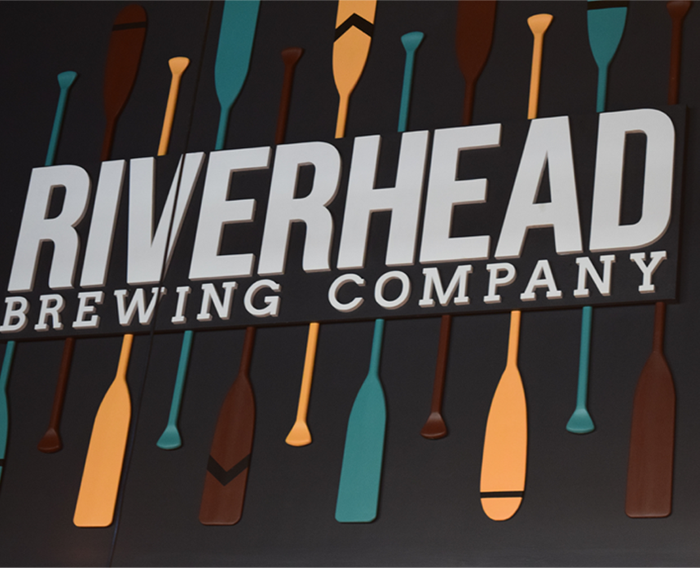 Ensconced between the 401 and where Princess Street meets the Cataraqui Centre, Riverhead Brewing Company is one of Kingston’s newest breweries. It’s a dream realized for owners Jeff Fasken and Richard Marzek, one where they are excited to be part of Ontario’s lauded craft beer scene. With Fasken’s business and marketing background and Marzek’s 20+ years of homebrewing, the end result is a pleasing addition to the city.

The brewery’s taproom has a decided canoe-and-paddle theme, with a beautiful functioning canoe as an eye-catching centerpiece tilted over the tables. They offer a small menu of paninis and soft pretzels to complement their four core beers. Kingstonist ventured out to the West End late this summer to chat with the owners about their business as well as sample some top-notch suds.

1. Given the explosion of the craft beer scene in the province, I still have to ask: what led you guys from homebrewing to opening a brewery?

Jeff: Well, we were looking around Kingston, and Richard said it was time, as he making tons of beer and giving it away! So we said, “You know what? Is there a market here in Kingston?”

J: So we started building a business case; we looked at the numbers, the popularity in the marketplace. When you look at the US and us being about five years behind in what’s happening, we said, “You know what, it’s time for Kingston to have another {brewery} and let’s put her in the West End.”

R: Especially in the West End. There’s nothing on this side.

J: We were talking with the King’s Town guys a few months before they opened, and they’re a great bunch of guys. We’re glad to be representing this end of town alongside them. You know what, we have a few solid breweries around town—Mackinnon Brothers, Stone City downtown—and we’re glad to be part of that family.

2. So Richard takes care of the brewing part along with Aaron Martin, the head brewer, and Jeff, you oversee the taproom. Richard, how does the passion from your homebrewing background carry over into the beer being made?

Jeff: (laughs) He’s a bit of a beer nerd, so he’s been studying beer for over 20+ years: water profiles, all the little tips and tricks.

Richard: So I’m in charge of back of the house, all the production area. We try to follow best practice on everything we do. Water treatment is very important. Every beer style has its own preferred mineral style because it would significantly affect the flavor. Especially IPAs, because if you’re not hardening the water, it tastes muddled; it’s not as crisp and clean. Making sure we use fresh ingredients, milling the grain seconds before we mash in, things like that, so…

J: You can see that when you take a tour. Everything’s pretty fresh.

R: The system we use here was built in Niagara Falls; we decided the company made a really good system and had a good reputation.

J: It’s a 15 barrel system. Right now we have four 15-barrel fermenters and two 30-barrel fermenters. We got enough room in the back to double that in the future. We piped in some extra glycol so we can expand—

R: (interrupting) The system is slightly oversized. We could make 2,000 liters at one time! What’s great about this is that in the planning process we were just going to start with 7 barrels and then it went to 10 barrel…it was only, like, 25% more to get 50% more capacity! So we went to a 15, yeah. We went as big as we possibly could within the budget!

3. Were you going for a certain aesthetic, given the name of the brewery?

Jeff: We picked Riverhead because Kingston is at the head of the St. Lawrence River, and it’s such an important water source to this area. We thought it sounded pretty nice and people could appreciate it wherever they’re going. The interior design was done by our tied-house supervisor, Nicole, and my wife Amanda did the logo, the menus, and all the graphic design work. She definitely brought it all alive and gave the spirit that it has today. It kinda makes it our own, right? It’s all family-built. There’s little things that you’ll come to find if you come here a few times and get to chat with us. The tabletops {he knocks on them} were built in Richard’s basement, he did all of those. The flight paddles you’re drinking on, those are all him too.

4. I see that you offer four core beers and the occasional seasonal. Is there any of your brews in particular that stand out with customers?

Richard: Getting into summer, the American wheat beer was a huge clear seller. The second I’d say would be the Tropical IPA?

Jeff: The Tropical IPA is definitely one of our biggest sellers—it’s nice and juicy. You can bring it out to the cottage or whatever!

R: Yeah, the IPA has lots of mango, apricot, a little bit of citrus in there…

R: There’s a little bit of pine in there too. It was dry-hopped with one of the experimental hops called Idaho Seven. So it’s a very tropical hop!

J: People are enjoying that. For folks that really know their beer, they’re more into the Irish Red or the Porter.

R: The reason I made the Irish Red was as a test batch, my brother said it was one of his favorite beers. I was like, “Oh, well then I have to make you one!”

J: The American wheat is going to be one of our special releases, but if it keeps going the way it’s going, people are gonna cry if you take it away! We may consider putting that on full rotation. For the fall, we’re thinking and experimenting about what we’re gonna put on tap. The thought is we will always have four or five that people can depend on, and then we’ll fill out the other five or six taps with seasonals. Try and surprise people. We hope people enjoy the beers we have, and look to bring new ones out so they can try something different.

5. I believe you guys are fifth brewery in Kingston, aside from Skeleton Park Brewery, which is contract. Have you been warmly received by the community thus far?

Jeff: We got people coming back already! Sometimes two or three times a week to pick up more beer! Most of the flights, you know people aren’t digging a beer when they take a sip and there’s some left behind. But most of the paddles are coming back, people are licking the glasses clean, using their fingers to get the last little bit at the bottom so I think we’ve got a good few beers to open with!

Richard: The reviews online have been very positive as well, lots of feedback about how our beers are really well made.

6. Wow! That’s terrific. I realize that the brewery has only been open a few months, but can we ask what is in store for the future of Riverhead?

Jeff: Well, we’re Kingston-proud, right? So we wanna get out beer out into the bars. The first few have called us up before we’ve really gone around and marketed anything. Our friends next door at the Red House, they’ve put our Irish Red on their taps. Downtown at the Kingston Brewing Company, they were the first ones to ask us for our beer. We had to handwrite them an invoice because we weren’t ready!

Richard: They insisted on having the first keg of the Tropical IPA.

J: The Alibi is planning to take all four and put them on tap, so the whole rotation is going on down there. We’re really happy to see the support from the local bars. We’d like to service Kingston really well, and then depending on how things go, maybe the LCBO. Maybe slowly expand out for other people to try.

R: We wanna be seen as a Kingston feature. And you have to hand it to Stone City, those guys make some excellent beer!

J: You can tell we love beer, and if we can make good beer, then that’s what it’s all about, right? If you make good beer, people will come back, and if you make crappy beer, you’ll only be open for a short time. It’s all about cluster marketing. If you have a group of strong breweries, people will hear about you and start beer journeys out to Kingston. They’ll help the local community and other businesses!
—————————
Riverhead Brewing Company is located at 631 Fortune Crescent, Unit 10; their phone number is (613) 384-2337. On September 16th, they’re holding their 1st Annual Oktoberfest with Celtic Kitchen Party playing live at the brewery from 1:00-2:30 pm. They will be debuting their Oktoberfest Lager as well as having traditional fare such as sausages and Bavarian pretzels. The fun begins at 11 am.