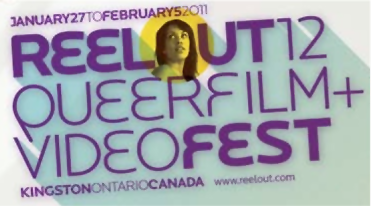 A funny thing happened to me just a few hours ago; I found a wallet.  In that wallet, I found the regular things: debit card, credit card, $215 in cash, ReelOut Queer Film + Video Festival Pass, condom.  You know, the regular stuff.

I would never suggest carrying a condom in your wallet.  In fact, I’m pretty sure many health care workers would caution against it.  I would, however, seriously suggest getting your ReelOut tickets right now!  In fact, I know they will be very safe inside your wallet.  Just don’t leave your wallet lying on the streets of Kingston.

This year’s rendition of ReelOut brings us many fabulous films from across the globe.  I’m particularly excited for the films from the Out in Africa Film Festival from South Africa and Kashish Mumbai International GLBT Film Festival from India (documentaries and shorts). These queer film groups have programmed the selections of films for we Kingstonians to experience.  That means you and I can experience a film that has been seen as influential, inspirational, and reflective of South Africa or India.  I think this is a great way to experience the great cultures of these two countries.  I especially don’t want to miss out on the Out of Africa double bill.  I’m always interested in experiencing the life of drag queens from around the world, and The Sisterhood should do just that!

I can’t forget to mention the fabulous soirees that will be abundant during the ReelOut Queer Film + Video Festival.  There will be something for everyone.  The main event will be the Opening Gala Epic Movie Masquerade, which will take place after the screening of A Frozen Flower. This event will be in conjunction with ArtIgnite and plans to entertain you.  There will be live entertainment featuring Miss Dixie Landers, Miss Ricky Raunch, and me, Miss Tyffanie Morgan, as well as DJ Haircut and delicious appetizers courtesy of The Renaissance and Pan Chancho Bakery.  This will take place at The Renaissance on 285 Queen Street.  Plus, don’t forget about the Wine(gums) & Cheezie Reception for LGBT YOUTH, the Saucy Saturday Spectacularrrrr, and the final soiree called the FEELOUT REELOUT WRAP PARTY which is a particular favourite of mine since I get to let my hair down and take off the heels for one night. 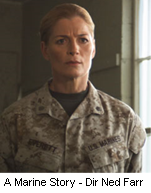 A mixture of short films, feature films, fun films, titillating films, and thought provoking films will welcome you this ReelOut festival season.  One particularly thought provoking and perhaps emotionally provoking film would be the A Marine Story on February 2nd.  It focuses on the life of a marine who knows first hand of the Don’t Ask, Don’t Tell policy in the United States.  There has been much talk about this policy in the news as of late, in particular it’s hopeful defeat.  A Marine Story should bring a personal perspective to the lives of those LGBT people who served their countries to be suddenly dishonourably discharged.  This screening will move you and me because I’m not missing it.  After the screening, there will be a facilitated discussion by Samantha King PhD (Queen’s University) featuring Scott Morgensen PhD (Queen’s University) and Patrizia Gentile PhD (Pauline Jewett Institute of Women’s and Gender Studies, Carleton University).

It is going to be one crazy 10 days of ReelOut.  I’ve made a little Google Map to help point to the many locations screenings and parties will take place.  Plus, there is a great map and schedule of films on the ReelOut website.  But if you get lost, just remember to click your heels three times.  It always worked in the movies.