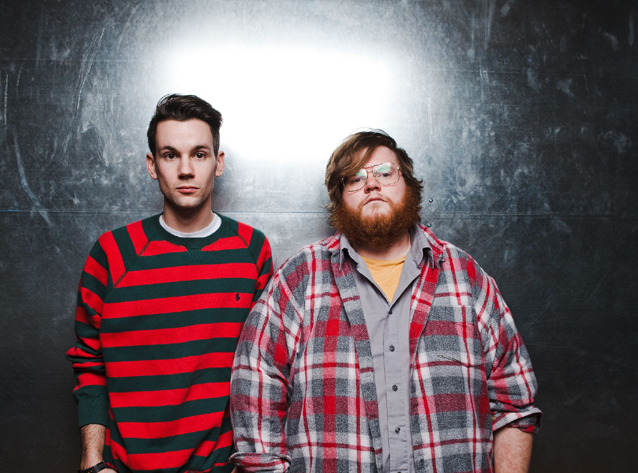 The last couple of years have provided for one wild ride for Kingston’s “distorto-indie rock duo” PS I Love You (Paul Saulnier and Benjamin Nelson). The band was catapulted from the relative obscurity of our local music landscape by their highly acclaimed 2011 release Meet Me At the Muster Station, which afforded them international tours, extensive media coverage and most importantly, heaps of new fans. Their recently released sophomore effort, Death Dreams, was recorded using their proven low budget formula by local producer Matt Rogalsky in their familiar warehouse-like recording space.  Unsurprisingly, the positive reviews are pouring in, while the guys are currently back on the road on a thirteen-city tour, which will conclude at our very own Grad Club on the 9th of June.  In between all the action, Paul took some time to sit down for our latest round of six questions.

1. Your debut album, Meet Me At the Muster Station, received many dazzling reviews, which led to international touring, festivals, as well as new fans and friends worldwide. What are your fondest memories of the wild ride PS I Love You has taken thus far?

Probably the biggest highlight for me was the first time we played to a full club in New York City. It felt amazing. Like we had really accomplished something. However, I quickly learned that you haven’t made it until you start filling clubs in cities like.. Akron, New Haven, and Boise. That’s the real challenge. Other highlights of the wild ride include.. seeing Stonehenge, playing to thousands of people in Spain, driving the pacific coast highway, and staying in a trailer in Marfa, Texas.

2. Since February 2011 you’ve performed for audiences at SXSW in Austin, TX, New York City, London, UK, Madrid, SP, Munich, GER, always landing back in Kingston.  While Kingston inspired your first album, what keeps you coming back?  What can you get here that you can’t get anywhere else?

That’s our community and we’re comfortable and usually happy there. Also we’re both pretty stubborn. Kingston is a weird city where most of its finest citizens aren’t from there and move to Toronto as soon as they can. I think I may even have more friends in Toronto who used to live in Kingston than I do in Kingston right now. If only they all stayed. Or if only I wasn’t so stubborn and lazy. Anyway, Kingston is really nice.

3.  It’s been said that your creative process, or at least for Meet Me At the Muster Station, involves Paul coming up with a guitar riff, then Benjamin adding a drumbeat. Simple as that.  Did your process change in any way for your new album? How much was your process and music influenced by your time on the road?

I wrote a lot of guitar riffs while watching tv in our hotel rooms. I like making up songs when my brain is kind of occupied by something else. I can get into this state where I’m channeling music form within me without having to think about it. Then I show what I come up with to Benjamin and we go from there. We record what we come up with and then I eventually write words and sing them. It’s kind of a slow process but it works for us.

4. Meet me at the Muster Station was named after the lifeboat assembly area at the front of the Wolfe Islanders III. What inspired the slightly more morbid name for your sophomore follow up: Death Dreams.  Are you sleeping better these days now that the album is complete?


I sleep okay I guess. It hasn’t really changed. I actually don’t sleep all that well. I do feel really good about completing and releasing the album though. The stress and pressure of creating music and releasing it to the world never really goes away. I keep pushing myself to write new songs and get better live.. it’s a cycle that sustains me. Basically, the stress keeps me going. I don’t do well when there’s no pressure… internal or external.

5.  Following the winning formula of Meet Me At the Muster Station, Death Dreams was also recorded in your tiny local rehearsal space with producer Matt Rogalsky.  Why did you decide to go this route to record your sophomore album?  Did you feel any pressure or ever consider going elsewhere to record?

Matt is great. He’s a good friend and he’s really good at what he does.. and he understands us sonically and as people. Going elsewhere seemed unnecessary. Plus I would rather record and rehearse in the same space instead of going to an expensive studio. I’m really happy with the sound Matt gets so why change a good thing?

6. As you well know, Kingston is home to many talented bands.  From your experience thus far, what advice, whether it be something you wish you’d known or just something useful you’ve learned along the way, would you give to musicians hoping to follow in your footsteps?

I think the thing I’ve learned about Kingston is to try not to get Kingston to love you. Focus on other cities and countries and Kingston will come around. This is kind of a good thing. Kingston is a nice comfortable place to live. A much more experienced Kingston musician, Luther Wright, gave me some great advice once: “Kingston keeps you humble”.