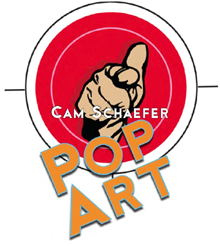 Walking into the new Pop Art series by Cam Schaefer at Studio 22, it’s easy to see where he draws his inspiration. The comic book lines of Roy Lichtenstein and the starkly banal subjects of Andy Warhol immediately come to mind. For instance, one of Schaefer’s most recurring images is a simple Holstein’s head. The cow is reproduced in varying colours, sizes, and media – but always with incongruous hilarity that flies in the face of Capital-A “Art.” This is Art that has fun.

Schaefer is a local artist and musician and has been working on his Pop Art series for about a year. Though his work hearkens back in many ways to the 1960s, Schaefer’s process is surprisingly technical and twenty-first century.

“I draw small images with brush and India ink,” explains Schaefer. “I take a photo of the completed image with my cell phone and email it to Hersh Jacob.” Jacob is the owner of Studio 22. Jacob then alters the image via computer, fiddling with texture and colour, before emailing the image back to Schaefer. “I reproduce by hand several iterations of the image,” Schaefer goes on. Jacob then makes glycee prints and sends other images off for silkscreen printing.

Sound complicated? The simplicity behind Schaefer’s graphic tulips and cows belies the inordinately technical process. Most of Schaefer’s work is a progression of recurring images with variations: red, yellow, blue; small, larger, largest. The seriality of his work is as much a comment on the convolutedness of production as on the retro commercialization of art. Or, perhaps more accurately, Art.

But Schaefer is certainly having fun while he’s at it. The pièce de resistance of his exhibit is the ubiquitous pointing finger. Available on buttons, on postcards, and on prints, the pointing finger of varying hues is everywhere in the collection. The endless fingers cheekily implicate us, the viewers. “I’m often a bad machine,” says Schaefer of his attempts to make his works of art as uniform and precise as possible. With Schaefer pointing so many fingers (quite literally) at us, I suppose I should consider my own uniformity, my deference to commercialism, my endless use of technology, my own – as it were – machinery.

Then again, maybe Schaefer is just giving us all the finger.

The Pop Art series runs at Studio 22 between August 17th and September 15th. For information about the artist and for gallery hours, visit Studio 22’s website.