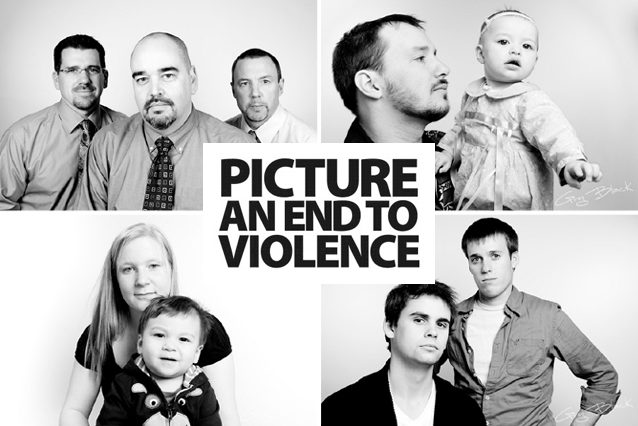 Going on three years now, a group of committed Kingston educators, students, activists, artists and concerned citizens have come together to help put an end to men’s violence against women.  Members of the group include representatives from Kingston Interval House, Sexual Assault Centre Kingston and students and staff from Queen’s as well as other members of the community.

Picture an End to Violence is a series of photographs taken by photographer, Greg Black, of men who support the endeavor to end violence against women.  Engaging men in the effort has been a very effective way to not only show survivors of violence the support of the men around them but also to spark conversation within the community.  In addition to this, the photographs are beautiful.  Past subjects have included Queen’s professors, artists in the community, public figures, children and some women as well.

This year’s set of photographs will be displayed during International Women’s Week (March 5th-13th).  The public is invited to a gallery event at Zappas Lounge on Tuesday, March 8th for the first unveiling and from there, the photographs will become part of a traveling exhibit, displayed at various events throughout the week.

“Images of real people make a powerful statement,” says Jamie Sifton, Acting Coordinator of the project.  “We want to challenge the common stereotype of male identity as being defined by aggression and dominance.”

So this is where you come in, guys.  Men are needed for this year’s photos.  Interested, self-identified men are asked to register for a twenty-minute photo session with Greg Black.  Greg will be set up to take your picture on January 20th at The Queen’s Centre (corner of Division and Earl) in room 505 from noon-8pm and again at The Artel (205 Sydenham St.) on January 21st from noon-8pm and the 22nd from 1pm-4pm.

So, come on men of the Kingstonist community!  I know you’re out there, please sign up and help keep this conversation going.  Be sure to keep an eye on our events calendar for concerts and various exhibits and workshops as International Women’s Week approaches.

Today’s photos are samples of Greg Black’s work from past PAETV exhibits.

5 thoughts on “Picture an End to Violence: Men Wanted”