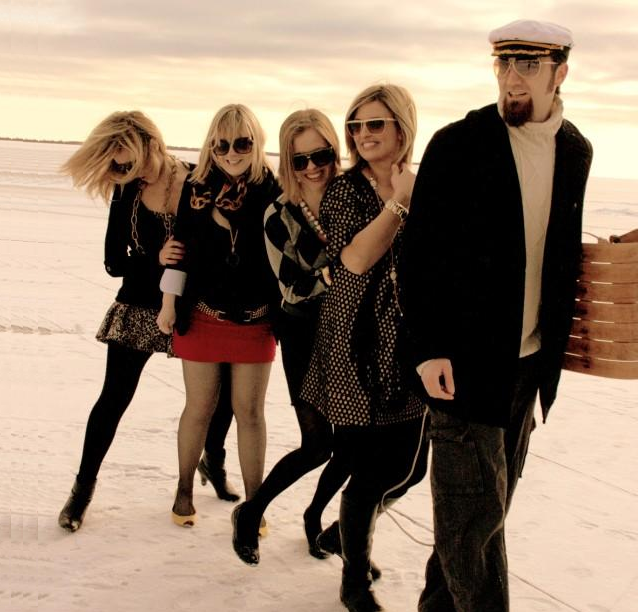 I first heard Pelt during half time at the opening bout of The Kingston Derby Girls two years ago. I had heard the name before but had yet to see this band, and to be honest, I was there to check out the roller derby, so the rockin’ show these talented folks put on was icing on the cake. I danced – hard, and so did a whole lot of other people of all ages and from all walks of life. It was a pretty energetic, epic experience and it fit in perfectly with the whole atmosphere of the roller derby. The band has been playing together since 2005 and upon winning Kingston’s bandslam, they found themselves being played on local radio stations as well as getting frequent airplay on Toronto’s 102.1 The Edge. They’ve played across Ontario and Quebec with noted bands such as Bedouin Soundclash, Tokyo Police Club, The Planet Smashers and Priestess, to name a few. Tonight these four ladies and one ladies’ man will be performing with Wildlife and Miesha & The Spanks at The Mansion.

1. You all work at different things other than playing with Pelt. Can you tell us what each of you does when you’re not on stage or in the studio? Do you see your time with Pelt as a separate entity from your personal life or do the two overlap?

MOIRA: I work as a piano teacher in the community, Genene (vocals) is a server at Tango Restaurant as well as sales clerk at Agent 99 and is also pursing part-time studies at Queen’s. Laura (drums) works as an Education Assistant with special needs kids. Pam (bass) is a clerk at Money Mart and Chris (aka THE BOY/guitar) is a cook at The Duke where he makes some pretty mean Mexican food!

As for the second part of the question, I’d say that PELT is my personal life. I think, I can speak for the rest in saying this as well. These folks are both my friends and my family. I love spending time with them at jams and also on stage.

2. Some say Pelt is a difficult band to categorize. When I first heard you I immediately thought of The B52’s but upon further listening, I can hear many influences in your music. The one common thread is the incredible energy that you bring to every tune. How would you describe your music to someone who has never heard you?

CHRIS: We usually describe our music as a “breed of dance-rock” somewhere between the 60s and the 80s. As for our stage-show, it’s just one big dance party.

PAM: We each bring something unique to the group. We’re hard to categorize which has been a blessing and a curse, especially when finding bands to share that stage with. Sometimes the most successful shows have been with the most diverse genres. We’ve played some awesome punk shows. The energy on stage wins the audience over.

3. I read that you feel Kingston is a great place for a band to start up because the scene is thriving but still fairly small compared to cities like Toronto or Montreal. Now that you’ve made a name for yourselves, you’re still here. What’s the draw of Kingston?

MOIRA: Kingston is a pretty place and for the size of the city we have some great cultural events that happen here. It’s a great place to start out with lots of venues to play and some really warm audiences. But we’re still close to Toronto and Montreal for concerts, so traveling isn’t a problem either. It’s still affordable to be an artist in Kingston. We don’t need to be so concerned with making rent and can still have time to write music in our off time or travel across the province on the weekends.

4. You’ve received radio play on 101.9 CFRC, 98.9 The Drive, 105.7 KRock and 102.1 The Edge in Toronto, just to name a few. What’s it like to hear your tunes on the radio? What’s the most flattering comment or opportunity you’ve received as a result of all the airplay?

MOIRA: Last time I heard our song ‘LOVE ROCKET’ on the radio, I was in a gas station. I screamed. The counter guy didn’t care, but the other customers were really excited too and we kinda bopped around together in the Esso store. It’s pretty thrilling to hear something you’ve done be put out there…

GENENE: I love it when younger or starting-out musicians come up to me after performances or hearing us and say, “How’d do you do that?” It’s so flattering . People from work will hear us on the radio and comment on it after, “That was you guys??”

5. Very often we see bands made up of a bunch of men with one woman. Pelt has turned the tables on this with “four ladies and one ladies’ man”. How does this dynamic affect your music or your show? Have you faced any challenges because of your configuration or does it open more doors?

LAURA: We have a boy in the band?

CHRIS: Pretty sure we’ve got the same challenges as any independent band. We’re just doing what we love with our friends.

6. You have two albums, Vacancy (EP 2005) which sold out completely, and 2010’s full length Static in the Attic. What’s next for Pelt? Is there a new album and/or tour on the horizon?

MOIRA: We’ve got some cool festivals coming up for the summer. In the mean time, we’re working on a B 52s tribute show and lots of new material. Woot.