After years of being underutilized and otherwise ignored, Douglas Fluhrer Park emerged in 2014 as an important gathering space and focal point for the local community. Excitement began to swell as a result of the On the Wall Street Art Festival, which brought a collection of local artists and community groups together to breathe new life into the iconic graffiti-clad retaining wall over the course of a weekend-long spectacle. While many of those pieces have since been cannibalized by spray cans, the remnants of the original compositions reminds us of the potential for Douglas Fluhrer Park moving forward. Of course, that future could ultimately be jeopardized by the contentious Wellington Street extension, which would reduce the park to a thin ribbon of sod holding back two or more lanes of busy roads from the gentile shores of the Cataraqui River. Moreover, the reversal of the decision to demolish the nearby historic broom factory and the rejected massive housing project just down the shoreline raise hope as well as renew concern regarding how this important slice of Kingston’s waterfront will emerge in the coming years.  Most recently, Douglas Fluhrer Park has been eyed as a potential site for the relocation of the historic 148 year-old grand trunk train station, which would be completely overhauled to provide high end retail and office space.

The park’s namesake, Douglas Fluhrer, worked as a planner with the City of Kingston for 36 years and during that time he is credited with establishing over 70 public parks; one of the highest ratios of urban park land in North America.  He passed away two weeks prior to the inaugural On the Wall Street Art Festival.  I’d like to think that he would have been pleased with the renewed interest and aesthetic of the park that was named in his honour.
—————————— 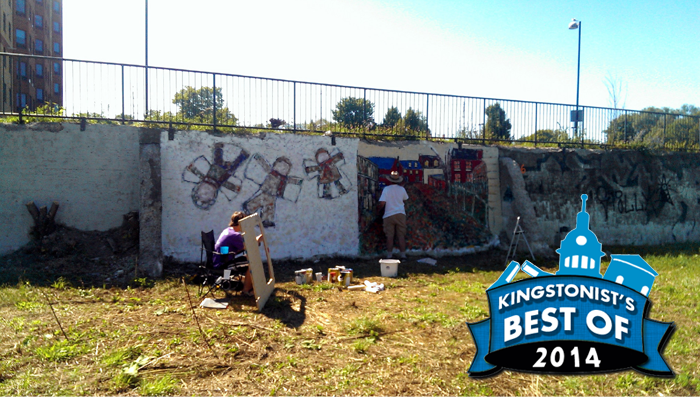 The Water Access Group, who brought us the Shoreline Shuffle, has teamed up with the Friends of Kingston Inner Harbour to create Kingston’s first ever street art festival from August 18-24, 2014. City Council unanimously agreed that a festival celebrating talented Kingston artists perfectly reflects the city’s Culture Plan and Art in Public Places policy. On The Wall Street Art Festival will take place over the course of the week, with twenty Kingston artists painting, drawing and building artworks on the retaining wall that borders Doug Fluhrer Park at the end of Wellington Street. The artists will work daily from noon-8pm, creating large- scale works while members of the public are invited to visit the park to watch their creations come alive. The finished product will remain for one year and then painted over at what will hopefully become an annual event. On Saturday, August 23rd a Celebration Day will take place in the park with live music, food, flash mobs and other fun, family friendly events from 3pm-8pm.

Many cities all over the world have incorporated street art on the sides of large buildings, around everyday objects such as phone booths and even on sidewalks. These works of art add beauty and interest to the cityscape, and in many cases can also inspire and challenge.

The On The Wall Street Festival

hopes to democratize urban art in the City of Kingston and celebrate creativity by transforming the waterfront park into a lively public art venue where citizens and tourists alike can watch artists at work, from the beginning to completion of their unique contemporary art projects.

While the event is being sponsored, there is still a need for more funding to aid in the success of the Celebration Day. An Indiegogo campaign has been started, seeking out $6000 to go towards honorariums for the performers, a stage, chairs, tables and a solar powered sound system. Exceeding this goal will mean more, much deserved compensation for the artists and performers.

A list of participating artists can be found here. Be sure to visit the Indiegogo campaign to learn more about the impact art in public spaces can have and why it’s an important part of our community.

One thought on “Best of 2014: On The Wall Street Art Festival”