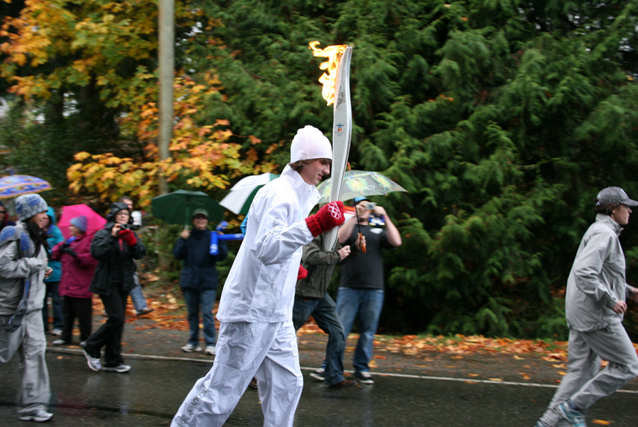 On December 14th, less than one week away, the Olympic Torch Relay will make it’s way through the Limestone City, with a brief celebration that will be held at Springer Market Square.  The City is pulling out all the stops to ensure that the torch is met with a proper amount of fanfare, and they’re encouraging Kingstonians to line the relay route from start to finish.  The Olympic Torch will be meandering through the streets of Kingston as follows:

Prior to the torch’s arrival, festivities at Market Square will include an address by the Vancouver Olympic Torch Relay Committee, a welcoming ceremony by the Katarakwi Dancers, as well as musical performances by Le Clan D’estin and Tea for the Voyage.  After the runners touch down, the torch will be used to ignite a special cauldron, which will hold the flame until the conclusion of Kingston’s community celebration.

The following day, the Olympic Torch departs the Limestone City well before rush hour, but not before visiting some other points of interest.  Between 6:40 am and 7:40 am, the torch will go for a short boat ride at Portsmouth Olympic Harbour, pass by the Ongwanada Resource Centre, and enjoy a brief stop at the Ambassador Hotel’s parking lot.  I’m not certain who came up with the last destination, as nothing says Kingston better than a parking lot.

Back when Calgary hosted the games in 1988, I was too young to really understand the significance of the torch relay, so I’m sort of looking forward to it this time around.  However, I’ve also become somewhat disgusted with the numerous controversies surrounding the 2010 Winter Games.  Accordingly, amongst all the cheering folks lining the route, there will likely people jeering as well.  Special thanks to ciboulette for today’s accompanying photo of the Olympic Torch early on during the 100-day, cross country journey.

3 thoughts on “The Torch Cometh”