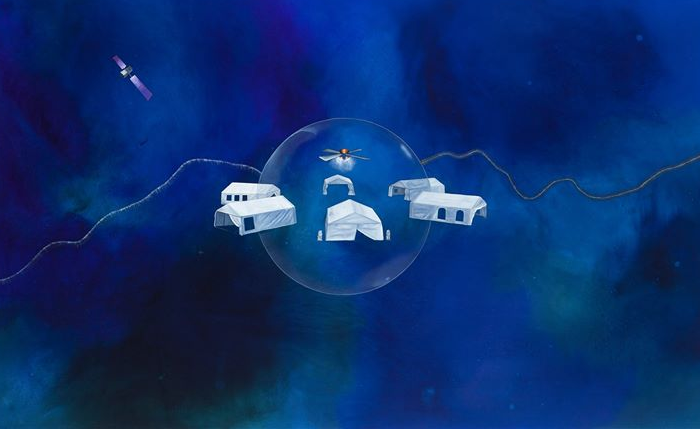 Just about a year ago exactly, Megan McNeil, general director of Modern Fuel Artist-run Centre, explained to me how thrilling the imminent move to the Tett Centre was going to be: “We’re so lucky to have this. The City of Kingston is very fortunate.” At that time, March of 2014, the campaign to open in the Tett was already some ten years in the making. “It’s very exciting,” she had said.

Finally, on the 31st, the Centre officially opened its doors. Fully accessible, filled with light, and overlooking the lakefront on picturesque King St. W., the new home for Modern Fuel is impressive. The choice for opening exhibit, meanwhile, is fascinatingly odd: the first piece you see walking in is a cast relief mounted on the wall that says, in ominous caps, ABANDON SHIP.

The irony aside, Old View From Nowhere by Jennifer Dorner and David Poolman is a fun show to check out. A cheeky, postmodern treatise on today’s “slacktivism,” the exhibit is equal parts hilarious and depressing. In Dorner’s Four Hemispheres painting, for instance, tiny renderings of plastic water bottles scatter a depiction of the globe, in all of the spots where lakes and rivers should be (three Culligan-style jugs sit where the Great Lakes would be, for instance). If that gets you down, look to the floor in the corner and smile at Poolman’s Protest Cancelled Due To Rain. The piece is essentially an overflowing pile of 1500 mini protest signs—all blank— and speaks to the capriciousness and ultimate apathy of the average armchair activist. All that’s missing is a fleeting hashtag.

Poolman’s installed pieces are the real showpieces of the exhibit. With comedic relief comparable to the aforementioned “Abandon ship,” (did I mention the letters are cast to look like split open hot dogs?), the ominously-named Doom turns out to be a table laden with cast aluminum pizzas, made to look charred black from too long in the oven. One slips precariously over the edge, ready to split in half. Meanwhile, a two-foot tall dunce cap taunts from the far wall, as if to say, “Next time, set a timer.”

And, of course, time is an undercurrent of the whole show. With Poolman’s blackened pizzas and scorched sandwiches, Dorner’s vision of plastic-choked waterways, and a dime-sized hole in a podium with a stark inch-high sign saying nothing more than “Dead People,” Old View From Nowhere isn’t all laughs. We may well yet need to abandon ship. The question is, to where?