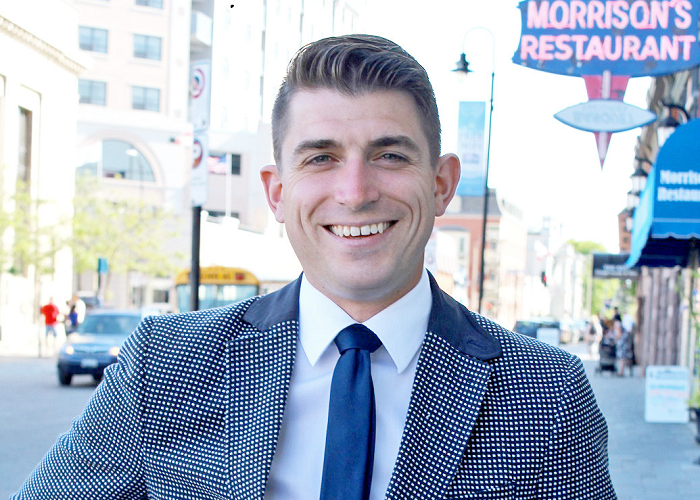 Nathan Townend was born in Pembroke, Ontario, lived in Kingston for 5 years as a child, but spent most of his school years in the United Kingdom where his father served with the British Army. A long time-leader, Nathan has been involved in politics for the past 15 years. He was the UK’s representative to a global young leader’s conference in 2004. He was elected chair by his peers from around the world and delivered a speech at the United Nation’s General Assembly, meeting with world leaders and then Secretary General Kofi Annan.

Involved in the Kingston community, Nathan is an elected executive member of Public Service Alliance of Canada Local 901. He serves on the advisory council for Open Kingston, an organization dedicated to promoting citizen engagement, education, and accountability in municipal government.

Nathan served as a policy advisor and core team member for a mayoral campaign in 2014 and is currently the interim-President of the Kingston Greens. In November of 2014 Nathan was nominated in a preferential ballot to become the next Green Party candidate for Kingston and The Islands in the 2015 federal election.

1. What unique experience and insight sets you apart from other local party candidates? Why do you believe that you are the best person for the job, and most importantly, the best choice for voters in Kingston?

I am a farmer and active community member. I completed grad school at Queen’s and lived in Kingston on and off as the child of a military family. I am fiscally responsible, socially progressive and environmentally conscious. This threefold philosophy, expressed pragmatically in my policy, is unique to me as a candidate locally and the Green Party nationally. I’ve outlined three reasons why I would be an excellent Member of Parliament.

Add these things to my love for our country, our history and my hope for our future and I would be honoured to represent Kingston and The Islands in Parliament.

2. Kingston has two big ticket public transit and infrastructure projects in the works, namely the third crossing and the expansion of Norman Rogers airport. Do you support these projects, and if elected, how would you work to obtain much needed federal funding to enable their realization?

I support the Third Crossing and airport expansion with important qualifications for both projects. The Third Crossing is my first local transportation infrastructure priority (affordable housing my first priority overall), however, there must be dedicated active and public transportation routes on the bridge. Collective transportation is an important way to live sustainably and going forward, with the right mix of policy incentive and personal choice, it will be increasingly important. When we build big infrastructure we need to be future looking.

That’s why the airport expansion must be a part of a multimodal transportation plan to move people to and from Kingston, the region and the rest of the country. In other words, investments must also be made into VIA Rail and bus systems. I am inspired by Green MP Bruce Hyer who champions the revitalization of rail in our country. We should not put our eggs in one basket (flight) or we will miss the opportunity to encourage robust ridership on our national trains which will be important in realizing the collective transportation needed in a 21st century, low carbon economy.

Concerning payment, these and other infrastructure projects can be funded by the Green Party’s municipal financing policies. First, Green MPs favour transferring 1% of GST (without raising taxes) to municipalities to create greater parity between what cities and regions need to pay for and what they receive as a percentage of tax dollars levied. Second, Green MPs favour streamlined processes for infrastructure funding. For instance, I have spoken about 6, $500M funding pots that municipalities could apply for under different criteria to have their project paid for in full. This would lessen the red tape of the current process where municipalities need to apply to two other levels of government for 1/3 of the capital costs respectively while raising 1/3 themselves. One of the ways to cover some of these expenditures is to raise the corporate tax rate to 19% (which would keep us competitive with other OECD countries).

3. The government recently passed Bill C-51 expanding upon Canada’s anti-terror legislation. Do you support Bill C-51? More importantly, do you believe this legislation will make Canadian communities safer than they were before the bill was passed?

No. I think C-51 is an affront to Canadian democracy. Green Party leader Elizabeth May was the first to speak out against this legislation in Parliament and I have joined my NDP colleague, Daniel Beals, on numerous occasions to bring awareness to the threat the Bill represents to residents’ ability to organize and protest – two fundamental pieces of a healthy democracy. There are also concerns with respect to the increased power of CSIS and lack of oversight it would have.

4. Regarding the necessity of electoral reform, are you in favour of amending Canada’s electoral system to ensure that Members of Parliament are more representative of the popular vote? What is your stance concerning the current “first-past-the-post” system?

The Green Party is fully committed to changing our electoral system. We must abolish the current first-past-the-post system. As MP, I would advocate for a parliamentary committee to decide which type of proportional representation is best for Canada. I prefer mixed member proportional where half the House of Commons reflects the popular vote and half represents members from (enlarged) ridings. Indeed, we ought to safeguard local representation as a fundamental means for Canadians to have their voice heard in Parliament.

Greens would make support of any government conditional on electoral reform. Let’s make this federal election the last unfair election.

5. Communities throughout Canada have been hit hard by global economic uncertainty, resulting in job loss and increased risk of poverty. If elected, how would your party stimulate the economy and encourage the creation new jobs? What spinoffs or specific programs do you envision Kingston benefiting from?

To address poverty specifically: the Green Party is the only party proposing a Guaranteed Livable Income for all Canadians. This would amalgamate the numerous social assistance programs that currently exist into one, more efficient payment. This policy was tested in Dauphin, Manitoba with much success: quality of life increased, educational attainment grew and health outcomes were improved.

As Kingston and The Islands’ MP, I would push for an increase in infrastructure spending to the tune of $6.4 billion/year (1% of GST). This is the most ambitious of all the parties’ infrastructure commitments and it does not rely on raising taxes. It would help to create tens of thousands of jobs while repairing our crumbling bridges, roads and public buildings; Queen’s University for example has millions of dollars of deferred maintenance that we must address.

In tandem with this boost to Canada’s economy, the Green Party would implement a National Sustainable Jobs plan to unleash an army of tradespeople to update existing structures to be more energy efficient – saving Canadians millions of dollars in energy costs in the process.

I have also proposed the revitalization of the Kingston Penitentiary site as a distillery district and tourist hub. I would work to see the site devolved to the municipality for local decision making in partnership with stakeholders from all sectors. The distillery district would connect the Tett, Isabel and downtown by a series of waterfront trails and special public active transportation routes to create a corridor of arts, culture and sport. The distillery district would build on our position as the fresh water sailing capital of the world and the burgeoning local food and local brewing market in our region and include residential development for all incomes.

6. What do see as the biggest challenge facing residents of Kingston and the Islands over the next five years? Further, if you are elected as our Member of Parliament, how do you propose to address this issue through government?

Sustainability is the biggest challenge facing Kingstonians and Islanders over the next five years – financially, socially and environmental. This is especially true for three demographics:

Students are saddled with unreasonable levels of debt, especially given the precarious job market for young people. Youth unemployment is double the national average. Green MPs will work to abolish tuition fees by 2020 and eliminate student debt over $10 000 (as has been done in Germany and other European countries) within a balanced budget. This is financially sustainable.

Canada’s population is aging. We must ensure that all residents of Kingston and The Islands have a secure, healthy and meaningful retirement. The Green Party is calling for a National Seniors Strategy to this end. Too many seniors in Canada are living in poverty. This is unacceptable in a nation as prosperous as ours. I favour augmenting the CPP and establishing a Guaranteed Livable Income so all in Canada can afford food and accommodation without financial stress. This is socially sustainable.

We hear a lot of talk from the other parties about ‘the middle class’. But, there are Canadians and certainly Kingstonians living in impoverished conditions that must be improved. As Kingston’s next MP, I will be a strong voice for the less fortunate in our city and across Canada. Again, a Guaranteed Livable Income is part of the solution to this crucial issue facing our country. Greens also suggest a Carbon Fee and Dividend. This policy would put a fee on pollution and give all collected funds back to Canadians providing additional income and curbing harmful emission levels. This is environmentally sustainable.Nathan