Professional poets known as rhapsodes were perhaps the most prestigious storytellers of ancient Greece.  Moving from town to town, they recited from memory the epic poems of Homer, the catalogue poetry of Hesiod, and the satires of Archilochus.  The rhapsodes’ sheer mental discipline set a high standard for future bards to follow.

In recalling the skills of the ancient poets and the intimacy they enjoyed with their audience, it’s tempting to believe that such narrative virtuosity has become something of a lost art in our media-saturated age, when perhaps the most representative means of communication is the 140-character tweet.

But attend a session of Mouthy, Kingston’s monthly storytelling series, and you might get a different opinion.

Mouthy provides a forum for guests to dabble in engaging storytelling by featuring a different theme each month.  In January, it was diary readings.  On Tuesday night, it was local stories, and the group met at Sydenham Street arts venue The Artel to share compelling tales with a Kingston flavour.

Queen’s student Laura Kelly was one of the chief organizers and helped emcee the Tuesday meeting.  Mouthy, she suggested, was a less passive form of entertainment. 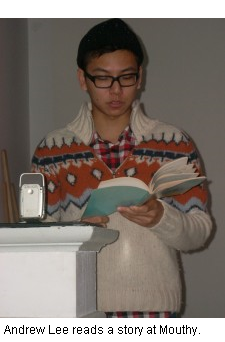 “I love storytelling,” said Kelly.  “It’s something that people don’t often get to do.  We have our lives where we sit around and we watch movies together, or we’ll go to a concert and we’ll passively absorb this media, but we don’t necessarily get to actually sit down and talk to each other in a semi-formal setting where you’re supposed to make a show out of it.

“[Storytelling] used to be the oldest form of entertainment…back in the days before TV, you would sit around and you would tell stories.  I feel like back in the day, having local storytellers would have been a big thing…it was more of a valued art.  We’re trying to bring that back.”

Tuesday’s meeting was recorded for CFRC and ran the gauntlet from urban legends to drunken misadventures and run-ins with the law.

Queen’s alumnus Andrew Lee kicked off the proceedings by reading from a book of local stories.  He told of a supposed “sea serpent” that had apparently been sighted near Kingston in the 1830s.  In a screed titled “Kingston’s Ogopogo Was a Hoax”, fishermen near Cartwright Bay claimed to have killed a sea creature with the head of a dragon and “eyes of fire”; we can only assume they were highly, highly inebriated.

Kelly related how, as a child, she was fond of catching minnows in a bucket.  When one day she managed to catch a mole, she attempted to bring it into her cottage.  Upon being told by a parental unit that this would not be possible, she attempted, in her youthful naïveté, to set the mole “free” – by throwing it into the lake.

(The story reminded me of my own ill-fated childhood attempt to keep a pet caterpillar, when I learned the hard way the necessity of putting air holes in the jar.) 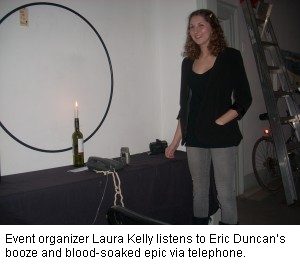 The group was treated to a riotously entertaining phone-in story from Eric Duncan, a former CFRC program manager currently in Halifax.  Duncan described his alcohol-fuelled misadventures following a concert, in which he managed to shatter a bar’s plate-glass window and tear the flesh off his middle finger to the extent where bone was visible.  Too drunk to go to the hospital, and not wanting to waste four hours of boozing time, Duncan duct-taped a condom over his finger and just kept on partying.

By the next morning, the condom had filled with blood and Duncan finally went to Kingston General Hospital.  The nurse was unfazed; his finger was treated (with excruciating pain) to peroxide.

Fine Art student Carlyn Bezic detailed her darkly humorous attempt at hitchhiking when, on a lark, she and her friends flagged down a passing pick-up truck.  Their smug satisfaction turned to mounting horror as they climbed into the back – full of rusty sheet metal – and held on for dear life while the truck roared down the highway.  Her friend grabbed her hand (Thelma and Louise-style) so tightly that it bled, looked at her, and said, “I don’t want to die.”  Good times.

Not quite The Iliad, but highly entertaining all-around.

In the final story of the night, a police officer stopped a student who had been hanging with his friends on the causeway bridge – an illegal act, apparently.  The cop questioned him while his friends hid, until it slowly became clear he thought the student was planning to jump off the bridge.

Knowing he and his friends would otherwise get in trouble, the student played along.  The cop took him to a hospital where workers put him in a padded room with blood on the walls – probably not the best place to be if he was trying to commit suicide.

Eventually a doctor came and proclaimed him fit to be released back into society.  I love a happy ending.

The next planned meeting of Mouthy will likely be in early April.  We can safely assume its members are hoping for an even higher turnout than the roughly two dozen that showed up this time, among them local NDP candidate Daniel Beals.

“Everybody’s welcome at these events,” said Kelly.  “Sharing stories is preferred, but you can sit and enjoy and you don’t have to feel pressured to share a story.  It’s a good opportunity to just come and listen.”