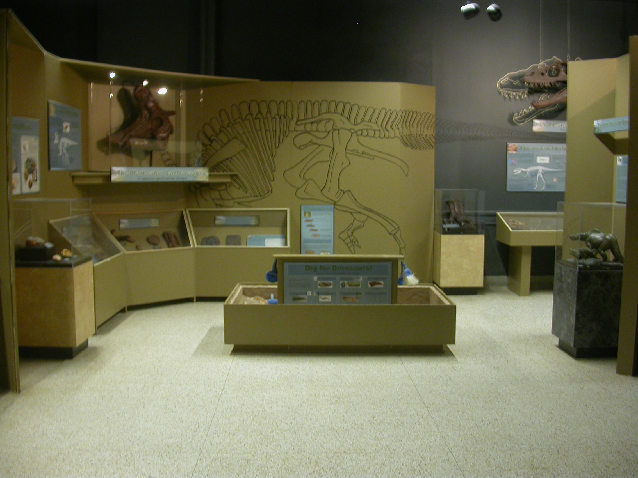 Located on the first floor of the Department of Geological Sciences and Geological Engineering at Queen’s University, The Miller Museum is a small earth-science teaching museum.  The museum houses a collection of Earth’s rocks, minerals and fossils, including a dinosaur exhibit, and features and overview of the geological history of the Kingston area.  Through hands-on, educational group tours, this small but active museum teaches visitors of all ages about the history of our planet.

In the fifth and final interview in our series on Hidden Gems in Kingston, we had the opportunity to speak with The Miller Museum’s Curator, Mark Badham.

1. Tell us about yourself, your background, your education and how and when you came to be the Curator of The Miller Museum.

Like many children, I developed a fascination with collecting rocks at an early age. Unlike most children however, I never grew out of that phase! Colours, textures, and patterns in the rocks caught my eye, and I quickly found out that the rocks contained even more amazing things like naturally formed crystals of quartz with their perfect six-sided forms. From an early age, I knew that this would be my career path.

While completing a B.Sc degree in geology at Queen’s University in the mid 1980’s, I realized that field geology wasn’t my main interest though. Geological mapping and exploring for oil or ore deposits in remote locations was the main focus of my classmates, but my interest always wandered back to the beautiful display minerals rather than the more mundane natural resource minerals. I knew then that I either would end up in a museum setting or a lab where I could work more on mineralogy than field work.

I ended up getting several summer jobs in the department of Geological Sciences and Geological Engineering at Queen’s as a research assistant, the last of which involved filling in for the curator of the museum in 1986 who was unfortunately off on a disability leave. The museum had been without a curator of any kind for over 2 decades by that point, and had slipped a long way into dormancy from its peak years after it opened in 1931. That summer job eventually became a contract position after graduation, and eventually I was hired to fill the full time position of curator.

Over the past 27 years, the museum has grown considerably. The first few years were spent re-cataloguing the vast mineral collection on a computer data base, and starting up an educational tour program to bring primary and secondary school students in to learn about minerals, rocks and fossils. While working full time, I enrolled in a part time M.Sc. program focusing on mineralogy, and eventually attained my Master’s degree in 1997. There have been many facets to this job over the years, and it has managed to keep me engaged with the relatively constant changes in duties – collections management, exhibit design and construction, educational program development and delivery, web development, and public speaking to name a few. My involvement with other local museums through the Kingston Association of Museums, Art Galleries, and Historic Sites has also been fulfilling, and has kept me in Kingston for my entire career so far.

2. Who is The Miller Museum‘s primary clientele – Kingstonians, tourists, schools? How has this changed over the years? In terms of numbers, how did the museum do this year? Better or worse than expected? How do you plan on building on that?

The museum doesn’t charge admission for self-guided visits, so it is difficult to assess just how many individual visitors come through the museum each year. Being in the geology department means we have hundreds of students each day walking through the museum to get to class, making it impossible to count people who are specifically there to see the museum.

The main audience, for which statistics are kept, is pre-booked group visits from schools, naturalist groups such as cubs, beavers, sparks, and brownies, summer camp groups, seniors, and any other group that is interested in the Earth. These groups come to the museum for one hour long, instructor-led, hands-on educational programs about dinosaurs, meteorites, mineral identification, and other topics that fulfill curriculum requirements, or simply for general interest. The numbers were down slightly this year due to the labour problems in the local schools which meant that fewer field trips were taken, but it seems that overall our numbers on pre-booked tours fared as well as, or better than, other small museums.

That being said, the museum is increasingly popular with tourists and local people during the summer months. We participate with other local museums to produce a collective Kingston museum and art gallery brochure and take part in group ads in tourist publications. A recent collaborative project with our local museum group has resulted in better way-finding signs for many of the smaller museums in town, and this has helped bring more people in to the museum. Prominently featuring an image of our dinosaur skull in group advertising (e.g. on the backs of City buses this summer) has gone a long way towards raising our profile with local residents as well. This summer it seems that the museum has been pretty busy with visitors based on casual noting of groups seen in the galleries daily.

We are always working with other museums on special events to help raise our profile and visitation. Recent examples include last June’s successful “Loud Day at Museums” event where local museums featured the “sounds of their subject or collection specialty” on a Saturday for visitors. Miller Museum was demonstrating diamond-saw cutting of rocks for that event, while other museums featured woodworking sounds, marine bells, steam whistles, school bells and other sounds. This coming spring it is planned to have the Miller Museum host Kingston’s first “museum school” pilot project which will involve having an entire class of local primary students move to the museum for a week to run their class using the resources here. Similar programs have been running for years in Western Canada (e.g. “Zoo School” in Calgary), and this is a very exciting new program for this region being undertaken by the Educator’s group of the Kingston Association of Museums.

3. How is your museum funded? Is government funding enough to keep the facility alive and well or are grants, donations and endowments a major factor?

The Department of Geological Sciences and Geological Engineering at Queen’s is very supportive of the Miller Museum and its programs. As curator in the department, a full time University technical staff position, my duties also include curation of lab teaching materials for courses, and general reference collection curation for the Department. This coverage of the single staff salary at the museum, along with the coverage of utilities, custodial needs, and other operating expenses by the Department and the University means that the museum, so far, is surviving fairly well. The educational program expenses are covered through group tour fees, and exhibits are generally funded through the writing of grant applications to funding bodies such as the Canadian Geological Foundation. We have had the generous support of alumni donors as well in the past, which has allowed the museum to undergo a dramatic update with some new display cases, painting, and a new lighting system starting in 2005.

4. If money were no object, how would you use it to make your facility stand out as a premiere tourist destination in Kingston?

Boy, where to begin! If money were no object, the acquisition of a full dinosaur skeleton would probably be very close to the top of the list. Currently we have two dinosaur skull casts on display, and several smaller bones, footprints, and egg fossils but the dinosaur exhibit is probably one of the most popular displays for the visiting public. Upgrading it would certainly increase our popular appeal immensely. We would certainly benefit from having more staff as well (currently there is only one employee running the museum) so that we could run daily activities for individual visitors, rather than having to pre-book programs with a group. While the exhibits of beautiful crystals, rocks and fossils are popular, it’s the interactive events and daily activities that really draw people to a site and make it a “must see” experience for most people.

5. Some museums are static in that they display artifacts and other historical objects that don’t necessarily change over time – what steps are taken to keep things fresh and keep patrons coming?

The museum has been extremely fortunate because donations and successful grant applications have allowed us to mount new exhibits almost every year since 2005. In 2005, the updated Geology of the Kingston Area display was unveiled, followed by an overall gallery refresh/update in 2006-2007 (new lighting, painting) and updated mineral display cases in 2008. Our revamped dinosaur exhibit opened in 2009 to great excitement. 2010 saw the opening of a dedicated classroom space at the museum to run the educational programs, and in 2011 we opened a new exhibit on the fossils of Mistaken Point, Newfoundland, where our departmental paleontologist is studying some of the world’s earliest known multicelled animal life. The newest exhibit, which is currently being installed in 2013, tells the story of a huge mountain range called the Grenville Mountains that existed here in our area around a billion years ago, and how it was virtually identical in scale and origin to the present-day Himalayas. The museum continues to grow and change.

6. What’s the most popular exhibit or event that The Miller Museum offers? Why do you think that’s the case? Are there any new initiatives, changes or upcoming exhibits that you are particularly looking forward to?

The most popular exhibit with visiting children at the museum is our dinosaur display. It seems that everyone is fascinated by these long-gone real-life monsters from over 65 million years ago. The exhibit features bone casts, and a “dinosaur dig box” activity where young (and often older!) visitors can uncover dinosaur bones in the sand using brushes, and this interactive portion is probably responsible for its popular appeal. The Mistaken Point exhibit, along with the original Dawn of Animal Life exhibit from 1998, is also a popular exhibit grouping with University students and others interested in fossils and the history of life as well. Everyone enjoys the displays of beautiful crystals and minerals.

I am always looking forward to continuing my work at the museum to bring enjoyment of “all things geological” to the visitors at the museum, from preschoolers to seniors!

The Miller Museum is open to the public Monday to Friday 8:30 a.m. to 4:30 p.m. and offers guided tours to school children and other groups on request. There is no admission charge, but charges apply for instructor-led educational programming.

One thought on “Six Questions for Mark Badham”