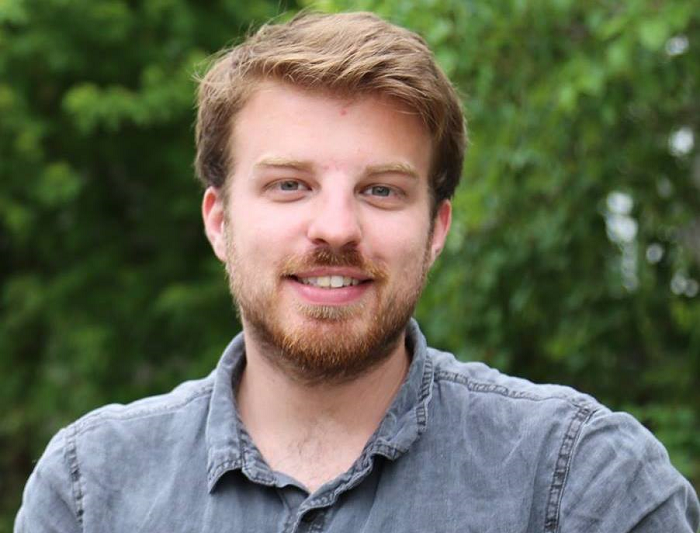 Mike Sheppard has been working with various theatre companies in Kingston for nearly 10 years now.  He founded Blue Canoe Theatrical Productions in 2006, while simultaneously studying at Queen’s University, and acted as Artistic Director from 2006-2013 and Artistic Producer from 2013-2014.  Mike is also the Associate Producer of Theatre Kingston (2013-Current), a member of the Board at the Domino Theatre Inc. and the winner of the Fred Euringer Award in Drama for Producing.  In addition to these roles, Mike also finds time to work as Administrator of The Kingston Arts Council.

This summer marks the first Kick and Push Festival in downtown Kingston.  Mike, and other local theatre producers and various cultural and tourism organizations in Kingston, have joined forces to bring an eclectic mix of theatre to downtown Kingston for a full month.  The festival includes productions from local companies, including Blue Canoe and Theatre Kingston, but also brings in companies from Toronto to keep theatre goers satiated from July 15th-August 15th.  We had a chance to talk to Mike to find out more about him and Kick and Push.

1.Tell us about yourself, your background with respect to theatre and the performing arts and how you came to be involved in Blue Canoe Productions.

Well I graduated from Regiopolis-Notre Dame High School in Kingston, where I was taking a lot of music and drama classes, I liked it but didn’t really see myself continuing on. I didn’t know what I wanted to do after, I was going to go into journalism specifically for sports, but that didn’t work out. About a week into the school year I went back to Regi with my Dad and asked the principal if I could come back to school for a 5th year. He said “You can only come back if you audition for Footloose, we need guys”. Even though I think he was joking, I did.

That year I worked well with my drama teacher Steve Powell, he must have thought I’d make a good director because he offered me a chance to direct a show for the Sears Drama festival. After that, I never stopped, I’ve been directing shows ever since. As I started at Queen’s I formed my own Theatre Company called Blue Canoe Productions with the goal of giving other young people a chance to work in all sides of theatre, just like I had. I wanted youth to feel like that had a place where they can direct, act, design, sing, dance with their peers in our community. To be honest I thought Blue Canoe was going to be a one hit wonder, do a show or two and end, but here we are 9 years later working on our 30th production and I still can’t believe it.

2. Blue Canoe is producing A Chorus Line as part of the brand new Kick and Push Festival happening this summer in Kingston. Can you tell us a bit about the festival? How did it come to be and where did the name come from? Is it modeled after similar festivals in other cities or is this a Kingston initiative?

The festival came from a collective desire to see theatre in The Grand during the summer months. Blue Canoe has been producing summer theatre in Kingston since its formation, last year we did a production of The Producers at The Grand which I think caught some interest.

Colin Wiginton, the director of Cultural Services of the City of Kingston held a meeting after The Producers closed with Brett Christopher from Theatre Kingston, Liam Karry from Single Thread Theatre Company, myself, and Bill Penner, who is a local production manager. Colin had already been talking to Liam and Brett for a while about a summer theatre festival in Kingston, and things just took off from there. The name actually comes from the old railway line that went through Kingston, it was the nickname for the line and we thought it made an awesome name, for its historic significance to Kingston but also it’s something that is uniquely ours. We wanted this festival to celebrate the cool place Kingston is, we wanted to show all the corners of the city through our shows and this name just seemed to fit. I think there are a lot of great theatre festivals in Canada but I really think there is nothing like this one, we really didn’t want to take away from the amazing summer theatre we already have in this area, we just want to add to that excitement. This festival is unique to Kingston and is something you can only see here.

3. Anyone who has been involved in community theatre – or any theatre for that matter – is aware of the amount of work that is involved both on and off stage. Typically, those involved wear many hats to create successful runs and I know you are one of those people. What sparks your interest in taking on big projects such as The Kick & Push Festival in addition to your work with Blue Canoe?

It’s all about the people you work with. Seeing the drive that Brett, Liam, Bill, Colin and so many more have is what keeps me going. They are creative, driven and focused, I feel honoured to have a chance to work with each of them on such an important project.

I think this festival is very important to Kingston, I’ve produced a lot of theatre with pretty much every theatre company in Kingston and (I’m going to put them on the spot here) it has a tendency to be the same old thing. We get satisfied by producing theatre that is simply okay, or finished, I hear a lot from people “Lets just get the show up and running”. Which there isn’t anything wrong with that, there is room for community theatre of all types in every part of the country and for a lot of people that’s what they want. But for me, two people in their 60s sitting on a bench talking about their sex lives in the 80s is something I’ve seen enough of to know how that play will go.

This festival is a step to something more. Sure some of the shows only take small risks, but at least it’s a start. I love theatre in our community, I don’t regret working with any one of those theatre companies, but I want to see theatre in Kingston grow, and I think it’s been standing still for a few years.

4. How were the production companies from outside of Kingston chosen for Kick and Push? Were the shows each company will perform chosen specifically for the festival? What sort of guidelines were provided to the companies with respect to the types of shows they will perform?

We really stuck to the shows we wanted to see. The idea of a play about a series of events around cars really interested us. We knew the group that put on AutoShow, Convergence Theatre, in Toronto and thought it would be a wonderful piece here, considering the amazing Market Square we have downtown, we wanted to animate it. But we did want it to be something more for Kingston, so we started to talk to local playwrights and changed a few of the pieces from the original. So the AutoShow you’ll see in the K&P is still unique to our community.

I think we all pull from about the same few hundred audience members. The circle of those who see theatre in Kingston is most likely a lot smaller than we think…I believe this is because whenever you see a large cast show sales are pretty high, when you see small ones sometimes they are pretty low. Makes me think a lot of friends and family go, and a dedicated bunch from there. I think growing the audience is always a challenge, a festival like this would hopefully bridge some of the audiences each company has built up over the past few years.

The best thing about small communities, especially Kingston, is the local support we get. We have amazing partners and sponsors from our community which include the major tourist partners such as Downtown Kingston, Visit Kingston (Kingston Accommodations Partners), Tourism Kingston and The Great Waterway. Local business that join us and get behind our projects is always amazing to see, getting a chance to work with groups like the Kingston Arts Council and Kingstonist is all unique to Kingston and makes producing theatre a delight. I love working with other groups to support what they do as well as showcase our events.

I love Kingston summer events, there is always something to do in Kingston, we’ve made sure K&P highlights everything going on this summer through our social media, I’ve always loved using #ygksummer, #ygkyouth, #ygkarts, and sending out other cool things everyone else is doing.

6. The festival is offering a wide variety of shows, covering an interesting array of topics and, in some cases, using unique venues. Can you give us some of the highlights of who else is performing at The Kick and Push Festival and what their shows are about?

I’ve heard said so many times and have caught myself saying “There is something for everyone”, but this year I feel this statement might actually be true. We have a few spooky ghost stories, an adventure show for kids, a classic Broadway musical, a show where you do the traveling, a backstage time tour of the Grand Theatre, shows outside and inside throughout the downtown. We also have a wonderful workshop series for those who might want to try their hand at an art form.

The Cellar Door Project is presenting Tall Ghosts and Bad Weather which is a dramatic exploration of the Lower Burial Ground at St. Paul’s Anglican Church on Queen Street.

Theatre Kingston brings us Shipwrecked! This is an amazing adventure following the stories of Louis de Rougemont (as told by himself). A great show for the entire family as the Grand Theatre is transformed through imagination as we hear an amazing story of bravery, survival and flying wombats.

Single Thread Theatre presents Ambrose, a wonderful tale of Ambrose Small who after selling all his properties including The Grand Theatre, went missing and was never seen again. This show travels through the various corners of the Grand in search of the ghost of Ambrose.

And of course we have AutoShow, a series of plays in and around cars throughout Market Square. This show is going to give you a very unique theatre experience with plays you have never seen before making their debut right here in Kingston.

With A Chorus Line, Tall Ghosts and Bad Weather, Shipwrecked, AutoShow and Ambrose, this festival has so much to offer, be sure not to miss any of the action from July 15th until August 15th, tickets are on sale now.