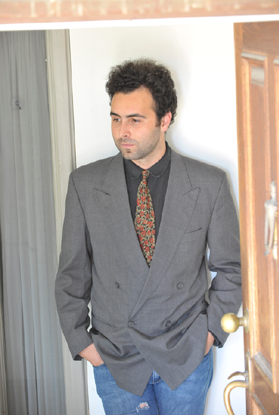 Michael Lista is an asset to both Canadian and modern poetry. He published Bloom in 2010 with the House of Anansi Press, now writes for the National Post (On Poetry) and most recently, acquired the editorship of poetry for the Walrus. A man whose tenure is the result of prodigy, he is a star of his generation of poets. At the Kingston WritersFest this year, he read from his upcoming work, poems that are not about Paul Bernardo, but about the era in which he was committing his crimes. He said there that he wants to make poems that look like a psychopath, and that he wants to do the opposite of what he did with Bloom. Well, Yeats is often seen as a poet who changed as he aged; it seems that Lista is changing as radically before his production could possibly taper. Here is my brief correspondence with the Torontonian poet, who this week is attending the Vancouver 125 Poetry Conference.

1. Bloomstars Stolin, this pseudo-Joycean character in a much more powerful and technological position. This made me wonder: why was Joyce the overarching source of pastiche for your publication?

I used Ulysses as a narrative gantry in the hope that my fooling with it, and the feelings of incredulity and outrage that that would inspire in readers, tinkering with the most dangerous and powerful of 20th century literary monuments, would strike the reader as a faithful simulacrum to Slotin’s work in the lab on May 21st 1946. Scientists called the experiment he was performing “tickling the dragon’s tail.” I needed a sufficiently big, mean dragon.

As I continued to work on the book (it took me about four years to write) I realized more and more, though, how much Slotin had to do with Odysseus himself. And so I think in many ways the book starts out more under the shadow of Leopold Bloom (whose name is one of the many puns folded into the book’s title, the other important one being Harold Bloom and his theory of the anxiety of influence, something Slotin is acutely feeling) and then moves backwards in time as the day progresses, ending more in the shadow of Odysseus himself.

2. I’m wondering if you were in Montreal at the time Nicolas Dickner, who writes for le Voir like you do for the National Post, and debuted not too long ago. He seems to have a similar career history to yours. What writers of Montreal do you connect with/would like to mention?

No I’ve never met Nicolas Dickner. I spent most of my time in Montreal either on my own working on Bloom, or else with my then-girlfriend or my sister, and didn’t really swim too deeply into the literary scene there. Carmine Starnino is one Montreal writer who was very encouraging and helpful when I was starting out. After I left the city some other cool younger poets moved in: Josh Trotter and Gave Foreman. Excellent poets both. I wish they’d been around when I was there. And of course my good friend Andrew Hood deserves a shout-out here. Many an afternoon turned into many a late night at the local brew pub in those years. He’s a fantastic short story writer.

3. Now, your career again: this summer you became the editor of poetry for the Walrus? Could you tell me how you plan to improve the publication with your editorship?

I don’t know if I feel comfortable saying that I’m going to improve The Walrus. It’s a hard thing to improve. Plus my predecessor, Jared Bland, put together a pretty spectacular poetry program. I plan on continuing to offer our readers what they’ve come to expect: poems that are intellectually and linguistically daring and yet still deeply connected to the general reader, and to the emotional currents that bind us one to each.

4. Your upcoming work is to cover Paul Bernardo, and as you said at the WritersFest, to make a “psychotic” poetry. Do you see the poet’s job as partly the same as the historian’s?

I need to make an important distinction here: my new work does not intend “to cover” Bernardo. It’s quite the opposite; It is not about him. It’s more about us, the Canadian imagination, both at the time that Bernardo was committing his crimes, and now, twenty years on, its flaws and allergies. It’s about the twinge of guilt and terror that closes in around that part of our mind when we even mention his name. And I’m looking to see if there isn’t a sympathetic connection that I can represent aesthetically between the solidarity of silence that prevents a mimesis of what happened and the psychopathic personality itself, devoid of empathy (empathy, remember, forces us to feel our neighbour’s pain). It’s a book of poems that isn’t about Paul Bernardo.

As to whether the job of the historian and the job of the poet are the same, the two were fairly tightly braided until the Occitan troubadours really distinguished the lyric as a separate mode of poetic thought. This is an over-simplification of course, but I guess in that moment the poem didn’t necessarily simply have to be the record of an event, an interpretation and explication of it, but an actual event itself, an aesthetic event. And so in that sense poets had the freedom to not only mine the quarry of history but to become the quarry itself.

My interests are in what doesn’t make it into our—especially Canadian—history. I first heard of Louis Slotin when I was twenty-two, and only then by accidentally surfing around on Wikipedia and stumbling upon him. I was amazed that I could go so long without having heard of him, someone who at one time was sixth in the chain of command in the Manhattan Project, a man who was once called “the chief armourer of the United States.” But he didn’t conform to Canadian ideas about heroism, especially as outlined in our thinking from the 1960s in books like Atwood’s Survival or Frye’s Bush Garden. He wasn’t a collectivist; he was protean and singular, and therefore the Canadian imagination couldn’t accommodate him. To America’s Thomas Edison, whose invention was protean and singular in the most literal sense, we offer Alexander Graham Bell, whose invention is utterly useless unless you’ve got a friend. A similar thing is happening with our memory when it comes to Bernardo. Where there is no history, there is no longer an event; and so I suppose my job is to create an alternate event that includes the fact of its exclusion from history.

5. You dress well, and I was wondering how much thought you put into dressing well as a writer? A poet like Charles Bukowski was self-proclaimed recluse, and didn’t dress well. Is fashion necessary to your artistic recognition?

I can only assume my stylish duds are why people pay what attention to me that they do.

6. Back to literature: do you have any recommended reading for the non-artist-type Canadian?

I’d happily recommend Champlain’s Dream, an incredible history of the founding of this country by David Hackett Fischer that won the Pulitzer Prize, and is an absolute triumph of narrative and scholarship. Although it’s a bit dense, Mimesis by Edward Auerbach is an essential and bracing monument to the representation of reality in Western art. And in terms of poetry, I think Ken Babstock’s second collection of poems, Days into Flatspin is as entrancing an introduction to our national poetry as you’re likely to find, as precocious as it is inviting.