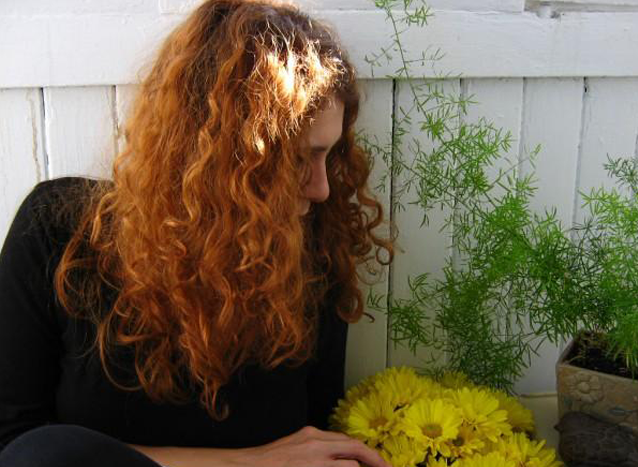 I’m not going to spend too much time setting up this latest round of six questions.  Suffice to say that after listening to a few of Megan Hamilton’s songs, I instantly became a fan and knew that I had to do a feature interview. You can catch Megan Hamilton and The Volunteer Canola (Adam White (bass, b/u vox), Andrew Bartle (drums), Craig Browne (electric guitar, MicroKorg, b/u vox), Ben McLean (road/merch manager)) at the Toucan this Saturday, along with Entire Cities, another band we’re pretty fond of.

1. Up Until 2009 you were living in Toronto, and by all accounts you were making quite a name for yourself.  With glowing reviews from the likes of Exclaim!, NOW Magazine and many others, why relocate to Kingston?  Has the change of scenery helped, hindered or altered your plans as a musician?

Megan Hamilton: The short answer is that I needed a change of scenery. Kingston has been a wonderful new city to explore. The music scene is vibrant, and lots of friends tour through town. I’m enjoying the pace and getting to know new people. It’s affordable. I’m close enough that I can get to Toronto when I need to, and I think I had established enough connections so that I’m still in touch with what’s happening there, which is important for the music stuff. I’m trying to branch out more to the rest of the country, so to that end, it doesn’t matter where I reside. I really like it here.

2.  Your softmore album entitled See Your Midnight Breath in the Shipyard was released last April, and presumably you’ve been working on some new material.  Has your experience living in Kingston trickled into any new songs?

MH: Yes, but my pace is much slower. I think that has to do with life changes, as well. I went almost an entire year without writing a song after See Your Midnight Breath… I don’t worry about that, though. I don’t feel like I must write something every day – I write when I’m inspired to write. The subject matter is a bit different since coming to Kingston, I guess. But a lot of that is frame of mind. I’ve been writing more fragments and then working them through later on – combining pieces. That’s not a way I’ve worked before, generally. My better songs are ones that start with the lyrics – where a natural rhythm reveals itself, and then the music follows, so I’m trying to stick to that method. The melody is informed by the words. And then the instrumentation and production follow from the combined song structure.

3.  From The Alan Parsons Project to the Goo Goo Dolls and Nickleback, there are certainly many unique and otherwise strange band names out there.  So I have to ask, what’s up with the name: Volunteer Canola?  Where does your band’s name come from?

MH: We recorded the first two albums on the Saskatchewan prairie – down the road from producer/engineer Mark Vogelsang’s parents’ farm. They are canola farmers. Volunteer seeds are the seeds that are supposed to die through the winter, but instead sprout a new plant come the spring. For our first show with the band, I had to think of something to call them – we’d just finished recording Feudal Ladies Club (first album), so the term must’ve been fresh in my mind from Mark’s Dad. Somehow, despite it’s odd name, it’s stuck. And the band are essentially volunteers, yuk yuk yuk…

4.  You must have some pretty interesting stories from being the lone female on the road with a band full of guys.  However, I’m equally as interested in their side of the story.  What sort of shenanigans go down when the Volunteer Canola take to the road with Megan Hamilton?

MH: I toured the East Coast with a bunch of guys a few years back, and it was everybody’s first longer tour, so there was a big learning curve. Midnight accidental spooning between men. The rental van getting in an accident a mere 10 minutes after being rented. When we were touring SYMBitS last year, the van stopped working at a Tim Horton’s in Cornwall about a half hour before our last show. But I’ll let the boys speak.

Andrew Bartel: Does making a kid who set up a show cry count as funny? I thought it was… or the endless “For me to be in a comedy club…”

MH: Craig Browne usually creates a “vocal theme” every time we hit the road. There’s a YouTube video of Michael Richards going on a crazy racist rant one night on stage. He later apologized on Letterman or something, but Craig picked up on one of his lines and kept saying it over and over… “For me to be in a comedy club…”

AB: I was waiting in line at the gas station bathroom, and he was saying it in the stall.

Craig Browne: Megan hates Steely Dan and Adam [White] and I revel in this. Maybe we’ll sneak “Kid Charlemagne” into a song when she’s not paying attention.

Adam White: Not only will we be practicing Steely Dan on our time off, but we will have perfected at least two Rush songs by tour end.

MH: Steely Dan makes me want to shoot myself in the face with bullets made of rusted shrapnel.

CB: Megan is the master of the death stare. A joke or comment that she finds distasteful will bring out these suckers like someone pissing off Bruce Banner.

MH: I learned that from my Mom.

AW: At least two of the band members have a primary objective to taste the doughnuts from every province on the way. There’s a reason why I call him “Boston Cream Browne.” Wages will be placed. Hearts will be broken.

MH: Thank god Bartle’s not vegan anymore – he can enjoy the doughnut challenge.

CB: Two men or women. A dozen large coffees. 12 donuts. Last one standing is the winner. There used to be no time limit but I think every contest needs some kind of boundaries.

MH: Craig will not go near any piece of food that has been tarnished by mayonnaise. Last tour we had a different bass player, and he cooked a lot of his food in a camper stove. Bartle was vegan and brought his OWN FOOD TO RESTAURANTS. He also had me scouring the streets of Montreal in search of $40 bottles of specialty beer. He’s studying to be a brewmaster.

AW: Craig and I also plan on having our signature “handshake” photo taken at every conceivable opportunity, now that we’ve become famous.

5.  The band has been performing a lot more frequently around Kingston over the past few months.  How are you enjoying the local music scene?  More importantly, what’s next for Megan Hamilton and the Volunteer Canola?

MH: I’ve been playing solo around K-town, but our first band show in the city will be Saturday May 8th at the Toucan – a free show with our good friends Jetset Motel and Entire Cities. I like the local music scene, although I’ve mostly been playing with out of town bands, I guess. I’m big on the Gertrudes and PS I Love You, Luther Wright – I saw Sarah Harmer play a short set a couple of weeks ago – there are a lot of cool bands in town I’ve been meaning to check out but haven’t had the chance, yet.

Coming up we’re embarking on a tour to Vancouver and back – that’s probably our biggest venture, yet, touring wise. You can check out the schedule here – after that, I think I’ll hunker down and get a next album written. Oh, and I’m getting married.

6.  You seem to be quite active on Twitter, and you’ve stated that you will be keeping up a video blog over on Zunior during your From Here to Vancouver Tour.  Does the investment of time and energy into social media pay off?  How has it benefited you and the band?

MH: Social networking tools are essential for indie musicians. Back when we first toured the east coast of Canada, MySpace Music had just taken off. It was, and still is, an amazing way to network, find like-minded bands to play with, see who’s doing what in the different cities – who they’ve played with, what gigs they have coming up, where they’ve played. I don’t know how people booked their own tours before the internet. I like Facebook for keeping a fan database and sending out invites, keeping people up to date. Twitter’s great for links and short blips of news. The benefits are incalculable, really. Social networking is a skill set these days – one that helps you get to new levels. I booked this tour myself, and could not have done so without the benefits of email, MySpace, Facebook and Twitter. I went to bands’ pages who I knew were touring, and found out which venues they were playing, and built the tour that way. I wouldn’t even have known where to start, otherwise.

3 thoughts on “Six Questions for Megan Hamilton & the Volunteer Canola”