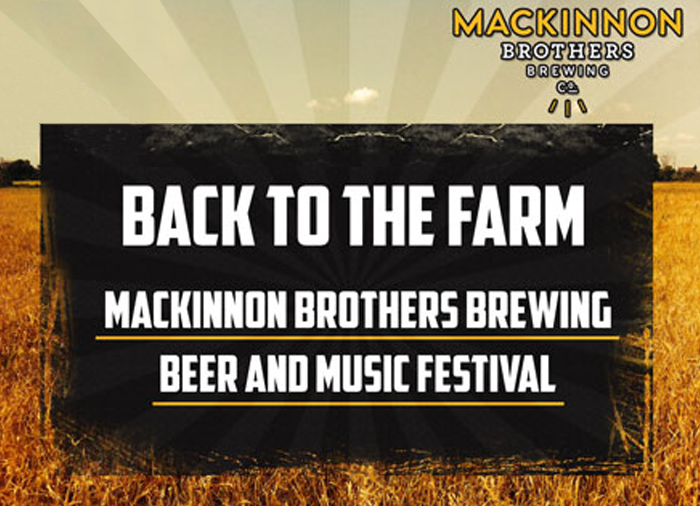 On Sunday, August 23rd, MacKinnon Brothers Brewing will host the first-ever Back to the Farm: MacKinnon Brothers Beer & Music Festival. Back to the Farm will showcase both the brewery and farm that have been instrumental in the Bath-based brewing company’s hugely successful first year of operation. As the name suggests, this family-friendly event will showcase nine local bands, as well as a handful of food trucks (Two Nuts in a Food Truck, Mission Street North and Scottie’s Outdoor Catering), vendors, swimming and free tours (at 4, 5, and 6 pm, each limited to 50 ppl) of the brewing facilities. The musical lineup and schedule is as follows:

The brothers MacKinnon will have four of their celebrated brews available at the festival, including: Canadian Crosscut Ale, Origin Hefeweizen, 8 Man EPA, as well as a brand new beer that has yet to be revealed. Keep in mind, the hops, wheat and barley that are grown on the family’s bicentennial farm go into the beer, which helps connect your taste buds with generations of agricultural tradition. Festival-goers who are looking for something a bit different, can also quench their thirst with wine and cider from Prince Edward County.

Tickets are $20 in advance and are on sale now at ticketscene.ca. You can also pick up tickets at the brewery, Brian’s Record Option, The Mansion, The Red House and The Merchant. Kids are under 12 are free.  The MacKinnon Brothers have ample parking and have laid on two free shuttles running from The Red House’s downtown and west-end locations.  Exact times for shuttles can be found on the festival’s Facebook page.

Kingstonist wants you to hit up the MacKinnon Brothers Beer & Music Festival for free! So, we’re giving away a pair of tickets.  Interested in winning them?  Re-Tweet one of our festival-related giveaway tweets for a chance to win; winners to be announced tomorrow at 4pm.
———
Updated: 8 August 2015: Congratulations to @PamelainYGK who won these tickets!