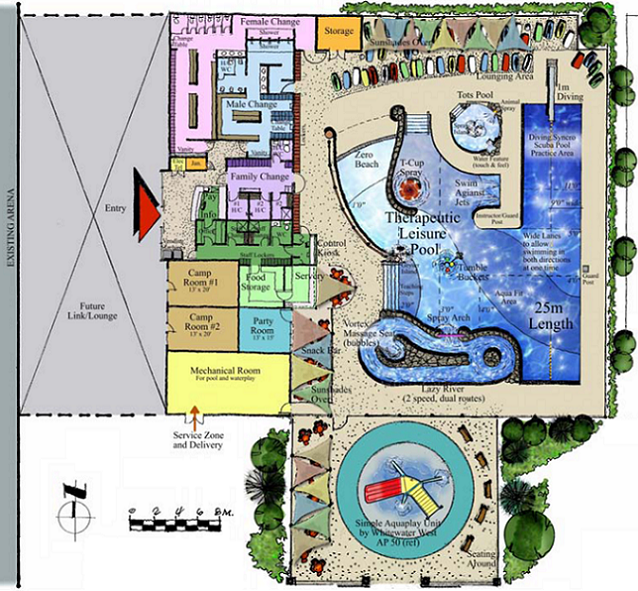 Not that I’m complaining, but there were very few days where we were forced to endure sweltering conditions, and poor air quality this past summer.  As someone who stubbornly refuses to buy an air conditioner, I’m constantly gambling my comfort in the name of energy and financial savings.  For the most part, I’m able to enjoy air conditioned offices during the day, while I’m forced to rely on cold beer and showers to stay cool at home.  On one particularly hot day last month, my wife and I tried to convince ourselves that it was safe to go swimming somewhere along Kingston’s shoreline.  Since neither one of us is in need of a third eye, we erred on the side of caution and stayed out of the watery stew.

Kingston’s lack of safe swimming holes got me thinking about alternatives such as the new splash pad at City Park, and the derelict pool attached to the Memorial Centre.  The latter is known as the Leo Lafleuf Waterpark, which could receive some impressive upgrades as a part of the overall renewal of the Memorial Centre grounds.  Highlights of the long list of proposed improvements include:

The suggested upgrades to the Leo Lafleur Waterpark will cost an estimated $6 million, while the City reports that $2 million would be derived from Federal and Provincial government funding.  Considering the popularity of the splash pad at City Park, I believe that this ambitious proposal has the potential to be hugely successful.  Further, if the plan is implemented in it’s entirety, this small slice of the Memorial Centre grounds will definitely be revitalized during the warmer months.  In case you feel strongly about this project, you might want to attend tonight’s public consultation at 7pm in the Hall Area of the M-Centre.