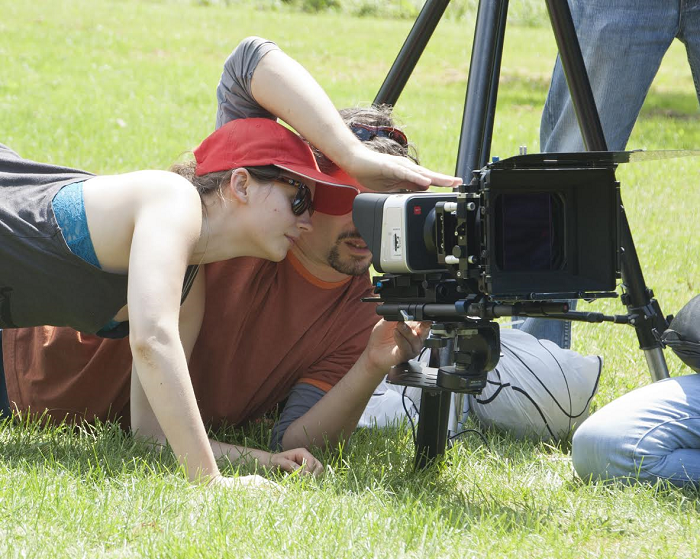 Born and raised in Sydenham, Ontario, Leigh Ann Bellamy, had a quiet but enriched childhood. By the age of fifteen she was heavily involved in Kingston’s community theatre scene. In 2009 Leigh Ann attended the Vancouver Film School for Film Production and although she had intended to try and make a career there, she found herself drawn home. She moved back to Kingston and began her production company CuriousYou Productions. With this company, as well as the aid and collaboration of many others, Leigh Ann wrote, directed and produced three short films and one feature length film. The feature, Fault, will premier at the Kingston Canadian Film Festival in February 2015.

1. Fault is a dark coming of age story, which centres on two female characters who are faced with challenges related to adulthood. What inspiration did you draw upon while writing this emotionally-charged script? Does the story contain any personal elements from your past/life?

It is impossible for me not to write on a personal level. Everything I write contains some elements of myself. Elements, is, of course, the key word in this notion. While I draw inspiration from moments in my life and people I have met, nothing in Fault is verbatim, or even close.

The story takes place around a play that is being staged in a small town. Sixteen-year-old Georgia and her mother find themselves in the awkward position of competing for the same role. I did draw on my own community theatre background for this plotline, however, the mother-daughter dilemma is one in which my own mother and I never found ourselves. My mother and I have done numerous shows together and in fact co-produced Fault without either of us ever flying into a jealous rage.

When I set out to write something, the first portion of the process is collecting. I collect ideas, stories and characters until they start to fit into something larger. Thanks to this process, Fault has many, many true moments within it that have been re-shaped and formed into something new.

2. This picturesque film was shot in and around Kingston during Summer 2013 and 2014. How much of a role does the local landscape play in your film? What location provided your favourite backdrop? What location proved to be the most challenging?

Kingston is a beautiful place in the summer. Having grown up in Sydenham, Ontario, just north of Kingston I was excited to be getting back to my roots and the beauty of Kingston’s surrounding small towns. We were so lucky to have fields, creeks, barns (the list goes on) put at our disposal. Loneliness is a huge theme in the film and the endless fields, long grass, and expansive blue sky made our actors look so small, and helped convey that emotion.

There were many interesting and terrifying location challenges throughout the shoot. We made our small town up of parts of Harrowsmith, Perth Road, Yarker, as well as a few other places. This left us scrambling cast, crew, and equipment from one part of the countryside to another with huge delays any time something crucial (such as costumes) was forgotten.

Our most challenging single location was probably The Creek. It was located over a field and through a forest, bathrooms were a drive away and there was no electricity. We had one day to shoot thirteen pages of the script and had to get them all done before dark. We almost did. We promised we would never discuss this, but there was a sad attempt to light a scene using flashlights and bounce boards. We re-shot this scene several days later. And because of our mad attempt to film at night we then also had to pack up in the dark with only two flashlights and get the gear back through the forest and through the field. Man, does that creek look good though, at least in the shots with light. It’s one of my favorite locations on screen.

3. Fault is the fourth film your production company has mounted and it is your first feature film. What were the biggest obstacles that you encountered as a result of taking on a project of this size? Were any elements of the filmmaking process actually made easier due to the larger scale?

We wanted to shoot a 110-page script (approx. 2 hour movie) with 18 locations in thirteen days. It worked out to shooting around 8.5 pages a day. Professionals shoot around 4 pages per day. We are not professionals, we do not have a professional budget and no one had had a full night’s sleep in at least a week thanks to a rushed and chaotic pre-production.

We lost a person a day at first, to illness including but not limited to: mono, impetigo, a heart condition, and hypochondria. But we stayed the course and after our final eighteen hour day that started at 4pm on the 18th and ended at 10am the following day, only one person threw up due to exhaustion.

Lessons learned? Thirteen days is not enough time to shoot a two-hour feature film with eighteen locations. You can never…ever… be too prepared. If someone else thinks they have influenza A and you feel sick to your stomach, take a deep breath, and remind yourself that this is the most stressful, most wonderful, most terrifying experience of your life and that the doctors in emerg will tell you to go back to set and make your movie.

We came back one summer later to do some pick up shots and reshoot some scenes that weren’t working. Although we didn’t remember all the hard lessons we learned, we did approach the three days with a vigour (partially due to rest, and partially due to confidence) that we had not had the summer before.

And now we have a movie.

4. You executed a successful IndieGogo campaign to help generate much needed funds in support of the making of this Fault. From a funding perspective, do you think the city/province/country could be doing more to help fund creative projects such as this? Do you have advice regarding funding for prospective and beginner filmmakers?

The City of Kingston has an incredible funding system for the arts known as the City of Kingston Arts Fund. Though we applied, we did not receive city funding for Fault, but I have been awarded a small production grant in the past. The problem with CKAF is that it is so broad a category, it is hard to give a piece of the pie to everyone. I find that if I look for grants aimed more specifically at film, I have to look outside Kingston’s safety net, and it is a big ocean. Trying to get funding for very small projects, with no “name” actors, is nearly impossible. That is why IndieGoGo and other crowd funding platforms are such great resources. We were very fortunate to get the kind of response that we did with our crowd campaign. It funded nearly a third of our film.

If you are a young filmmaker, trying to get funding, my advice to you is to write as many grants as possible (make sure you are eligible), try your own crowd-funding campaign and plan to make your movie with as little money as possible. Don’t let the lack of money get in the way of you getting your movie made. Sometimes the most brilliant ideas come of out of the workarounds you go through because you have no budget.

5. When we last caught up with you in 2011, you commented that “there isn’t a lot of professional filmmaking in Kingston yet, but there are a lot of people here who would love to become involved in a film making community.” How has the local talent pool changed since the making of Peculiar Mrs. Perkins and Pretty Pieces? What home grown talent were you able to draw upon in support of the making of Fault?

I feel pretty much the same as I did in 2011 about the amount of local professional filmmaking here in Kingston. There still is not a whole lot of it but the amount of super indie productions taking place is growing rapidly. There have been multiple features made in Kingston in the last few years including my film Fault and Brent Nurse’s movie Stronghold, which will also premiere at KCFF this year. It is exciting to be part of this small indie filmmaking scene.

There is a huge pool of local talent both behind the camera and in front of it. I worked with many Kingston theatre veterans: Krista Garrett, Sandie Cond, Jennifer Verardi, Susan Hazel as well as crew member Michael Gourgon (who was our steadfast sound recordist through the whole shoot). Local sound guy Peter Cassidy has provided post-production sound for the film. Brent Nurse (filmmaker) and Barbara Bell (actor, film and theatre producer, and the artistic director of Kingston WritersFest) co-produced Fault with me. I have worked with both of them before on Digging Up Plato, a short film that won Best Local Short at KCFF last year.

With every new film that I make I find I have a larger pool of people to draw from and with which to collaborate. As I begin to write my next film it is exciting to approach it with key crew members and even some actors already in place.

6. Looking ahead to this year’s Kingston Canadian Film Festival, what are your expectations for this year’s festival? Aside from the screening of Fault, what other films and events are you looking forward to?

I am so excited for this year’s Kingston Canadian Film Festival. Although I have been a part of it before, this will be my first year showcasing a feature film and that somehow just feels different. I think people are really excited to see the movie. We have had so many people involved on so many different levels.

I look forward to the festival every year. They always have great movies, that may have gone under my radar had I not seen them at KingCan. I am really looking forward to seeing Stronghold, my co-producer’s film, as I have yet to see any of it. I am also very intrigued by Tu Dors Nicole which screens both Saturday and Sunday. I think this movie is going to be right up my alley. Leigh Ann, I’d add the film of another female filmmaker, Toronto filmmaker Sarah Goodman’s Porch Stories.

Most of all I look forward to great conversations with the incredible people that attend the festival.