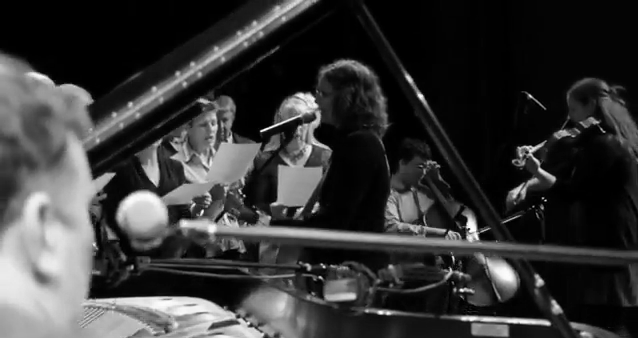 Today I’m thrilled to share the most recent addition to the Skeleton Park Community Songbook featuring Kyra and Tully, as well as huge cast of musician friends and volunteers from the Grand Theatre. Kyra and Tully describe the inspiration of  their song  titled ‘Love in all These Things’ as follows:

The song, which celebrates family and community, as well as courage and perseverance, was inspired by a child who knows a thing or two about determination — Kyra and Tully’s own son, eight year old Kezyan who suffers from a rare disorder which causes him to have frequent seizures. Based on a poem by Kingston poet, Matthew Reesor written for Kezyan and his parents, ‘Love in All These Things’ became a larger project as more and more people from Kingston’s vibrant art community got involved. “Kezyan was struggling with seizures and was having a hard time,” explains Kyra. “Matthew first wrote the poem as a way of reaching out…because when the seizures first started happening Keyzan was almost four years old, and a lot of our friends and family felt so helpless. In our situation, everyday presents its unique challenges. What was so inspirational about the poem is that it’s really about blessings in disguise,” says Kyra. “There is positive in everything, and beauty, even in difficult times. It’s true. And with Kezyan, even when it’s hard and scary, we still see the love and gifts that shine through”.

The poem began to evolve into a song when Kyra and Tully decided to perform it at a musical fundraiser for a friend who was battling cancer. Backed by a band for the first time, the song came to life. In releasing the song as a single, Kyra and Tully hope to celebrate not only their son, but also the power of music to bring people together and to build community. They hope it will help people to feel that they are not alone in their struggles.

Just in case you’re still wondering what the Skeleton Park Community Songbook is all about… In collaboration with 12 Kingston community groups and local professional musicians, The Skeleton Park Music Festival is creating a community songbook & compilation DVD that features a variety of well known folk songs, which reflects the rich diversity of the local community. Parts of the songbook have already been distributed throughout the community, in an attempt to encourage Kingstonians to share music together and learn to sing each other’s songs.

If you’ve missed any of the Skeleton Park Community Songbook tunes we’ve featured in the past, you may want to check out:

One thought on “The Skeleton Park Community Songbook: Kyra and Tully with the Grand Theatre”