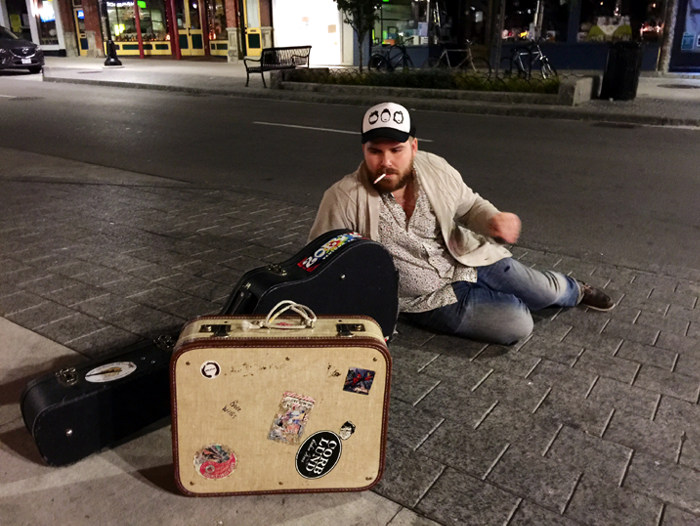 Meet Kody Paul. Or rather, you’ve probably already met Kody Paul. This frontman for The Kodeines is an unapologetic man about town (“I suppose when I needed it, the downtown scene was there for me,” he explains). Catch him sipping a Java at Casa Domenico or a bourbon at the Toucan—or better yet, catch him with a guitar in his hand playing Sunday Fundays at Red House. In Kody’s words, “Red House’s secret shows are the hidden musical gems of the decade. On the last Sunday of every month at Red House we have a party. I think I’ve been to every one. Some real rockstars (and a couple lowly drunks) play real music, real loud, real late.”

If that can’t convince you, nothing will.

Here are our questions for Kody.

1. Can you describe your initial forays into music? How did the formation of The Kodeines come about?

As I did with all of my bad habits, I started playing young. My guitar, the one I somewhat infamously and petulantly insist on playing at all times, I bought that on lay-away with my paper route money over the course of nine months or so. I had some nice people that I just happened to exist around. I met Brock Gouweloos in grade 8. Meeting the insanely talented and kind Adam Newcomb was possibly the greatest thing that ever happened to me. He’s a real genius. We recorded the ironically successful “The Dead Letter Ensemble” on a f—g Firepod or something, and it was amazing. Adam of Newcomb Studios is the most talented guy in the business. I miss him.

Yeah, so anyway, I moved to Kingston and drugs and women became more important than music. Lowest point in my life, really. I got lost. But again, I had the strange fortune of existing around some great people. Shayne Godin and Dylan Carquez, like, holy hell. They were playing in a great band called Buffalo Tree. They were the first two I asked to join the then nameless “Kodeines”. The decision for a bass player was easy; Eli Abrams (Rocket Surgery, Abrams Brothers, Oh Susanna, and one hundred others) was an old party friend and life-long musician. Adding him was a game-changer. The last founding member was Chris Koster (Beginners Guide to Endings, Glorious Sons, etc.). I don’t know what to say about Chris. He’s my favourite person on the planet. Genius degenerate or something. Dan Chalmers joined us a year ago on the drums and, well, I’ll never play with another drummer again. We’re soul mates.

Alternate answer? We were drinking. I don’t really remember. Ha.

2. What are some of your favourite venues or past gigs that you’ve played? What makes them stand out?

We played Virginia’s Wolfe Island Music Festival. It’s a weekend full of everything important to me. We had fun. We played a real set. Like we do every night. I don’t think the guys from Limblifter like us very much, but we got over it pretty quickly. I don’t need to make friends with every person whose ever held a guitar.

When you talk about music in Kingston, you have to talk about The Mansion, The Toucan, The Grad Club, The Wolfe Island Grill. These places fight the good fight in a thankless war. I’d play for those guys any time.

3. What’s coming up for you personally as well as for the Kodeines, in terms of performing? Where and when can we see you play?

We’re finally going to release “Sleeping With Women and Other Dangerous Things” in the next month. Hopefully doing a video with Leigh Ann Bellamy for the first single. Beyond that, you can probably find The Kodeines down at the bar around last call most nights. That’s our nightly gig.

Aaron Holmberg and I are doing a record together one of these years. Hopefully that’ll get done by this summer. We’ve been talking about it since puberty, but I think we’re finally ready for the gruelling filthiness that I’m sure will transpire. I think it’ll be my masterpiece. We’ll see though. Above my pay-grade.

Brett Emmons from Mumford & Sons (long-running joke about my dear friends in Glorious Sons) and I are always trying to find a room to play in. We play a lot. He likes playing music more than anyone I’ve ever met. He lives for it. I admire that about him.

4. Just curious: what would you say is the greatest collaboration in the history of music?

Words like “greatest” and “history” frighten me. I could talk about thousands of bands. We should talk about thousands of bands. Maybe when we’re done this thing. Alright, when Damien Rice and Lisa Hannigan broke-up due to extra-marital activities, and then wrote and recorded “9” together, that to me was a perfect storm of emotion. You want to talk about honesty, well, talk about those kids. I’m a huge fan of The National, The Magnetic Fields, Wolf Parade, and Taylor Swift, Neil Young, and The Boss of course (I had to sneak my girl Taylor in there).

5. A lot of exceptional music has come out of Kingston. Why do you suppose that is? Do you find Kingston’s music legacy inspiring, burdensome, or neither?

Oh it’s surreal. We’re all just drinkers. I hang out with my heroes all of the time. Kingston is magical for that. I’ve played music with Canada’s biggest bands, eaten meals with SNL legends, and hung out with Hall of Fame hockey players.

I have to tell a Doug Gilmour story. Doug was my hero growing up in Cobourg. I had his posters up in my bedroom (actually I didn’t have a bedroom and therefore I didn’t have need for posters, but you get the idea). When I first met Doug I had to pretend I had no idea who he is. In Kingston it’s a little gauche to be star-struck. But we would chat. Doug’s a really polite guy. Anyway, I’m pretty sure my girlfriend thinks he’s a beer rep or a realtor or a plumber or something. Doug will say something like, “Hey Tash, how was that cruise you guys went on?” Tasha will answer out of courtesy and then turn to me and whisper, “What’s that guy’s name again?” “Doug, my love”.

That sums up Kingston to me. Heroes are friends and friends are heroes. The gents from The Hip are the same way. Real community people. Glorious Sons are the hot ticket right now and they are some of best guys I’ve met in Kingston. Oh yeah, Sarah Harmer (the loveliest human). Holy hell, I guess we do make some music around here!

6. Aside from music, what occupies your time, in either work or play? What’s on deck in an average day?

Currently I am working at the Wolfe Island Grill. I love that place. I’ve made a lot of friends through being there. I guess my title is General Manager, but we’re not big on titles around there. From ownership all the way down to the bottom, we all work hard together. We’ve got something cool going on that rock. And wine. Yeah, wine takes up a lot of my day.

One thought on “Six Questions for Kody A. Paul”