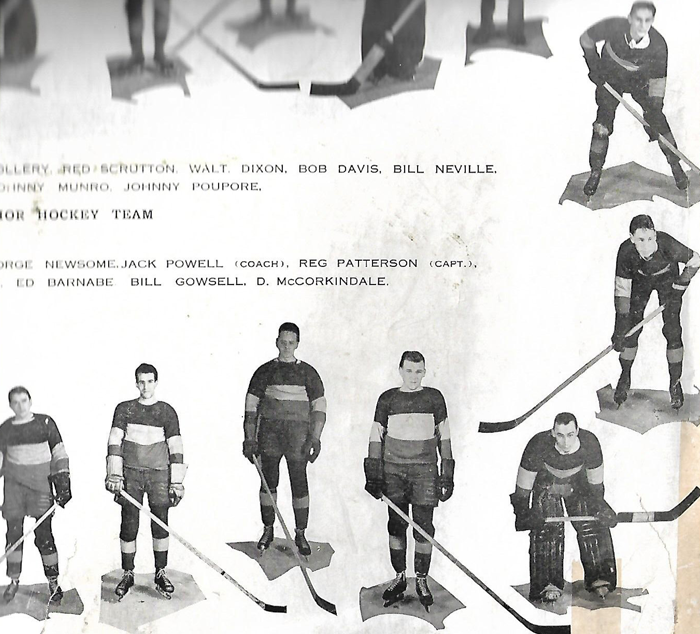 Kingston has a longstanding hockey history. From the first hockey game played in the late 1880’s at the Kingston Harbour, which we have celebrated for the last fifty years with the Carr-Harris Cup, to the Original Hockey Hall of Fame, and the city passion for the Kingston Frontenacs, Kingston is a hockey town. It was a recent discovery about my grandfather that illustrated a new story about Kingston and its rich hockey history that surprised me.

My grandfather, for who I am named, died on April 22nd, 1996. He was a great guy, with a loving smile and who was always ready to tell a story, even if his audience wasn’t. He was also a great athlete.

My grandfather was a goalie for the Queen’s University hockey team in the mid 1930’s. My dad said that because of his well-known skill in hockey, Queen’s recruited him for a spot on the team. He played for Queen’s for a couple of years and left to become a plumber, ultimately becoming the foreman of the plumbing shop at the Queen’s Physical Plant Services.

I did a little more research into his playing career and learned that while at Queen’s he played against the 1936 Olympic team in a game held in Kingston and beat them. I couldn’t believe what I was reading in the Queen’s Archives. I would have never have guessed that hockey games like this 1936 game my grandfather took part in, happened in Kingston.

In celebration of our Olympic success at Pyeongchang this year, let me take you back to a time when Olympic hockey teams came to Kingston to get ready for the world stage. Put on a coat and be ready to cheer with the rest of Kingston at the old Jock Harty Arena in January of 1936.

The Port Arthur Bearcats were the hockey team chosen to represent Canada at Garmisch-Partenkirchen in Bavaria, Germany, for the IV Winter Olympics. Like past Olympics, the Bearcats were honing their hockey skills by competing against Canadian teams before heading to Germany in February of 1936. 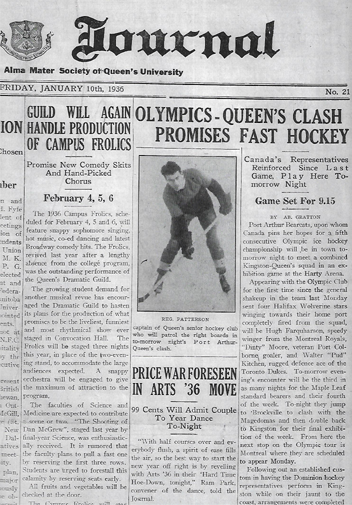 The competition had been fierce and by the time the Kingston game was announced, it would be the third game in three days for the Bearcats. Though it was an exhaustive schedule, traveling from one town to the next, the consensus about the Bearcats in the Queen’s Journal was, “that the team will likely be strong” when it faces Queen’s. In the bottom corner of the Queen’s Journal the starting players are listed and under Queen’s is #1 Bill Gowsell, my grandfather, in goal.

This game would follow the tradition of 1924’s game against the Olympic team led by the Granites hockey team and the Varsity Grad team in 1928. Kingston was buzzing with anticipation. The Queen’s Band would be in the stands playing along to lend a “college atmosphere” to the competition. The puck would drop at 9:15 p.m. on Saturday night, so that Kingston merchants would be able to attend the game.

Friday night January 10th saw the Port Arthur Bearcats playing in Brockville against the Magedomas while the Queen’s team was practising as a squad. Two very different worlds only 24 hours before their match. The Queen’s Journal finished off their article about the upcoming match with prophetic words, “Should be a brilliant display of the great Canadian pastime.”

Electricity filled the old Jock Harty Arena as over 2000 Kingston residents filled the stands and watched the local team battle the best in the country. Sixteen Queen’s players were ready for the Saturday night battle compared to the ten on the Olympic squad.

It took seven minutes of play in the first period before Queen’s scored the first goal. ‘Winky’ Wilson took a pass from Bun Gordon and outskated the Bearcats for the point.

The second period saw heavy action and with ten seconds of play in the period remaining, Wilson picked up a loose puck and again blew past the defense firing his shot in from eight feet out and scoring the second and final goal of the game for Queen’s.

A two-goal lead was all that Queen’s needed for victory; they just had to hold on for the third period. Bill Gowsell started the third period in nets and was brilliant. The Bearcats were desperate to win and threw everything they had left at the Queen’s goalie. My grandfather was not afraid. The Olympians tried their best to score, raining numerous shots at my grandfather but he kept, “hurling himself in front of every shot and kept his net clear,” as reported in the Tuesday, January 14th edition of the Queen’s Journal. 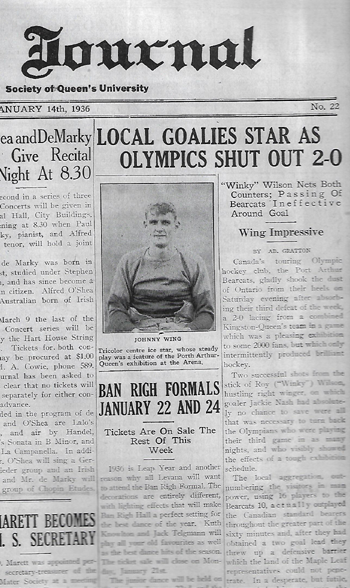 Queen’s goaltending duties were split between my grandfather who was in nets for the 1st and 3rd period, and Red Scrutton who had the second period. The Queen’s goalies were a stand out feature of the game, especially in the final period when the Bearcats threw everything but the kitchen sink at my grandfather.

A post game analysis from the Queen’s Journal reflected on the fact that the Bearcats had played their third game in as many nights, and that most of the players on the ice for the Olympic team seemed exhausted. Queen’s was starting with sixteen players compared to the ten for the Bearcats, which allowed for more line changes in Queen’s favour. But to me that doesn’t matter. My grandfather was a star.

In the Tricolour of 1936, the senior hockey team’s success against the Olympians was noted. “The highlight of a rather dismal hockey season was on January 11th when a team composed of the pick of Queen’s, Kingston, and Napanee, playing under Queen’s colors and coaching, defeated Canada’s Olympic team in a thrilling game by a score of 2-0. Other than this victory . . . the Seniors did not have much success.”

The Port Arthur Bearcats would put the loss to Queen’s behind them and move on to the Olympics where they would finish with a silver medal behind the gold medal Great Britain team.

My grandfather’s hockey career with Queen’s did not last long. He would continue to play hockey locally but eventually moved on to become a plumber working in the Physical Plant at Queens and running the canteen at the same Jock Harty Arena he played at for many years. The old Jock Harty Arena is a long-forgotten memory. Another sight in Kingston history lost to time. I wish I could have sat in the stands that night during the 3rd period to watch my grandfather throw himself around the net as he held the shutout and beat the Olympic squad.

Kingston is filled with rich hockey history, waiting to be discovered. I’m so glad to find this unique story about our town and my grandfather.