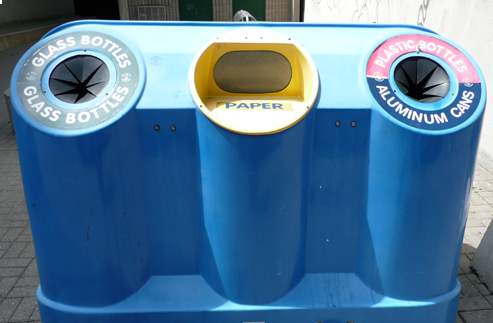 With the beautiful weather finally upon us, I have found myself spending more time outdoors. It’s pretty common to see people outside at lunch, eating in the park or on a bench on Princess Street. I treated myself to some take out last week and ate it as I wandered. The problem occurred when I was done. Where are all the recycling bins? There was nowhere to dispose of my plastic container. I thought I must be wrong so I held onto it, sure I would run into a blue box soon but it never happened. In fact, just finding a garbage can was a bit of a challenge. This put me on a mission to find recycling downtown and the only place I found it was on Bagot Street, outside a parking garage.

I’ve always considered Kingston to be a pretty earth-friendly place. The people who live here are nature-loving folk and the students are always looking for a way to save the world, so how is it that we don’t even have recycling on our city streets? This brings into question some of our other recycling habits. Toronto has been composting since 2003 and we are just now looking into the possibility. Other communities such as Guelph have vast recycling programs that include styrofoam, steel, polycoat and all types of plastic containers. They have a battery recycling program and a light bulb exchange. Have a look at their site to see the numerous other steps they are taking to reduce waste.

I know the bottom line is always money and it is not cheap to implement these types of programs but I have to question the priorities of this city. We spent millions on the Krock, which lead to nothing but controversy but we can’t throw a few blue boxes on Princess Street? Yes, we can say we have this great arena now but when it comes to actually taking care of our city and our planet, I think Kingston has some serious catching up to do.