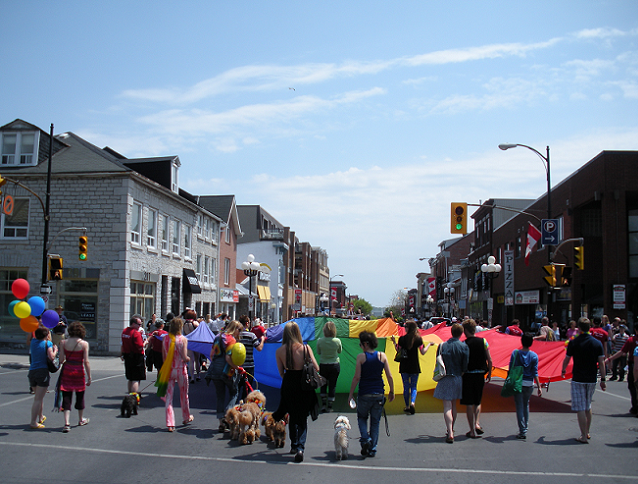 Happy Pride! This past weekend saw two amazing nights of fun and fabulousness as a part of the Kingston Pride festivities. What is Kingston Pride? Essentially it is the time of year where all the LGBTQ people of Kingston, as well as their friends and family, come together and celebrate their diversity and pride.

The fantabulous (yes, new word!) Out on the Queen: A Gay-La Cruise occurred this past Friday.  This event consisted of a three hour voyage on board the Island Queen, where I, Miss Tyffanie Morgan, performed alongside Jas Morgan, Kelly Dear, and dance sensation Nancy Rancourt.  The evening was so much fun, even the may flies decided to come out and party. I don’t think I’ve seen this many smiley, happy people on one small boat as I did on the Island Queen.

On Saturday, the 20th Anniversary Pride Parade made it’s way through downtown Kingston. Parade participants gathered at City Park, and we set off along Barrie Street, then down Princess, eventually ending up back at City Park for a picnic. We were joined by Capital Pride officials who are in charge of organizing Pride festivities in Ottawa. They brought a huge two lane wide pride flag that was warmly welcomed in Kingston. I had the pleasure of driving behind the flag in a convertible with Jas Morgan. A few images from the Pride Parade are now on Kingstonist’s Flickr.

Following the parade, Jas and the people of Kingston, recognized my years of service to the community by honoring me with the title of Miss Gay Kingston.  I was crowned and given my sash in City Park. The day couldn’t have been better.

In case you missed out, there are still many more events taking place this week.  There will be a Pride Boat in the annual Dragon Boat Festival this Saturday. Elvira Kurt will perform at the Time to Laugh Comedy Club, with two shows on Friday June 19th, and one Saturday the 20th.  There is also a final Kingston Pride extravaganza taking place on Monday the 22nd, where a locally made documentary will be screening, followed by a live performance by the New York-based band, MEN.  For a complete listing of all the upcoming events, be sure to check out:  KingstonPride.org.

One thought on “Kingston Pride”