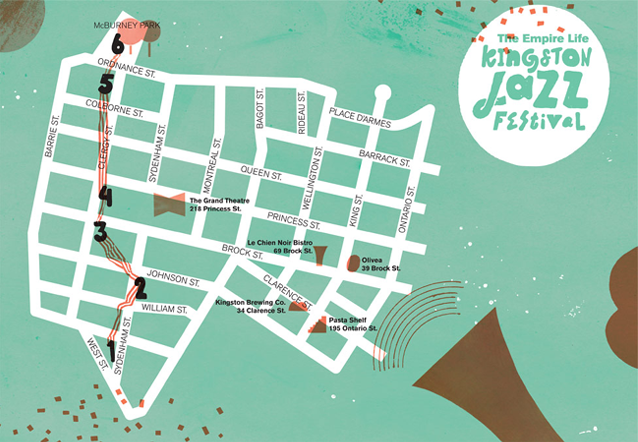 Next weekend is The Empire Life Kingston Jazz Festival from Thursday, June 21st to Saturday, June 23rd.  According to my calculations, this is the twelfth annual jazz fest – as long as I’ve lived in Kingston.  It’s been fascinating watching this festival grow over the years and I think it’s safe to say that this year’s line up is one of the most diverse and impressive.  The Kingston Jazz Society, The Grand Theatre and The Skeleton Park Music Festival have combined forces to bring some of the world’s most accomplished and unique performers to Kingston, and the best part is, you don’t have to choose.  Check out our guide to see who’s coming to town.


Thursday, June 21st | 7:30pm
Anat Cohen Quartet
An established band leader and prolific composer, Anat Cohen has established herself as one of the primary voices of her generation on both tenor saxophone and clarinet.

Jazz, Mix & Mingle
Intermission between performances in the Davies Lounge of The Grand Theatre

Friday, June 22nd | 9pm-10pm
The Downtown Trio
This local jazz trio (plus 1) plays a mix of jazz, blues and funk, standards and originals. The band is James Wannamaker on alto, tenor, and soprano sax, Sean Jensen on drums, Sean Fritz on guitar and Noah St. Amand on bass. You can also find them playing every Sunday at The Mansion from 3pm-8pm.

Saturday, June 23rd | 9pm-10pm
Jazz Trio
This local jazz trio consists of Jon “Bunny” Stewart on saxophone, Dave Barton on guitar and Paul Clifford on bass. You can catch these guys playing every other Tuesday at Olivea from 6pm-9pm.


Saturday, June 23rd | 12pm-2:30pm
This series of performances will take place on the porches of the beautiful B&Bs and homes of the Sydenham Ward. Porch jazz is a fun romp through the streets with pit stops for concerts along the way.  What Cheer? Brigade will lead the parade.  Bring an instrument and join in. At each location, local jazz ensembles will play a half-hour set – dance in the streets or bring a lawn chair and relax. Kid and family friendly!

This photo associated with today’s guide is from Kingston Jazz Fest’s site. Head on over there for more information and to purchase single tickets or festival passes.