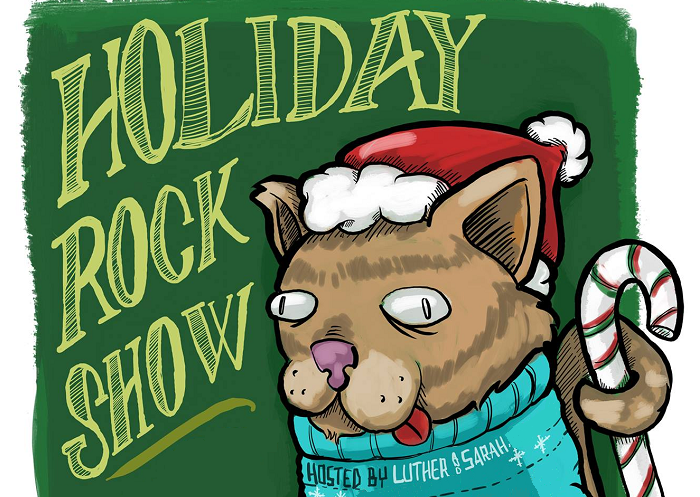 On December 22nd, Kingston’s annual Holiday Rock Show will once again return, now in its 21st year. This year, expect to see lots of familiar acts: Sarah Harmer and Luther Wright, Deck the Halls with Balls and Kelly featuring Brucey “the Git,” Emily Fennell, Rocket Surgery, and others.

“It’s very special getting to play with all of these people that are so talented in their own right,” says Greg Ball of Deck the Halls with Balls and Kelly. “It’s like my own little Christmas present.” Ball has been playing in the Holiday Rock Show for almost seven years, following an invitation by Sean Kelly to sing the David Bowie and Bing Crosby classic, “Peace on Earth/Little Drummer Boy”. Though Ball couldn’t perform that year because of an illness, the following year Ball and Kelly formed their band along with several other local musicians, and have been a fixture at the Holiday Rock Show ever since. “It’s really great, being involved with the like of Sarah Harmer and Luther Wright. It’s also kind of fun that so much of downtown moves up to Stages. I don’t even think I’d be allowed in Stages otherwise, because of my age,” he jokes.

Back when Weeping Tile began the show in the mid-1990s, it supported the Salvation Army and was known as the Sally Ann show for many years. The musicians of the show made the choice to begin supporting local charities rather than the Salvation Army in 2013. This year, proceeds will go towards Martha’s Table, homeless shelter Ryandale House, and support for Syrian refugees. All of the musicians donate their time, so all of the ticket sales will be donated. “It’s a big chunk of money for these charities right before Christmas,” says Ball. In the past, the show has raised as much as $100,000 for local causes.

While there are sure to be a few holiday tunes thrown in for good measure, you can expect that all of the acts will play fan favourites, with plenty of group jamming as well. Whether we hear Greg Ball sing any David Bowie though? Remains to be seen.

Tickets for Kingston’s Holiday Rock Show are available through Maple Music, Zap Records, The Brass, Stages, or the Grizzly Grill for $20. The show will be held at Stages Nightclub on Dec. 22. This is an all-ages show with doors at 7:30.