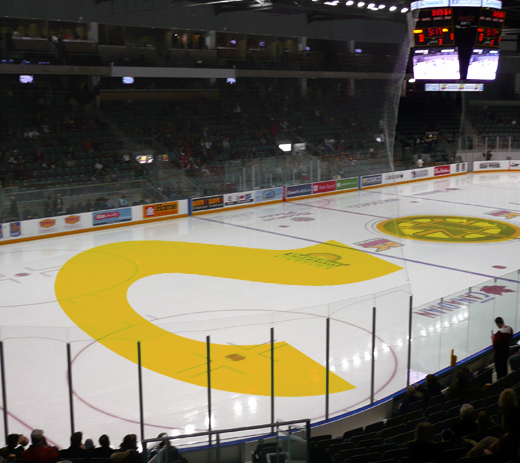 Save for including their home games on our events calendar, and mentioning that one time they tried to dress like Don Cherry, Kingstonist doesn’t write a great deal about the Kingston Frontenacs.  With ticket prices being a bit too much for my debit card, and a few less than exciting seasons over the past few years, I’m far from a regular fan.  In fact, although I was practically born and raised here, I have only seen the team play three times, most recently back in 2008 when they hosted the 67’s at the newly constructed KRC.  But that doesn’t mean I’m purposely ignoring the Fronts.  Quite the opposite, as I recently noticed that the team already clinched a berth in the playoffs.  While their post-season fate remains unwritten, this week’s poll question asks:

How far will the Kingston Frontenacs make it in the playoffs?

With the Vee’s continued success in the playoffs, Wolfe Island possibly emerging as Hockeyville 2011, and the Queen’s lady Gaels clinching bronze at the CIS Championships this past weekend, there’s been a heck of a lot of good hockey news in the Limestone City as of late.  In addition to all the on ice action, last week councillor Ed Smith ruffled some feathers when he called on the local community to essentially get over the debate/debacle concerning the placement of the K-Rock Centre, and embrace the award-winning facility.  Smith’s analysis of the performance of the KRC also included some criticism of the Fronts organization, as he stated that it was their responsibility to put together a first-class organization that’s fitting for the first-class venue built with Kingstonian’s tax dollars.

So what do you think? Will the K-Rock Centre’s primary tenant go far in the playoffs and inspire more Kingstonians to come out and support the team? Please share your thoughts on the Fronts, and the present state of the KRC with a few comments below.
Share
Tweet
0 Shares

6 thoughts on “Predicting the Fronts Post-Season”